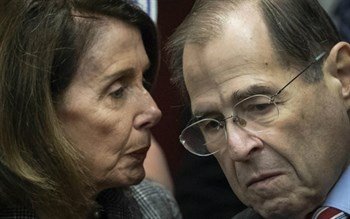 A founding member of the Department of Homeland Security and a legitimate whistleblower weighs in on the Left’s attempt to impeach President Donald Trump, saying the commander-in-chief presents an “unprecedented challenge” to them.

Phil Haney, the former DHS employee, admits the House can impeach the president for nearly any reason. While he believes they have the right to do it, he also argues that the actions against Trump are not in line with the focus and spirit of the Constitution.

Haney believes the Left could possibly find precedent to impeach Trump based on other public figures who have been impeached for behavior or actions that are unbecoming of the dignity of the office. Yet, he questions whether the effort could actually be successful. Personally, he doesn’t believe Trump will be impeached, but he does understand Congress has the right to do it.

“There may be some deeper level, cynical subplots going on that are actually part of a calculated move [to move forward with impeaching the president],” Haney suggests. “However, they’re so far out on the edge that they’re really playing with fire – and it will backfire on them.”

Haney contends “impeachment is the paradox of liberty,” pointing out that America has the liberty and the form of government that allows participation in the political system.

“The paradox of liberty – what do you do with it?” he asks. “Do you squander it with frivolous frenzies and outbursts of psychosis like what we’re seeing? Or do you use this magnificent gift in a constructive way for the good of the people?”

On the “other side of the paradoxical coin,” Haney says no other issue is built into the structure of the Constitution that illustrates how important it is to have a true, grassroots movement by the people to harness the erroneous actions of the government.

“There is no other issue that cries out for grassroots involvement more than impeachment,” he continues. “[And it] is the litmus test of real liberty.”

The reasons being used by Democrats in their call for impeachment reveals their worldview
and values, Haney attests.

“The fact that the Democrats are trying to impeach Trump shows you not only what their values are with President Trump, but also marginalizes every single person who voted for him or supports him,” he tells OneNewsNow.

“[The supporters of impeachment] don’t care what the American people have said. They insist they know better and they’re willing to disenfranchise the greater majority of the American public in our effort to impeach President Trump. That, my friend, is the
paradox of liberty.”

Haney is convinced the effort was fast-tracked with the complaint of a “so-called whistleblower.” He describes this person as a “composite” – and he doesn’t believe the perpetrator is a true whistleblower, but “an opportunist and an operative.” He believes this operative was mostly likely sent into the White House by John Brennan (former director of the CIA) to gather intel.

While those in the opportunist’s circle may or may not have been cooperative participants, Haney argues “it is evident the opportunist gathered information, compiled it in some certain way and then handed it off to his roster of associates” – whom he believes very likely included people like Democratic lawmakers Adam Schiff, Jerrold Nadler, Nancy Pelosi, and Chuck Schumer.

Haney notes a key indicator to corruption in the form of a tweet by Adam Schiff on August 28, 2019 – a tweet sent prior to the whistleblower report becoming known.

“This points the needle in the direction the whistleblower was already in direct contact with Schiff,” Haney concludes. “The whistleblower is a composite, an operative, and not a true whistleblower – and that’s based on my hard-earned, costly insight from the experiences that I went through [as a legitimate whistleblower].”

“Today,” Haney states, “I see all this virtue signaling, protecting the integrity of the whistleblower, showing how heroic and martyr-like he is — but the fact of the matter is, Adam Schiff is desperate to protect the whistleblower, because in the process he’s protecting himself and a number of others.”

Haney believes that when the whistleblower actually comes out and is forthcoming in directly answering questions before committees, it will be revealed that he had previous contact with the likes of Schiff, Nadler, Pelosi, Schumer, and others prior to ever filing the report.

“All indications tell me he was specifically chosen and selected, deliberately and intentionally inserted into the inside workings of the White House to do exactly what he did,” Haney surmises.

“It is also important to logically conclude President Trump began securing transcripts of his conversations, because they kept getting leaked.”

In a similar vein, Haney suspects Trump already knows who the whistleblower is or at least has a “short list.” He contends that when Trump says he wants to know who the whistleblower is, it’s to “get a sense of the reaction of the virtue signaling that inevitably follows when he makes any kind of a statement – because we all know it doesn’t matter what he says, he’s going to get a hysterical reaction from the Left.”

Haney concludes by saying there is a reason for hope.

“We have reason for hope because we live in a country that allows us to participate in the protection of our own liberties,” the former DHS employee shares. “If we had no recourse and had to just sit there and watch the Democratic Party pick the president apart piece by piece until they destroyed him, we would have no reason for hope.”

“[But] we live in a country with an incredible heritage and ideology that was defined by the founding fathers, which allows us to participate in the defense of our own liberties – and that’s a rare thing. Consider what’s happening in Hong Kong this very day.”