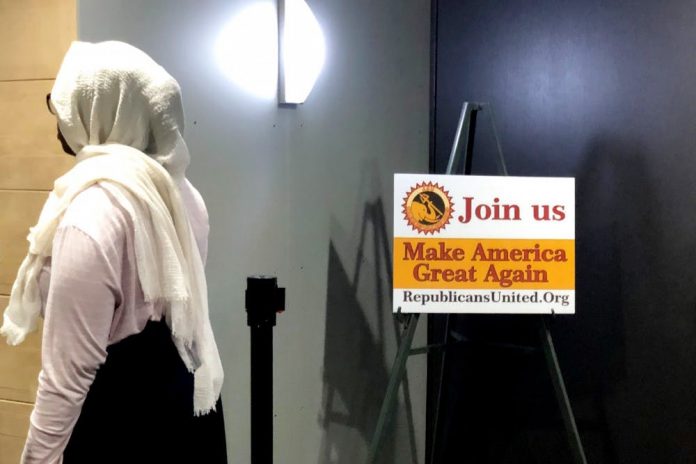 Dr. Carl Goldberg responds to the attacks on him and his presentation at a speaking event at ASU, October 2, 2019.  Dr. Goldberg has studied Islam and spoken to numerous organizations to educate about the threat of Sharia being promoted by the Muslim Brotherhood organizations across America, who have a goal to implement Sharia over the U.S. Constitution.  They are doing stealth Influence Operations in local communities, churches, synagogues, and in schools to affect the children with a final goal to re-make America.  Dr. Goldberg has impeccable credentials to speak on the tenets of Islam to anyone that will invite him to speak.  The question that should be asked is:  What are you afraid of?  Why can’t ANYONE speak about Sharia Islam?  Non-Christians speak about Christianity all the time!  Non-Jews speak about the Jewish community as well.   #MakeAmericaTHINKAgain!

I just read your article about my appearance on Wednesday. While you artricle is vastly improved over the scurrilous article by Alexia Isais (https://www.statepress.com/article/2019/10/spopinion-college-republicans-united-promoting-islamophobia), your article is still agrossly unfair because you did not give me any chance to comment. I understand your desire, and obligation, to present your fellow Moslems in the best possible light, but, as a public writer, you are also obligated to observe some sense of fairness and journalistic integrity.

Let me make a couple of comments on what you wrote:

1) You quote the Council on American Islamic Relations as if they are some source of authority. You did not say that CAIR was declared to be a terrorist organization by the Moslem country, United Arab Emirates. You did not say that CAIR is an offshoot of the terrorist Hamas, which itself is the Palestinian branch of the Muslim Brotherood and that the Muslim Brotherhood was declared a terrorist organization by Moslem Saudi Arabia, Moslem Syria, Moslem Egypt, Moslem United Arab Emirates and Moslem Bahrain. Are they all Islamophobes?

2) You published a comment by the College Republicans to the effect that Omar Tawil denounced Hamas and Hezbollah. This is greatly misleading because CAIR and the American Moslem community on the whole supports Hamas. I am certain that Imam Shqeirat does NOT condemn Hamas.

3) Omar Tawil and you and Aamirah Chisti are wrong to portray my presentation as being my “unqualified” opinion about Islam. I made it perfectly clear in my presentation that I am not giving my opinion about Islam. On the contrary, I cited the most sacred and the most respected Islamic religious authorities throughout the ages who know more about Islam and who enjoy much wider respect in the worldwide Islamic community than Omar Tawil ever will. Tawil never dealt with the qualifications of those great Islamic religious authorities because he can’t. It is much easier for him to discredit me falsely.

4) You cited Tawil’s attack on me for using translations, but that is another false argument because the translations are made by Moslem linguistic experts and endorsed and distributed by the mosques and other Islamic religious institutions and publishers. Tawil never pointed to anything that was mistranslated; he only insinuated falsely that there was something wrong with the translations. Because those translations are made and endorsed by the Islamic religious establishment, we have a right to trust them as being accurate. By the way, about 5/8 of the Islamic world does not speak Arabic. How do they know anything about Islam? Only through translations. Also, the majority of Moslem terrorists are Arabs who do not read the Islamic writings in translation. They understand the original Arabic writings to command them to make war on non-Moslems.

5) The Sharia law manual which I showed to the audience and quoted from, Reliance of the Traveller, was approved by the highest Islamic religious authorities of Saudi Arabia, Jordan, Syria, Egypt and America as a guide for Sunni Muslims today, even though it was written several hundred years ago. This manual is used in American mosques including the mosques in Phoenix. For Omar Tawil to imply that there is something unIslamic about this manual is a form of permissible Islamic lying which is described in the manual itself.

6) Just about the only truthful thing which Omar Tawil said was that sharia law legislates behavior, not identity. That is precisely the point that I made, although Tawil said it in a way as if to imply that I said otherwise. Sharia law is totalitarian because, in the words of the Islamic religious authorities, it covers all aspects of a person’s life down to tiny details — and, because it legislates behavior, Moslems are obligated to submit to this totalitarian regime which denies them freedom of choice over any aspect of their lives. This is what happens when the Islamic religious authorities have the political power to enforce sharia law. If Moslems have a choice in America to follow or not to follow sharia law, that is because America is a Judeo-Christian country with a secular constitution.

7) As for Aamirah Chisti whom you quoted against me, you might notice that she did not supply a single detail about how I misrepresented Islam. Not one! Because, she can’t! Everything I say about Islam comes straight from the most respected Islamic sources, not from me. If she thinks that THEY misrepresent Islam, she needs to show how she is right and the most respected Islamic religious authorities are wrong. All Aamirah Chisti can do is to make a generalized and false accusation without a shred of evidence.

8) Finally, we should mention that the Muslim Student Association was the first Muslim Brotherhood front group founded in America, according to the Muslim Brotherhood’s own documents. Their credo since 1928 has been: “Allah is our purpose, the Prophet is our leader; the Koran is our law; Jihad is our way; and dying for Allah is our highest hope”.Which part of that credo does Imam Omar disagree with? Which part of it does Aamirah Chisti disagree with? Which part do you disagree with????

P.S. Attached is my entire presentation in case you are interested. (see below)

Have you really no sense of integrity or even decency? “Goldberg did not respond to request for comment by the time of publication.” Neither YOU, nor anyone else, ever asked me for any comment! Therefore you are lying about me.

You also did not even hint that I cited the most respected Islamic sources who tell us that Islam is a totalitarian and imperialist ideology, Yes, those are the exact words of the Islamic religious authorities! Are THEY Islamophobes ????

Instead, you talked only with Aamirah Chisti, the president of the Muslim Students Association. You should know that the MSA was the first Muslim Brotherhood front group established in America, according to the Muslim Brotherhood’s own documents. The Muslim Brotherhood has been declared a terrorist organizations by four MOSLEM countries: Bahrain, Egypt, Saudi Arabia and the United Arab Emirates. Are THEY Islamophobic???

You accuse me of “demonizing Muslims”, but I did not do any such thing, and you cannot produce a single quotation from me which supports your false accusation. You referred to a dishonest article by Elizabeth Whitman in the New Times. How dare you use her as a source to slander me!!

Contrary to what you wrote, I am not “Arizona’s chapter leader of ACT for America”, and to call Act for America “an extremist hate group” is pure slander. You cannot produce a single statement from Act for America that justifies such a lie on your part.

And, by the way, there was no debate last night because I was not permitted any time to rebut the imam’s comments. The event was billed as “Conversation with Islam”, but because of the way it was structured, there was, in fact, no conversation and no debate.

In case you are at all interested in what I actually said last night, see the attachment. The imam did not deal at all with what I presented from the Islamic sources.

You should be ashamed of yourself for what you wrote.