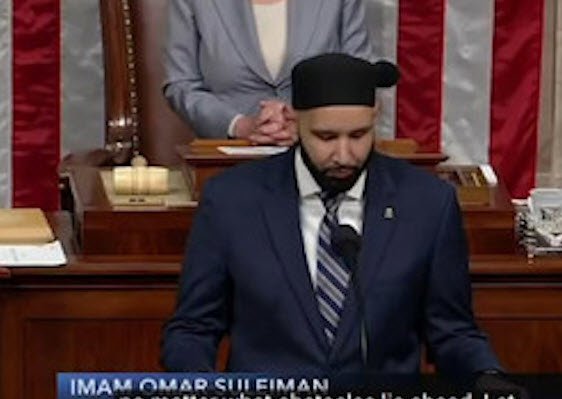 Imam Omar Suleiman was granted the privilege of giving an invocational prayer to the U.S. House of Representatives on Thursday, May 9, 2019, under rather ordinary circumstances:

Suleiman’s congresswoman, Rep. Eddie Bernice Johnson, D-Texas, invited him to deliver the prayer through a standard form on the webpage of the Office of the Chaplain of the House, according to a congressional official.”

Relying upon Islam’s quintessential defining sources—the Koran itself, and the traditions of Islam’s prophet Muhammad or “hadith”—Omar Suleiman analyzes the so-called “Bani Israel,” Jews, as depicted in these canonical texts. The crux of Suleiman’s analyses comport with classical and modern authoritative Islamic teachings on the ancient-cum-contemporary indelible characteristics of the vast majority of Jews. Suleiman lays out the thesis he develops in two queries, and a statement, from the opening lecture:

Why was an ummah that was so large and blessed with so many prophets—imagine how many thousands were sent to Bani Israel—Why was this ummah eventually stripped of prophethood and what caused them to bear the wrath of Allah as an ummah [religious community]?…The entire theme of the Bani Israel is that they were given multiple blessings and they did not respond in the way that they were supposed to.

Indeed the notion of the Jews “incurring Allah’s wrath” is a conception  the Koran’s own very short “Fatiha” or opening sura (chapter), in its 7th verse [Koran 1:7]  which pious Muslims repeat 17-times a day, puts forth.

The Qur’an: An Encyclopedia is a modern authoritative compendium of analyses written by 43 Muslim and non-Muslim mainstream academic experts, edited by Oliver Leaman, and published by Routledge, New York, 2006. These extracts from p. 614 serve as an irrefragable “final summary verdict,” derived from over a millennium of authoritative exegeses or glosses on Koran 1:7 describing  how Muslims and non-Muslims alike are to understand Koran 1:7, the Fatiha’s last verse:

…[T]he phrase in the daily prescribed prayers ‘Guide us to the straight path, to the path of those you have blessed, not of those who incurred [Your] wrath, nor of the misguided (al-Fatiha, 1:5–6–7.)’…mention two groups of people but do not say who they are. The Prophet [Muhammad] interpreted [in a canonical hadith; Tirmidhi, Hadith 2-2953] those who incurred God’s wrath as the Jews and the misguided as the Christians. The Jews, we are told [i.e., in both the Koran, and hadith] killed many of their prophets, and through their character and materialistic [2:96] tendencies have contributed much to moral corruption, social upheaval and sedition in the world [5:33; 5:64]…[T]hey were readily misled [9:30] and incurred both God’s wrath and ignominy [2:61; 3:112].”

Jewish “ignominy” or humiliation in canonical Islam, and Suleiman’s fidelity to this theme, is coupled, as he also observes, with Islam’s replacement theology. Muslims, Suleiman notes are “the best nation,” [Koran 3:110], while the Jews “are consistently being admonished and chastised in the Koran,” one such admonishment occurring in immediate juxtaposition to 3:110, at verse 3:112, which condemns the Jews, as Suleiman also reminds us, repeatedly, for disbelieving and disobeying Allah, transgressing his will to the extent of killing Allah’s prophets. Thus Abraham, “Ibrahim” in Islam, epitomizes Islam’s primordial supersession of Judaism (and Christianity), and Suleiman avers, with “Islamic correctness,” per Koran 3:67, he was “not a Jew,” debunking “this misconception,” rather a pious Muslim.

In prelude to his discussion of Allah’s “very dramatic action” against a particular group of Jews—transforming them into apes and pigs [Koran 7:166, and 5:60]—Suleiman elucidates what characterizes most Jews—past as prologue—with Koranic indelibility:

The majority of the people we are talking about obviously, to take lessons from them, we’re not gonna focus on those few good people, few bright spots, but rather focus on mistakes that they [i.e., most of the Koranic Jews] make.”

Suleiman then invokes two Koranic depictions [Koran 2:96 and 2:88], bolstered by an illustration from the canonical hadith [Bukhari Volume 4, Book 55 Prophets 615] which demonstrate their inveterate worldliness, “dunyā,” and resultant deceit.

They had an unusual love for the life of this world and the head [source] of [their] every mistake is loving this life too much and hating death. So we find that all of the trickery [deceit], and all the mistakes that they [the Jews] made stem from their love of dunyā [earthly concerns]”

Referencing the Koranic narrative from sura 7 [7:163–7:166] about the Jews deceitfully laying out nets to avoid “Allah’s” prohibition against actually fishing on the Sabbath, and also citing Koran 5:60, Suliman provides these details:

Allah says, ‘We told them to become apes,’ [7:166] Allah transformed them, this group of people that took that action into apes and pigs [5:60]…which means their external appearance became apes and pigs, and the idea here was that the people were trying to make Allah out to be a fool, but Allah instead transformed them into animals…The prophet [Muhammad] tells us that these people, which were a village, not the entire Bani Israel, this was a group of Bani Israel, that Allah, after he transformed them, they lived three days as an example to all other people. The older ones were transformed into apes.

Following a brief excursus on why it is inaccurate to refer to contemporary Jews as “sons of apes and pigs,” Suleiman references a hadith [cited by the great legist/philosopher Ibn Rushd, “Averroes”, and here] which illustrates yet another example of Jewish deceit, and the appropriate response of Muhammad’s youngest wife Aisha, who condemned her Jewish interlocutors as brethren of apes and pigs.

She [Aisha] called them brothers of apes and pigs—she didn’t call them the sons.

This usage, “brothers of apes and pigs,” Suleiman maintains, is appropriate for most Jews, given their inveterate Koranic predilection for deceit, endeavoring “to take Allah for a fool.” Indeed, according to the earliest sacralized, pious Muslim biographies of Muhammad (by Ibn Ishaq and Ibn Saad),  just before subduing the Medinan Jewish tribe Banu Qurayza, Islam’s prophet invoked  this striking Koranic motif for the Jews debasement, addressing these Jews, with hateful disparagement, as “You brothers of apes (per Ibn Ishaq),” or “Brothers of apes and pigs. Fear me, fear me.” (per Ibn Saad). Ibn Ishaq’s account further maintains that, upon their surrender, Muhammad himself beheaded between 600 to 900 of the adult Jewish males of the Banu Qurayza, and enslaved their wives and children. Moreover, Suleiman’s understanding of this Koranic epithet is validated by its classical exegesis in the seminal Tafsir al-Jalalayn, which remains one of the most popular, as well as the most authoritative Koranic commentaries in contemporary usage. Here is the gloss on Koran 5:60 from Tafsir al-Jalalayn:

[5:60] ..those whom Allah has cursed and put far away from His mercy and with whom he is angry—turning some of them into monkeys and into pigs by transmogrification—and who worshipped false gods. These are the Jews…“False gods” refers to Shayṭān [Satan]. They [the Jews] worship him by obeying him. Such people are in a worse situation—because they will be in the Fire—and further from the right way (the Path of the Truth) [i.e., Islam]

The historical treatment of Jews in Muslim societies, since the advent of Islam—chronic oppression, punctuated by outbursts of mass anti-Jewish violence, forced conversion to Islam, or expulsion—has resulted from this sacralized religious bigotry. Thus the dehumanizing Koranic references to Jews as apes (or apes and pigs) were used explicitly for polemical incitement to large scale, annihilationist pogroms against dhimmi Jewish communities in Granada (within mythically “tolerant” Muslim Spain) during 1066, Baghdad and its environs, proliferating into Iran, at the end of the 13thcentury, and southern Morocco at the close of the 15th century. Echoing Muhammad—and Omar Suleiman—present era ad nauseum repetition of these Koranic epithets for incitement of Muslim Jew-hatred by three year-old Muslim children, to Sunni Islam’s Papal equivalent Al-Azhar Grand Imam, has also included then Sudanese dictator Omar al-Bashir’s  vitriolic call for an annihilationist jihad against Israel during a speech delivered at the headquarters of the ruling Islamic party in Khartoum, broadcast live by Radio Monte Carlo on April 5, 2002:

Let us prepare ourselves for the decisive battle against the Jews, those apes, pigs, and worshippers of calves. This should be a decisive battle…There will be no peace with the Jews…This battle is the battle, and this jihad is the jihad.

Ultimately, Omar Suleiman’s 2012 discourse on the Jews is open and unabashed in directing his canonical Islamic Jew-hatred, especially the requisite “humiliation,” at the state of Israel, and all Jews who support its right to exist.