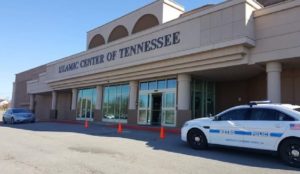 I, Paul David Gaubatz, declare under penalty of perjury that the following statements are true and correct and based on my own personal knowledge:

This sworn affidavit pertains to Islamic Centers operating within Nashville, Tennessee, and the local authorities who are in my professional opinion jeopardizing the lives of innocent Muslim children at Al Farooq Nashville, the citizens of Nashville, and our country.

2. In addition to my top secret/SCI clearance, I was also briefed into many programs known to the public as Black Projects. These projects pertained essentially to Counter-intelligence and counter-terrorism issues.

3. On 11 Sept. 2001. I was assigned as an (1811) civilian Federal Agent in Albuquerque, NM. I had primarily been assigned the duties of Technology Protection in regards to our countries highest classification of technologies used to defend our country.

4. After the attack on our country (11 Sept. 2011) I was assigned counter-terrorism duties on a full time basis and in late 2001 assigned to the Foreign Service Institute (U.S. State Department/Arlington, VA). My duties were to train full time in Arabic and counter-terrorism issues. The Arabic language was almost one complete year. During this time period I was sent to Jordan for a three week ‘immersion’ program to better understand the Arabic language the culture, and Islam.

5. In Jan 2003, before Operation Iraqi Freedom, I was requested to deploy as a U.S. civilian Federal Agent to ArAr Air Base. Saudi Arabia (within a few miles of Iraqi border). My full time duties were to collect intelligence involving potential attacks against U.S. Armed Forces personnel and to conduct counter-espionage against Saudi Arabian government/military, Iraqi and other people in the ArAr area, I led several counter-terrorism/counter-espionage expeditions.

6. From Apr – Jul 2003, I was assigned inside (Nasiriyah, Baghdad, Basrah, and other cities) Iraq and my primary duties were counter-terrorism and counter-intelligence.

7. While in Iraq I interviewed numerous Iraqis in regards to terrorism against the US, the Islamic ideology pertaining to violent Jihadists activity and the methodology of Islamic terrorists.

8. While in Iraq I had the opportunity to discuss the training and tactics used by Islamic Terrorist leaders and their supporters.

9. I have received training on the Islamic terrorist ideology/tactics from people who were former members of Islamic terrorist groups and from Muslims who were investigating these groups themselves. These people included military and police officers who served under Saddam Hussein (former Iraq President).

10. Since returning from Iraq in 2003. I have trained over 2500 U.S. law enforcement officers in counter-terrorism involving Islamic terrorist groups and their supporters.

11. I have discussed Islam and Sharia law with over 100 Imams and Islamic leaders in the U.S.

12. I have listened to over one thousand plus hours of lectures by Islamic scholars/leaders that have been trained in Saudi Arabia, Pakistan, Egypt and Iran.

13. I have read over 5000 different publications, books and brochures by Islamic scholars.

14. In 2005. I hired a senior Council on American-Islamic Relations leader to provide me training on the operation of this Islamic organization.

15. I have personally conducted first-hand research at over one hundred plus Islamic Centers in the U.S. The research involved speaking with the leaders, worshippers and reviewing the materials they use to educate their worshippers (men, women and children).

17. I have received numerous U.S. Government awards pertaining to my work in protecting our country, our technology. and U.S. Armed Forces personnel.

18. I have worked jointly in counter-terrorism research and investigations with Muslims and non-Muslims.

19. My research is not biased. I credit the saving of my life and the saving of many U.S. military personnel lives with several Muslims who risked their lives to protect ours. These Muslims and I both realize there are Islamic groups, their supporters, and Islamic scholars based in the U.S. that do advocate violence against innocent men, women, children, and pose a ‘grave’ security risk to our country.

20. In March and April 2009, (last day of research was on 18 Apr 2009) I conducted first-hand research at the Al Farooq Islamic Center, 1421 4th Ave. South. Nashville. TN. and businesses in the Nashville area operated/supported by the leadership of Al Farooq and its worshippers. The research involved speaking with leaders. worshippers and reviewing the materials this Center and businesses use to educate their worshippers.

21. Based on my qualifications listed in numbers 1 through 19, it is my professional opinion the leadership of the Al Farooq Islamic Center, 1421 4th Ave South, Nashville, TN.

A: Does advocate violence against innocent Muslims and non-Muslims that do not adhere to and desire an Islamic Ummah (Nation) under Sharia Law in America.

B: Does advocate treason and sedition against the U.S. using violent and nonviolent tactics/methods as do such Islamic terrorist groups as Al Qaeda have and currently utilize.

C: Does pose a serious risk of educating innocent Muslim children into the violent aspects of Islamic terrorist groups and their violent activities directed against America.

D: This Islamic Center uses materials from convicted terrorist and supporters to educate their worshippers.

F: The leadership hit the children during study of the Quran and Sharia law and an audio/video was obtained as evidence.

G: The leadership is openly involved and advocates polygamous marriages, allegedly with children as young as 7 years old. A child at Al Farooq had mentioned her husband. This is also on audio/video.

H: Additionally, it is my professional opinion this Islamic Center has the support of personnel within the Nashville Metropolitan Police Department and/or Nashville Prosecutors Office.

I: I have been informed a Nashville Metropolitan Police officer fears lawsuits front CAIR and they are involved in ‘Interfaith’ meetings with Nashville Islamic scholars.

J: The Child Protective Officer who allegedly investigated the child abuse at Al Farooq conducted a poor job at best, and does not understand the Islamic ideology or Sharia law.

K: Recommendation to law enforcement: Conduct a thorough investigation of Al Farooq and its leadership (using federal or state authorities) due to the possible criminal violations by Metropolitan Police Personnel, Child Protective Services and the local Nashville Prosecutors office.

M: My understanding is no formal investigation was conducted by law enforcement although more than sufficient probable cause evidence was provided by me to the authorities.

N: Somali owned businesses are involved in money laundering and support violence against innocent men, women and children who oppose an Islamic Ummah (Nation) under Sharia law within America.

22. Overall, I rate this Islamic Center and their related businesses located along Murfreesboro Pike, Nashville, TN as ‘High’ in regards to posing a threat to the security of the United States.

23. Overall, I rate the local authorities as a ‘High’ risk to the security of the innocent Muslim children at Al Farooq, to the citizens of Nashville and our country. This is based on my interaction/assessment of the local Nashville authorities. They are poorly trained in regards to understanding the mindset/ideology and tactics of Islamic terrorist groups and their supporters. The local authorities are intimidated by Islamic lenders/organizations. and are possibly illegally protecting the Islamic scholars from a thorough criminal investigation.

24. As stated above this assessment and professional advice are based on my qualifications as listed in numbers 1-19 above.