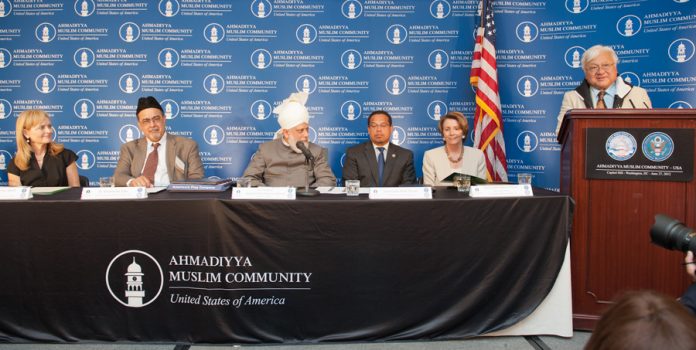 “In the West they present themselves as women-friendly and in their own land as misogynist,” observed Sabatina James, an Austrian-Pakistani Muslim convert to Catholicism, about the Ahmadis in a 2013 online video. Her video indicates just how unreformed Ahmadi views about sexuality and gender equality can be for this previously examined small, yet often influential, Muslim sect that has cosmic caliphate visions.

James cited an Arabic internet conversation in which Ahmadis approved Quranic verses calling for whipping adulterers, an example of the Ahmadis’ Islamic orthodoxy concerning sexual matters. Pastor Andreas Volkmar confirmed her views in a 2017 study for Germany’s Independent Evangelical-Lutheran Church (Selbständige Evangelisch-Lutherische Kirche). “The Ahmadiyya hardly differ from traditional Islam in what concerns the relationship of the sexes and the role of woman.”

As also observable by other Muslim organizations, the relationship of women and men is discussed almost exclusively in the categories of a sexual decency discourse. We find with the Ahmadiyya a Manichean moral dualism and downright an obsession with the ‘dangerous’ sexuality of the woman, which is always to be channeled and hemmed in with strict commandments.

Volkmar in 2017 repeated verbatim Kandel’s 2006 assessment that the Ahmadis practiced “on the basis of Koran and Sunna a rigid morality of obedience of the woman towards the man and gender separation.” Therefore Volkmar noted that the “wife owes the husband at all times obedience, including in a sexual respect. If she does not fulfill her duties, there exists in principle the right of chastisement according to Surah 4:34.”

Likewise, Volkmar observed that the “Ahmadiyya community observes strict separation of the sexes and positions itself decidedly against Western society, which is presented as sexually-obsessed and depraved.” Thus the Ahmadis “support removal of teenage girls from swimming, physical, and sex education,” while “veiling counts as an assumed clothing duty.” The late (d. 2010) German scholar of Islam Hiltrud Schröter, author of a 2002 book on the Ahmadis, additionally noted that the Ahmadi community “propagated a special kind of jihad, the ‘jihad against being unveiled.’”

The Ahmadiyya community observes strict endogamy: Ahmadis may only marry women from the own community. Marriage with a non-Ahmadi entails exclusion from the community. Marriages are arranged [and “are for Pakistanis an immigration ticket to Germany,” Schröter noted], girls raised from childhood on in the Muslim obedience culture. Polygamy is viewed in principle as possible and sensible.

Additionally, Ahmadi understanding of Muslim sexual mores have had bizarre results. In 2007, a German Ahmadi youth publication caused uproar in Germany with an article’s claims about pork consumption, prohibited by Islamic dietary regulations as non-halal. Supposed causality existed between the pigs’ filthiness and the stimulation of homosexuality in pork eaters.

Such Ahmadi realities belie the positive gloss Ahmadi leaders such as the current Ahmadi “caliph,” Hadrat Mirza Masroor Ahmad, attempt to give Islamic doctrine. Speaking at Hamburg, Germany’s Ahmadi Baitur-Rasheed Mosque in 2012, Ahmad noted common Islamic apologetics about how “Islam has given women dignity and honor.” He argued that “Islam gave a woman the right to divorce her husband due to wrong behavior, at a time when women were considered merely a possession or chattel,” without noting how Islamic divorce often allows husbands to exploit wives. He added that “Islam gave women the right to inherit at a time when women were deemed to have no status or worth,” while ignoring that inheritance in received Islamic orthodoxy favors males over females.

Ahmadi morality concerning sex and gender once again reveals stark gaps between the appearances of worldwide Ahmadi public relations and actual Ahmadi practice. Accordingly, public imaginations of Ahmadis as Islam’s avant-garde require critical revision. This is no less true when Ahmadis join other Islamic apologists in retailing common falsehoods about Islamic doctrine and history, as the next article in this series will examine.