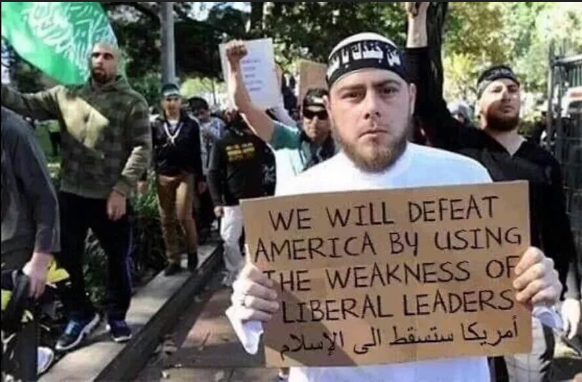 The Islamic conquest in America has made great strides in less than two decades since 9/11, just eighteen years ago. This month’s recap is testament to how quickly we have forgotten.

Click any link below for more details and link to original source.

Dilkhayot Kasimov, 31, from Uzbekistan, worked to support ISIS by collecting and giving money to another Muslim jihadi to reach ISIS.

Hester indicated that he had converted to Islam, expressed animus toward the United States

Alani shared videos of ISIS murders and made statements wishing Allah would use “divine powers” to harm non-Muslims.

Jihad-financier Alaa Abu Saad was president of the Muslim Student Association (MSA) at the University of Alabama.

Alabama: Jordanian Muslim who grew up in Saudi Arabia arrested in terrorism probe

A North Texas man was sentenced today to 240 months in federal prison for conspiring to provide material support to Lashkar-e-Taiba, a Pakistani-based foreign terrorist organization also known as LeT

New York: Muslim refugee – a trained ISIS sniper – admits he would ‘take up arms’ if released

A Muslim refugee from Kazakhstan admitted he would “take up arms” in support of Islamic State again if he was released. Deport him and his family ASAP.

Police are searching for a man who walked into a New York City mosque and asked an imam to help him blow up an NYPD precinct.

Muslims from Chicago, NYC, Minneapolis in Syrian prison for ISIS jihadis want to return to US (Video)

Jihad-waging Muslims who claim to have resided in Minneapolis, Chicago and a family from NYC are mentioned in the clips linked above.

“I did it,” Sahi said through the translator. “Whatever they’re charging me with is correct.”

Did Mohammad Sahi ‘honor kill’ his daughter and her son, and severely injure another man? Will anyone dare ask the question?

Minnesota: Iranian Gets 27 Months for Facilitating Illegal Export of Technology to Iran

Negar Ghodskani sentenced for illegal export of controlled technology from the US to Iran. But will she be deported?

Legal or Litigation Jihad in America:

Prison Jihad is a real problem.

Muslims Over-Represented In State Prisons; In 5 States, 20% or More Are Muslim

California: Jihadist’s Prison Release Shows Just How Unprepared We Are

Tennessee: Another Muslim immigrant wins an election, this time in Nashville

60 Muslim Refugee-Jihadis Caught in the U.S. Profiled in New Book

Dhimmitude and Jihad in Government

Two rare victories against the jihad in September: