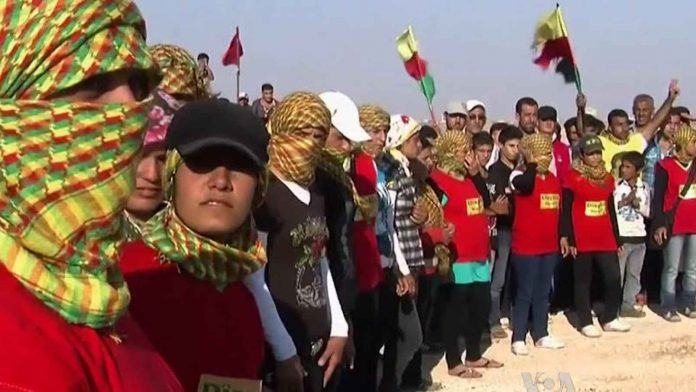 Depredations based on Sharia.

Largely autonomous Iraqi Kurdistan is a Sharia-based society, per its own Constitution, (Articles 6 & 7):

This Constitution confirms and respects the Islamic identity of the majority of the people of Iraqi Kurdistan. It considers the principles of Islamic Sharia as one of the main sources of legislation… It is not allowed to enact a law inconsistent with the provisions of the fundamentals of Islam. (Articles 6 & 7)

Not surprisingly, given historical Sharia mores, the attendant legacy of Islamic attitudes towards non-Muslims, overall, including Jews, and Islam’s own intrinsic theological Jew-hatred, here are the current prevailing conditions for the tiny vestigial remnant population of mixed “Jews” of Kurdistan, forced to “practice” their faith surreptitiously, as reported less than a year ago (11/30/2018), by the Kurdish media outlet, Rudaw:

“They call us ‘Ben Jews’ or ‘Sons of Jews’ because we are mixed Jews, Kurds, or other ethnicities.” . . . They keep their Jewish identity hidden for fear of persecution. They meet for Shabbat – the holy day – at a different home every week. Religious celebrations like Hanukkah and Passover are often celebrated privately inside the home of someone within the community. The event on Friday was organized by many people from the community, but “they didn’t want to give their name or picture because of the dangerous situation.”

Anti-Defamation League (ADL) 2014 polling data from Iraq on the prevalence of extreme Antisemitism, are entirely consistent with the reported self-protective behaviors of Kurdistan’s Jews seeking to avoid persecution from the overwhelmingly Kurdish Muslim population. In brief the ADL surveys the prevalence of those who agree with at least 6 out of 11 Antisemitic stereotypes (for actual questionnaires and embedded pdf files of the surveys, see this blog). In each country, including Iraq, the following survey methods were applied to ensure that all regions are sampled in a representative and balanced manner. This would necessarily include Iraqi Kurdistan.

Telephone interviewing was only conducted in countries where the combined mobile phone + landline penetration exceeded 90%. In all countries where telephone dialing was conducted, interviews were collected using a combination of landline and mobile phone dialing, in proportion to that particular country’s coverage rate for each telephone type. Within each country, the data was weighted to be reflective of the national population on a number of demographic measures, including age, gender, religion, urban/rural location, ethnicity, and language spoken. In an overwhelming majority of the countries/territories polled, the samples are fully nationally representative.

The bottom line: 92% of Iraqis exhibit extreme anti-Semitism, the world’s second highest rate of this hatred after the Palestinian-controlled areas.

Past as prologue, here are first-hand accounts of the oppression experienced by Jewish communities under Kurdish dominion not only in Iraqi Kurdistan–where Jewish families existed as chattel, well into the 19th century–but also Turkish Anatolia, and eastern Turkey, during the mid-19th through early 20th centuries, which led to their liquidation by massacre, pillage, and flight.

The Jews scattered here and there [in Kurdistan], and forced to remain at the places assigned to them, are in the true sense of the word, surrounded by tribes of savages. One often finds five, ten, or even twenty Jewish families the property of one Kurd, by whom they are burdened with imposts, and subject to ill treatment. Heavy taxes are imposed upon them, which for the poorest, amount annually to 500 piastres. Finally, they are compelled at different periods of the year to perform serf-service, to cultivate their master’s field, without receiving or being entitled to demand the smallest compensation for their labor. This is really an awful state of affairs and with heart and soul do we sympathize with our distressed coreligionists and we felt deeply grieved that it was not in our power to help them. . . . The [Kurdish] master has absolute power of life and death over his [Jewish] slaves; at his will he can sell them to another master, either in whole families or individually. [p. 658, The Legacy of Islamic Antisemitism]

According to the American Jewish Yearbook, almost eight thousand Jews emigrated from Turkey to the United States between 1899 and 1912. Alliance Israelite Universelle reports further indicate that Jews living in rural eastern Anatolia suffered severely throughout this period due primarily to Muslim Kurdish depredations (From p. 108, The Legacy of Islamic Antisemitism):

In Diyarbarkir, Urfa, Siverek, Mardin, and several other cities of this region, Kurds continuously attacked Jewish communities, forcing them to pay taxes and contributions in addition to those already exacted by the Turkish authorities. The slightest tendency to resist was immediately suppressed with blood. Jews were crushed with scorn and had to accept all sorts of humiliations. Thus, for instance, when rains were delayed in spring or late in autumn, Kurds went to Jewish graveyards, dug up newly buried corpses, cut off the heads and threw them in the river to appease Heaven’s wrath and bring on rain. In spite of the complaints of Jews to Turkish authorities, the perpetrators of such misdeeds remained, as was to be expected, undiscovered. Toward the end of the nineteenth century, the insecurity of the Kurd[ish] country was so great that Jewish peddlers could no longer venture outside the cities. The communities of the vilayet [province] of Diyarbarkir fell into misery and diminished year after year. Thus, whilst in 1874 the town of Siverek situated on the Urfa road counted about fifty Jewish families, three decades later Joseph Niego, entrusted with a mission in Asia Minor by the Jewish Colonization Association, found only twenty-six household, totaling about 100 persons. Similarly, the 500 Jews who, according to Vital Cuinet, constituted the community of Mardin toward the end of the nineteenth century, were all gone by 1906. At that time, there remained in this town only one Jew, who had the task of guarding the synagogue.