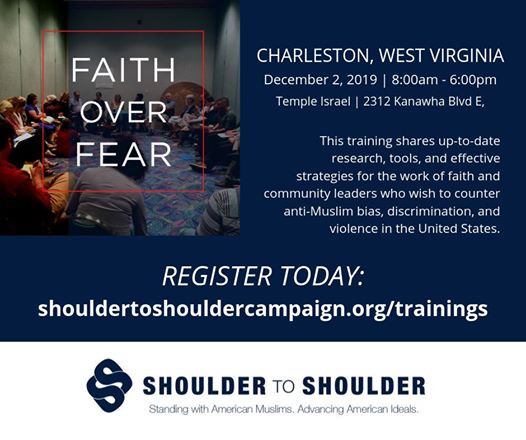 Beware:  The upcoming events scheduled in West Virginia may represent a trial run or model to be used across the nation.
This effort may be coming to your area in the near future.
THREE activities in support of the Muslim Brotherhood infiltration of America are identified below.
1) Nihad Awad, the Executive Director of CAIR/Hamas is being honored by the West Virginia chapter of the ACLU at their “Bill of Rights” Bash on November 16, 2019.
At the event, the ACLU, the self-proclaimed “nation’s defender of liberty,” with 1.2 million members and an annual budget of over $100 million annually, will demand that the promise of the Bill of Rights be extended to everyone.
In the past, the ACLU, funded by George Soros, the Ford Foundation, the Rockefeller Foundation and many other subversive radical Leftist organizations, tried to thwart the investigation of Islamic terrorist Sami Al-Arian’s role in funding the Palestinian Islamic Jihad bombings in Israel.  The organization defended convicted attorney, Lynne Stewart, when she engaged in illegal communications with her client, the Blind Sheik, Omar Abdel Rahman, and even advised Al Qaeda and Taliban combatants at GITMO to refuse to answer their military interrogators’ questions.  The ACLU continues to sabotage America’s national security.
Flyer for ACLU/Nihad Awad event in Charleston, WVA here:  Bill of Rights Bash! | ACLU West Virginia
2) The ACLU is engaged in a search for an “immigrants rights campaign coordinator” for West Virginia
The ACLU immigrants rights campaign coordinator is a “newly created, grant-funded position to educate, organize and advocate in support of immigrants’ rights in WVA.”  The individual is charged with building a coalition of community members, activists, faith leaders, business owners and service providers to help immigrants statewide and coordinate with the ACLU national office.
Link to ACLU Job Description:  https://www.acluwv.org/en/jobs/immigrants-rights-campaign-coordinator?fbclid=IwAR2bVqVKkokhw3rWsfl8cXbnylfQpYepOg-HLHG7rVYf6Skts2Q5g-oJWFg
3)  A Training Event with “Shoulder to Shoulder” – “Faith Over Fear” – is scheduled for December 2, 2019 in Charleston
“Shoulder to Shoulder” is an interfaith coalition whose members include Muslim Brotherhood affiliates such as the Islamic Society of North America (ISNA), the Arab American Institute, the Universal Muslim Association of America plus 25 national Christian and Jewish religious groups.  Their stated mission is to stand with American Muslims and uphold American values.  Shoulder to Shoulder was ostensibly founded to fight bias against Muslims.  Members work with Congress and the media to counter so-called anti-Muslim bigotry.  The organization fights legislation that seeks to preserve the Constitution and prevent the implementation of shariah in America.  Shoulder to Shoulder members worked to establish the 9/11 mosque at Ground Zero.
While Muslims in the Middle East continue to attack Israel, burn churches and oppress Christians, there is no reciprocal effort from Muslims to combat burgeoning Islamic antisemitism and the persecution of Christians.
See Article on “Shoulder to Shoulder:”  https://www.americanthinker.com/articles/2013/06/is_islam_truly_standing_shoulder_to_shoulder_with_other_religions.html
Flyer for Shoulder to Shoulder’s “Faith Over Fear” (attached above)