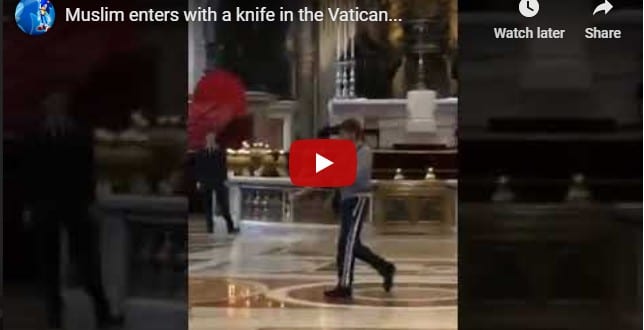 “For see, the wicked bend the bow, they set their arrow on the string to shoot from the shadows at the upright.” Psalms 11:2 (The Israel Bible™)

A young man wielding a knife threatened worshippers in the Vatican on Saturday, waving the blade and wandering for several minutes before security personnel brought the situation under control. Perhaps the most compelling aspect of the story is the near-complete media silence over an attempted terrorist attack in the heart of the Catholic Church.

Many speculated that the young swarthy man was a Muslim but since there were no reports on the incident this is impossible to confirm. The media blackout was so bizarre that speculation went far afield. A tweet was posted by one person suggesting that the attempted attack was a false flag operation intended to portray the Vatican as being at odds with Islam in order to divert attention away from possible collusion between the Pope and Islam.

One blog posted the video saying “the Pope’s contacts must have hushed this up.” Another blogger took a (hopefully) humorous perspective, writing “Man with knife threatens people at St. Peters Vatican. Pope Francis already ruled out as a suspect.”

VIDEO: Don Brown – Ukraine, the Democrats and Keeping our Eyes on the Ball