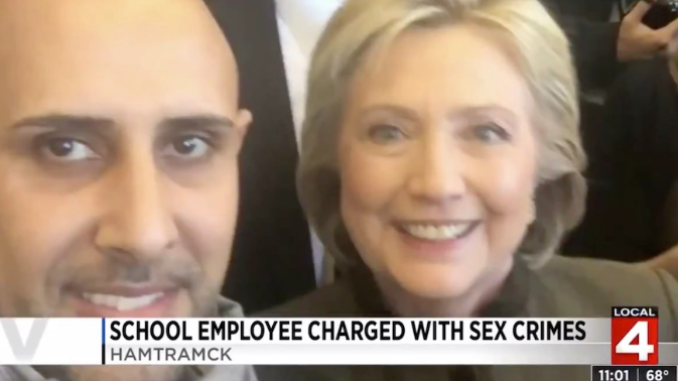 Ibrahim Aljahim, 37, is charged with two counts of criminal sexual conduct involving 18-year-old male student at a school in Hamtramck, a community in Michigan that is a virtual Muslim NO Go Zone. Aljahim is also a Democrat activist who worked for Hillary Clinton during her campaign.

Washington Standard  (h/t Marvin W) A student at a Hamtramck high school testified Thursday that a school employee who’s also a Democratic community activist who worked for Hillary Clintonhad sexually assaulted him.  Students at a Hamtramck school said they saw the employee, Ibrahim Aljahim, leave with an 18-year-old student who claims he was forced to perform an oral sex act on the employee Sept. 19.

Aljahim is facing two counts of the highest sex crimes charges. He’s accused of taking the special needs student out of school and sexually assaulting him in a car nearby.

The student spoke at a preliminary hearing in 31st District Court in Hamtramck in the case of Ibrahim Aljahim, 37, who was charged last month by the Wayne County Prosecutor’s Office with two counts of criminal sexual conduct in the first degree with an 18-year-old victim who is mentally disabled.

After the hearing, Roger Farinha, an attorney representing Aljahim, strongly disputed the allegations, telling the Free Press that Aljahim did not commit sexual misconduct and in fact was trying to help the alleged male victim, who Farinha said was previously abused by other students.

According to Farinha, some students had exposed the alleged victim’s private areas and took photos that they later circulated. Farinha said that Aljahim then reported those incidents to the school principal, Larry Cowger.

Aljahim then also reported stories that he himself was involved in a sexual act with the victim, Farinha said.