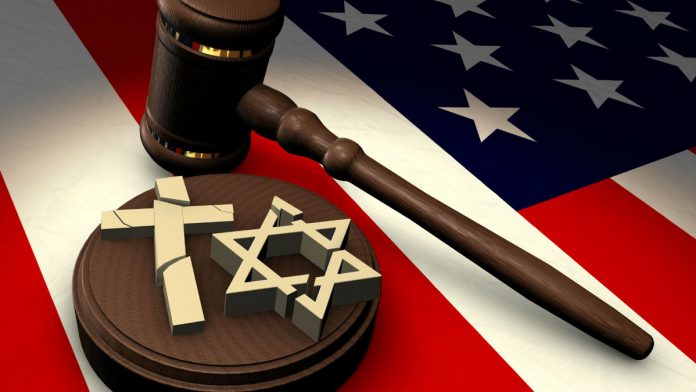 “Separation of church and state.” There may be no reference to, inference of, insinuation of, or display of religion anywhere in any government operation or public school, even if there is no coercion to participate in any Christian event or prayer. That is enshrined in every clause of the Constitution.

That is essentially what the Left has been telling us for years, and those principles have been enforced to varying degrees in many lower courts and, intermittently, even by the Supreme Court.

Now we know it was all a lie. It was a political war on the Judeo-Christian Founding of this country, not some scrupulous enforcement of a mythical “constitutional” provision based on novel legal grounds. How do we know? The same court system that has nixed Christian prayer that is completely voluntary now has no problem with mandatory Muslim prayer embedded in required coursework in government-funded schools.

Caleigh Wood was a junior at a Charles County, Maryland, public school in 2014-2015 when she was forced to complete an assignment on “The Muslim World.” One worksheet contained a fill-in-the-blank statement requiring students to write, “There is no god but Allah and Muhammad is the messenger of Allah,” a portion of an Islamic declaration of faith known as the shahada. That is a direct violation to the tenets of other religions and Caleigh Wood’s Christian faith.

In comes the Fourth Circuit earlier this year in Wood v. Arnold and suddenly expresses reluctance to interfere with state practices and stated that this did not violate Wood’s First Amendment rights. “School authorities, not the courts, are charged with the responsibility of deciding what speech is appropriate in the classroom,” wrote Judge Barbara Milano Keenan for the three-judge panel in February. “Academic freedom would not long survive in an environment in which courts micromanage school curricula and parse singular statements made by teachers.”

On October 15, the Supreme Court formally denied Wood’s petition for an appeal.

Folks, I’ve never seen such hypocrisy from the courts in my life. The Fourth Circuit is the very court that ruled that a 100-year-old WWI memorial cross – an inanimate object that can’t harm a fly – somehow violates the First Amendment, yet coercing a student to participate in Muslim declarations of faith does not. This is the same court that, in 2017, barred Rowan County, North Carolina, from opening council sessions with a prayer, similar to what our federal Congress does every day.

Remember, nobody was compelled to participate in the Christian prayer like Ms. Wood was compelled to participate in a Muslim expression of faith. The Supreme Court allowed the Fourth Circuit ruling to stand, meaning that prayer is enjoined to this very day in Rowan County. As I noted in June when the Supreme Court reversed the Fourth Circuit on the Bladensburg Cross case, some of the GOP appointees indicated that a similar cross that is newer might be a violation of the First Amendment. That was the upshot of the opinion from Alito, joined by Roberts and Kavanaugh. Only Thomas and Gorsuch categorically rejected the notion that such non-coercive expressions violate the First Amendment. The others left wiggle room. It should also be noted that only Thomas and Gorsuch would have granted the appeal in the Rowan County case. For Roberts, Alito, and Kavanaugh, this is gross hypocrisy.

Congress should not establish a religion, and enforce the legal observation of it by law, nor compel men to worship God in any manner contrary to their conscience.

The operative word here is “compel.” Yet the very same courts that believe it’s OK to compel students to participate in Muslim religious dogma have ruled that voluntary Christian prayer or the existence of monuments and symbols that are Christian or Jewish (such as the Ten Commandments) are a violation of the First Amendment.

In the Maryland case, it was the epitome of pro-Islam coercion. The shahada, which Ms. Wood was required to write as part of the history class assignment at La Plata High School, is the Islamic conversion creed, the declaration a person recites to convert to Islam and then prays and repeats during the Muslim call to prayer. Zuhdi Jasser, an enlightened Muslim scholar, was quoted by Fox News as saying, “They made this student recite the Islamic call of witness, a prayer which makes her a Muslim. That’s absurd.”

There is no record of anyone dissenting from the denial of the appeal at the Supreme Court last week. It doesn’t necessarily mean there aren’t some justices who disagree with the Fourth Circuit. We can only infer that there weren’t at least four justices willing to take up the appeal.

Clarence Thomas seems to believe that even a bona fide violation of the Establishment Clause only applies to the federal government and not state governments (Town of Greece v. Galloway (Thomas, J., partial concurrence)). However, justices like Roberts and Alito, who clearly allowed the Fourth Circuit to mess with Rowan County’s voluntary Christian prayer, have no excuse for not getting involved in this case. Even if one believes that the student wasn’t directly expressing her belief in this prayer, these same justices and lower court judges already indicated that a Christian prayer can’t be recited, even when non-Christians are not required to do anything.

Moreover, even Thomas’ view of letting states establish a religion would only go so far as permitting a state, theoretically, to favor Islam in its dogma (which is clearly happening!). But to actually coerce an individual to take an action that violates her faith would violate the Free Exercise Clause of the First Amendment. As Thomas said in his concurrence in Masterpiece Cakeshop, “States cannot put individuals to the choice of being compelled to affirm someone else’s belief or being forced to speak when they would prefer to remain silent.”

It’s true that states have more leverage to regulate the behavior and speech of students in schools than adult citizens in their homes just by the nature of education, but denying this case flies in the face of all existing precedent. This is not a matter of prohibiting lewd or offensive speech by students in class; this is actively compelling a student to participate in the ultimate religious conversion statement of another religion.

Somehow, if Muslims students were forced to write the Lord’s Prayer in public schools, I don’t think the courts would say, “Hey, let’s leave the curriculum to the teachers.” There are pending lawsuits in California against “Bring Your Bible to School Day,” which is purely voluntary.

One thing is clear about our legal system. It’s not about law and the Constitution; it’s about identity. And some identities are just more equal than others in the eyes of the elites.