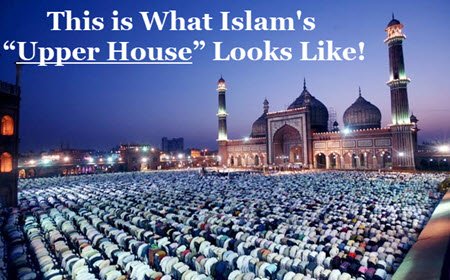 Former Muslim and Christian convert, Pastor Shahram Hadian, who was born in Iran and came to the United States as a youngster, regularly tours the country warning about jihad in America. In 2013, he founded his Truth in Love Christian Fellowship near Spokane, Washington, as a “free church,” meaning it rejected a religious tax exemption in order to spread his crucial, political message without restrictions.  That message is that our country has precipitously moved from the Dar al-Harb (lower house of Islam), or “world of war,” and is now dangerously close to the Dar al-Islam (upper house) or “world of submission.” He warns that Americans must preserve our way of life by eschewing political correctness and speaking out about this threat.

The threat arises from the obligation on every Muslim to bring all non-Muslim territory under Islamic rule.  Islamic believers declare war against a non-Muslim region which becomes enemy territory and part of the “lower house” of Islam, called the Dar al-Harb or “world of war.”  During this lower-house period, deception, taqiyya, is freely used. Islamic canonical law, shariah, a totalitarian doctrine with hudud punishments, such as stoning or amputation, is also sanitized or denied.  Muslims living in the region follow its secular laws, even though they ardently believe in the supremacy and eventual victory of shariah over all man-made laws.

Non-Muslims living under Dar al-Harb may be unaware of their plight as devout Muslims pursue their duty to declare jihad on all infidels and secure the entire world for Islam.  In the “lower house” phase, Islam is presented as a peaceful and tolerant faith.  The Koranic verses, suras, from Mohammed’s Meccan period, before he amassed power as a warlord, are emphasized as “true” Islamic beliefs.  The voiding and replacement of these verses by the later Medinan suras of violence and conquest is denied.  For example, an early sura 2:256 states, “there is no compulsion in religion,” but its replacement, sura 9:5, commands Muslims to fight unbelievers until they submit to Islam.

Muslims in the Dar al-Harb typically accentuate their victimization, calling attention to alleged “Islamophobia” and anti-Muslim bias.  Yet, attacks against Muslims are frequently revealed as self-perpetuated.  For example, Ahmed Mohamed, the Clock Boy, became an example of Islamophobia after the then-14-year-old brought to school a beeping device resembling a bomb with a timer and was questioned by police. The incident generated Twitter tweets, death threats against police and school officials, extensive media coverage and a White House visit by the student. Following multiple failed lawsuits against the school, the city and FOX news, the Mohamed family was ordered to pay court costs and subsequently moved to Qatar.

In a region under the “lower house” of Islam, resident Muslims typically declare shariah as unfit for democratic societies and applicable only to Muslim countries or communities.  They may, however, defend shariah used in a strictly Muslim context and cite religious freedom as in a stunning 2018 court verdict. In that instance, a Detroit federal judge dismissed charges against two Michigan doctors accused of genital mutilation of at least nine minor girls.  The doctors’ lawyers argued that laws against genital mutilation violate religious freedom after one doctor maintained she merely performed a religious custom.

Also, during the lower-house period, Muslims begin politically organizing, building a Muslim power base.  In 2014, the executive leadership of eight Muslim Brotherhood organizations announced formation of the United States Council of Muslim Organizations (USCMO) at the National Press Club in Washington, D.C.  The USCMO, a U.S. Muslim Brotherhood entity, is the first religion-based political party in U.S. history.  One of the founding members, Nihad Awad, is the executive director of the Council on American Islamic Relations (CAIR), an unindicted co-conspirator in the largest terrorism funding trial in U.S. history, the 2008 Holy Land Foundation trial.  His statement at the event was particularly alarming:  “This is the dream of every American Muslim, to unify the approach, agenda and vision of the Muslim community.”

U.S. political parties have never exclusively served one religious group. Yet, the USCMO endeavors to increase political participation of Muslim voters, support Muslim-friendly politicians and encourage more Muslims to run for office at all levels of government.  In 2020, an unprecedented 500 Muslims are expected to run in local, state and federal races.

In education, publicly-funded programs and textbooks promoting Islam and denigrating other faiths appear and proliferate as part of curriculums that include Muslim prayers.  Alleged and often fictional Muslim participation in history, scientific discoveries or other fields of study is emphasized to establish a false sense of Muslim supremacy.  Despite the first amendment and its non-establishment clause and the 1969 decision to remove prayer from schools, the Supreme Court recently refused to rule on a public school curriculum that promotes Islam and allows Islamic prayer in school.

During Dar al-Harb, worldwide acts of terrorism are portrayed as “un-Islamic” activities and the perpetrators as those who have “misinterpreted” Islamic doctrine.  Further, jihadist attacks, a key requirement for Muslims, are used as opportunities to advance the “Islamophobia” or “Muslims qua victims” narrative, as in the aftermath of the 2015 San Bernardino attacks.  In that instance, jihadists Tashfeen Malik and Syed Farook murdered 14 people and wounded 21 at a county holiday party.  But Muslim spokesmen expressed concern that the shooting might “embolden Trump supporters” and that Muslims would be punished for actions by bad actors not representative of bona fide Muslims.

During Dar al-Harb, interfaith activities, portrayed as attempts to reach out to other religious communities, are actually all one-way, with accommodations and compromises favoring Muslims. They serve as intelligence-gathering missions. They also seek to develop trust to soften non-Muslims for dawah efforts, the required “welcoming” to Islam, that precedes complete submission required by the “upper house” period.

When Pastor Hadian warns of our descent into the upper house, he is describing the obliteration of our constitutional republic and all the protections and freedoms it guarantees.  He is talking about the near future that will soon see the impact of significant increases in the Islamic population and their efforts to transform America.  Hadian sees the targeting of “right-wing extremists” and white supremacy as attempts to keep Americans in the dark about the Islamist Trojan horse. These tactics are effectively designed to make it more difficult to expose the truth about the Koranic-mandated war to overtake the non-Muslim world.

Indeed, according to Hadian, current practices validate his premise that the U.S. is transitioning to a period of shariah promotion, a definitive characteristic of the “upper house.”  Noteworthy are the shariah patrols with look-alike NYPD vehicles that regulate neighborhood behavior in Brooklyn, as well as an increasing number of spontaneous, New York City street closings for Islamic prayer that inconvenience non-Muslims.  An ear-piercing, five-times-daily call to prayer occurs in Hamtramck, Michigan.  Workplaces have seen increased demands for special accommodations exclusively for Muslims, like prayer breaks and prayer facilities, and halal products in school cafeterias and in the general food supply.  The political elite, especially Democrats, now accept radical anti-Semitic positions from two Muslim Brotherhood-affiliated members of the so-called “Squad” – Ilhan Omar and Rashida Tlaib – and are unwilling to censure them or investigate Omar’s alleged illegal activities.

All this points to undeniable progress toward the American Muslim community securing the  “upper house” in the United States and makes Pastor Hadian’s warning even more serious.  Once the Dar al-Islam is firmly in place, it will be too late to wage an effective defense to preserve our way of life.