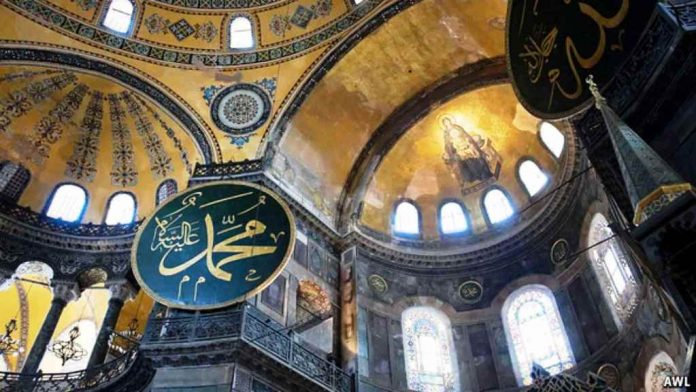 Turkey’s little remarked on but ongoing mistreatment of historic churches is increasingly reflective of that nation’s growing sense of Islamic supremacism.

Before the Turks invaded it, Anatolia (present day Turkey) was an ancient Christian region; a large chunk of St. Paul’s epistles were sent to or dealt with its churches, including the seven of the Apocalypse.  With the Turks’ conquest, colonization, and subsequent Turkification of Anatolia—hence why it’s now simply called “Turkey”—tens of thousands of churches were systematically desecrated and turned into victory mosques.

Under Mustafa Kemal Atatürk’s (d. 1938) secularization program, some of the most historic and significant of these churches-turned-mosques were transformed into neutral museums.  Today, however, they are again under assault, again being transformed into Islamic victory mosques.

Most recently, on November 5, the government announced that a fifteen-hundred-year-old church, dedicated to the Holy Savior, is to be transformed into a mosque again, though it had been a museum since 1945.  This means that, although it is considered “one of the most splendid examples of Byzantine art, and still preserves mosaics and frescoes,” these will all be destroyed in the cleansing process to make it a mosque.

The Holy Savior is hardly the first church/museum to be transformed into a mosque in recent years. This ongoing phenomenon is a not so veiled threat for the ultimate and much anticipated transformation—that of the Hagia Sophia, Eastern Christendom’s greatest basilica located in Constantinople (modern Istanbul).  Although it too has been a museum since the mid-1930s; although it holds an especial place for millions of Eastern Orthodox Christians; and although there are more than 3,000 active mosques in Istanbul alone—more than 97 percent of Turks surveyed in 2013 said they want to see Hagia Sophia turned into a mosque.

Why so many Turks are clamoring for this transformation—that is, to manifest their Islamic sense of supremacism over Christianity (and, ergo, over the West, as their thinking goes)—is apparent in all segments of society, top to bottom.  Consider President Recep Tayyip Erdoğan, who earlier this year made clear that he too means to see Hagia Sophia transformed into a mosque.  After reporting that “Turkey’s president has recited an Islamic prayer in the Hagia Sophia, a historic Istanbul landmark that has become a symbol of interfaith and diplomatic tensions,” AP added that Erdoğan also dedicated his prayer to the “souls of all who left us this work as inheritance, especially Istanbul’s conqueror [Sultan Mehmet II].”

Salih Turhan, head of the Anatolian Youth Association, which annually demonstrates around Hagia Sophia, also explained : “As the grandchildren of Mehmet the Conqueror, seeking the re-opening Hagia Sophia as a mosque is our legitimate right.”

In other words, the desire to transform Hagia Sophia into an active mosque is not due to piety or a dearth of mosques, but rather about reveling in the glory—that is, gory—days of jihad, and honor its practitioners.

In what follows, we revisit exactly what Mehmet II, the Conqueror, did to and in Hagia Sophia to prompt so many modern Turks, including their president, to honor him, including by calling for the building’s transformation into a mosque. (All quotes in the following narrative are from primary sources, mostly eyewitnesses, and are documented in Sword and Scimitar: Fourteen Centuries of War between Islam and the West).

After Constantinople had parried centuries of jihadi thrusts, Mehmet—that is, Muhammad (Mehmet is how Turks pronounce the Arabian prophet’s name)—sacked Constantinople on May 29, 1453.  Once inside the city, “The enraged Turkish soldiers . . . gave no quarter,” wrote an eyewitness:

When they had massacred and there was no longer any resistance, they were intent on pillage and roamed through the town stealing, disrobing, pillaging, killing, raping, taking captive men, women, children, old men, young men, monks, priests, people of all sorts and conditions…  There were virgins who awoke from troubled sleep to find those brigands standing over them with bloody hands and faces full of abject fury…  [The Turks] dragged them, tore them, forced them, dishonored them, raped them at the cross-roads and made them submit to the most terrible outrages… Tender children were brutally snatched from their mothers’ breasts and girls were pitilessly given up to strange and horrible unions, and a thousand other terrible things happened. . .

Because thousands of citizens had fled to and were holed up in Hagia Sophia, it offered an excellent harvest of slaves—once its doors were axed down.  “One Turk would look for the captive who seemed the wealthiest, a second would prefer a pretty face among the nuns. . . . Each rapacious Turk was eager to lead his captive to a safe place, and then return to secure a second and a third prize. . . . Then long chains of captives could be seen leaving the church and its shrines, being herded along like cattle or flocks of sheep.”

The slavers sometimes fought each other to the death over “any well-formed girl,” even as many of the latter “preferred to cast themselves into the wells and drown rather than fall into the hands of the Turks.”

Having taken possession of one of Christendom’s greatest and oldest basilicas—nearly a thousand years old at the time of its capture—the invaders “engaged in every kind of vileness within it, making of it a public brothel.” On “its holy altars” they enacted “perversions with our women, virgins, and children,” including “the Grand Duke’s daughter who was quite beautiful.” She was forced to “lie on the great altar of Hagia Sophia with a crucifix under her head and then raped.”

Next “they paraded the [Hagia Sophia’s main] Crucifix in mocking procession through their camp, beating drums before it, crucifying the Christ again with spitting and blasphemies and curses. They placed a Turkish cap . . . upon His head, and jeeringly cried, ‘Behold the god of the Christians!’”

Many other churches in the ancient city suffered the same fate. “The crosses which had been placed on the roofs or the walls of churches were torn down and trampled.” The Eucharist was hurled to the ground; holy icons were stripped of gold, “thrown to the ground and kicked.” Bibles were stripped of their gold or silver illuminations before being burned. “Icons were without exception given to the flames.” Patriarchal vestments were placed on the haunches of dogs; priestly garments were placed on horses.

“Everywhere there was misfortune, everyone was touched by pain” when Sultan Mehmet finally made his grand entry into the city. “There were lamentations and weeping in every house, screaming in the crossroads, and sorrow in all churches; the groaning of grown men and the shrieking of women accompanied looting, enslavement, separation, and rape.”

The sultan rode to Hagia Sophia, dismounted, and went in, “marveling at the sight” of the grand basilica. After having it cleansed of its crosses, statues, and icons—the sultan himself knocked over and trampled on its altar—Mehmet ordered a muezzin to ascend the pulpit and sound “their detestable prayers. Then this son of iniquity [Mehmet], this forerunner of Antichrist, mounted upon the Holy Table to utter forth his own prayers,” thereby “turning the Great Church into a heathen shrine for his god and his Mahomet.”

This, then, is what Turkey’s Muslims and president are proud of: the violent conquest of ancient Christian territory, and the atrocity-laden transformation of its greatest cathedral into a mosque; this is what they are eager to honor by turning Hagia Sophia into a mosque again.   For make no mistake: if the average Westerner is clueless concerning the aforementioned history, every Turk is taught it in youth.

Openly idolizing Mehmet and trying to do what he did—transform Hagia Sophia into a mosque to honor the “souls of all who left us this work as inheritance, especially Istanbul’s conqueror,” as Erdoğan proclaimed—is tantamount to Turks’ saying, “We are proud of [and seek to emulate?] our ancestors who slaughtered, enslaved, and raped people and stole their lands simply because they were Christian infidels.”

Note: For a comprehensive account of the siege and subsequent rapine of Constantinople, see Chapter 7 of author’s Sword and Scimitar.