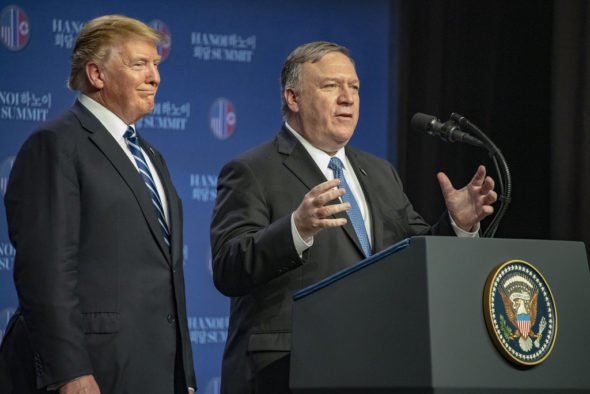 “I don’t want to comment on that,” President Trump said. “The answer’s ‘no’.”

And with those words, the President of the United States dismissed a golden opportunity to offer even a word of encouragement to the courageous Iranian people who have stood up to an enemy regime to demand their freedom.

Trump was at the White House the morning of December 3, sharing a joint press conference with French Prime Minister Emmanuel Macron, when a question came from a reporter about whether the US supports the demonstrators in the streets across Iran.

The President declined to take a stand. Abandoning his administration’s “New Iran Strategy” of 2018, Trump joined his predecessors back to Jimmy Carter who failed to implement any policy meaningful enough to actually threaten the Islamic Republic rulers who threaten and kill their own people and the entire region.

Trump added to the confusion later in the day by tweeting the opposite of what he had just told journalists: “The United States of America supports the brave people of Iran who are protesting for their FREEDOM. We have under the Trump Administration, and always will!”

The administration’s official policy of “maximum pressure” has proven just enough to infuriate the mullahs’ regime without actually threatening its continued grip on power.

Emboldened by the lack of a forcible US response to years of sponsorship of IED attacks on American and Coalition troops in Afghanistan and Iraq, repeated attacks against commercial shipping in the Persian Gulf and Strait of Hormuz, the seizure of commercial vessels and holding crews hostage, the downing of a US drone, and attacks against the Saudi oil infrastructure launched from Iraq, Yemen, and finally Iran itself, that regime has formed a perception of the U.S. government as unwilling to take it on.

Whether accurate or not, it is perceptions that drive behavior for both allies and adversaries. The latest threat came from Islamic Revolutionary Guard Corps (IRGC) General Alahnoor Noorollah in a November 29 speech in which he openly menaced US military bases in the Middle East, saying that Iran’s missiles are aimed at 21 of them.

American sanctions imposed following the May 2018 decision to withdraw from the Iran nuclear deal indeed have caused widespread economic hardship—not on the mullahs, but on the Iranian people. This helps explain why so many Iranians poured into the streets across the country following an abrupt mid-November 2019 cut in subsidies on gasoline at the pump, which caused prices to jump at least 50% for the average impoverished Iranian family.

As the world watched (and did nothing), Iranians quickly moved from slogans about the economy and endemic corruption to demands for an end to the Velayat-e Faqih system of clerical domination in the Islamic Republic. Protesters filled the streets in at least 107 cities and all 31 Iranian provinces, calling for “Death to the Dictator” (the Supreme Leader of Iran, the Ayatollah Ali Khamenei) and even “Death to Rouhani” (the Iranian president).

The Iranian people again show a total rejection of the regime’s “Death to America” line. But the sentiment wasn’t reciprocated.

Secretary of State Mike Pompeo shot out a couple of empty “the United States is with you” tweets, but apart from that, the protesters were left to the brutality of the regime’s thugs in the IRGC, Bassij, and assorted Shi’ite terror militias. Some, like the Hashd-e Shaabi, had been imported from Iraq for the purpose. Others included elements of the Afghan Fatemiyoun Division of the Qods Force.

The regime understood that the US administration would do nothing to stand in the way of their massacre. The Iranian people in the streets understood it, too. Iranian security forces repeatedly opened live fire on unarmed protesters, often at point-blank range. Hundreds were killed, at least 2,000 injured, and some 7,000 detained.

To spare the West of ugly images that would cause it to change its non-interference policies, Iran shut down its Internet, across the entire country, for the better part of two weeks.

Only now, in the aftermath of the worst of the violence, has part of the Iranian Internet been brought back up; a flood of videos, taken by ordinary Iranian citizens, has come surging out, but, as the regime planned, too late to do any good.

The scope of the killing and destruction in cities across Iran is staggering. Protesters, desperate and frustrated, wreaked substantial damage, too: banks, gas stations, government offices, security force bases, and other symbols and instruments of the hated regime were attacked and burned.

In the end, none of it mattered: the Tehran regime remains firmly in power, its support for Islamic terror groups like HAMAS, Hizballah, the Houthis, Iraq’s Hashd’e Shaabi, Afghanistan’s Fatemiyoun and the Taliban unaffected, and its all-out drive for deliverable nuclear weapons, if anything, accelerated.

The one challenge that may be a harbinger of things to come is the popular uprisings against Tehran’s domination over satraps in Baghdad and Beirut. Current—and in Iraq, ongoing—protests are being ruthlessly crushed, under the direction of Qods Force commander, MG Qassem Suleimani.

But rising levels of discontent among a generation born well after the Iranian revolution of 1979 will not dissipate. And it’s not just about economic poverty or even anger at endemic regime corruption that are blamed for it. At least since the current waves of protests in Iran began in late December 2017, the fury has been directed at the very underpinnings of the Islamic Republic: the Velayat-e Faqih system itself, that is dominated by an unelected clergy-headed regime that enforces strict obedience to Islamic Law (shariah) on a population increasingly rebellious against all of it.

Similar sentiments are driving popular uprisings in both Iraq and Lebanon. Ever-larger segments of all three populations resent the distribution of government largesse based on nepotism, personal connections, regime loyalty, and unfair sectarian proportionality. In Iraq, the protests broke out, unexpectedly, in southern Iraq, in the Shi’ite strongholds of Baghdad, Basra, Nasiriyah, and south.

Demonstrators shut down bridges, streets, and even the critical oil export port of Umm Qasr for a time. Their anger was aimed directly at the Iranian regime that interferes in their countries: Iraqi protesters even burned the Iranian consulate in Najaf on November 28.

That’s when Suleimani stepped in and Iraqi security forces used live fire to break up the demonstrations. The death toll in Iraq has surpassed 400 and even with the resignation of Prime Minister Adel Abdul al-Mahdi, protests continue.

Similarly, it would have been unthinkable in Lebanon in even the recent past, but anti-government protesters there were yelling “Terrorists, terrorists, Hizballah are terrorists” and “Here is Lebanon, not Iran.” In other words, they know who runs the country: it is Hizballah, on behalf of its masters in Tehran. Significantly, many of these protesters were from Hizballah-dominated poor Shi’ite areas, like the Dahiya neighborhood of southern Beirut. The Lebanese government collapsed, Prime Minister Saad Hariri resigned (again), but thus far, brute force has prevailed. The late November 2019 release of $105 million in U.S. military assistance to the Lebanese Armed Forces only ensures that the iron grip of Iran and Hizballah over that country will continue.

Whatever Secretary Pompeo’s hopes for a change in the Tehran regime’s ”malign behavior” might be, he must realize that no amount of cajoling, demands, or sanctions will induce behavior that essentially would result in a loss of power for it or its satellite regimes. Relinquishing any measure of power to the people of Iran, Iraq, or Lebanon would lead only to more demands for genuine reform and a truly representative system, instead of one based on Islam, regime loyalty, and sectarian identity.

Even were the mullahs and their Velayat-e Faqih system somehow to be overthrown, that would still leave the guns and economic might of the IRGC, Qods Force, Bassij, and other intelligence and security forces in charge. That is what must be confronted—preferably before they acquire the ability to deploy deliverable nuclear weapons.