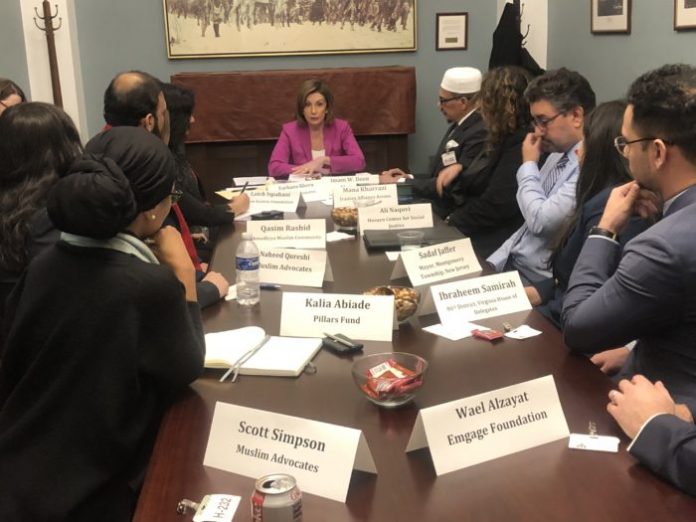 This article originally appeared at The Federalist under the title, “Pelosi Meets with Islamist Groups About Overturning “Muslim Ban”, Impeaching Trump” House Speaker Nancy Pelosi took time out during the House’s ongoing impeachment effort to meet with a group of Muslim activists. The activists were seeking support for legislation to oppose the president’s executive order […]

This article originally appeared at The Federalist under the title, “Pelosi Meets with Islamist Groups About Overturning “Muslim Ban”, Impeaching Trump”

House Speaker Nancy Pelosi took time out during the House’s ongoing impeachment effort to meet with a group of Muslim activists. The activists were seeking support for legislation to oppose the president’s executive order 13780, banning travel from countries of national security concern. Critics insist on identifying the executive order as a “Muslim ban” despite that it affects only seven countries, two of which—North Korea and Venezuela—are not Muslim. The executive order was upheld by the Supreme Court in a 5-4 ruling.

Pelosi attended a meeting on December 10 organized by Muslim Advocates, which led lawsuits against the travel ban. The group is known for opposing even the most reasonable counter-terrorism efforts, and played a key role in undermining Customs and Border patrol efforts to screen for radical Islamists during the Obama administration.

Pelosi met with a number of Muslim organizers and politicians from around the country, with both Sunni and Shia groups represented. A representative of the Open Society Foundation was also present, according to pictures of the meeting provided by Muslim Advocates.

The meeting was organized to encourage Pelosi to support H.R. 2214, the so-called No Ban Act, introduced by Rep. Judy Chu (D-Calif), which seeks to prevent the president from enforcing the travel ban and seeks to extend other limitations on the president’s authority to restrict immigration for national security reasons. Chu has a history of close ties to Islamist lobby groups. The bill currently has 205 co-sponsors, all Democrats.

Among the participants was Virginia state Del. Ibraheem Samirah, an anti-Israel boycott, divestment, and sanctions activist who won election to the Virginia House of Delegates despite a controversy over a history of antisemitic remarks made on social media, and ties to known Hamas fundraisers. Samirah drew national attention after he was physically removed from President Trump’s speech at the celebration of the 400th anniversary of Jamestown after loudly disrupting the speech while displaying a sign that read “Reunite my family.”

Other participants included the CEO of Emgage Foundation, a Muslim Voters activation group founded by former Council on American Islamic Relations (CAIR) leader Khurrim Wahid. Wahid, an outspoken supporter of convicted Palestinian Islamic Jihad organizer Sami Al-Arian, was himself on a terrorism watch list, and served as a lawyer for a number of convicted terrorists. Emgage specializes in backing Muslim candidates running for office. It took credit for helping Samirah win in Northern Virginia, and for helping Democrats “Sweep in Virginia Elections,” according to an Emgage press release.

For at least one participant the meeting was about more than showing the importance of Muslims as an electoral force. On social media, Shia Muslim activist Mohammad Ali Naquvi for the Husayn Center for Social Justice described the meeting with Pelosi as explicitly linked to House Democrat’s impeachment effort.

Naquvi wrote: “Strategically, pushing this new legislation while impeachment proceedings are going on provides another reminder (in terms of optics), why Trump needs to be impeached, so hopefully that will be enough impetus for Pelosi to put her weight behind it.”

Naquvi’s views seems to be shared by at least some Democratic proponents of impeachment, notably Rep. Al Green, who cited the travel ban in his proposed articles of impeachment and in an op-ed for The Hill back in July.

In addition to discussing the travel ban, the group spoke to Pelosi about perceived “anti-Muslim bigotry.” After the meeting, participant Qasim Rashid said, “We had the opportunity to speak with Speaker Pelosi and discuss the anti-Muslim violence we’re seeing through social media accounts.”

Rashid clearly has adopted the progressive tendency to conflate speech with violence.  Interestingly, Rashid does not indicate that he used the opportunity with Pelosi to address inter-Muslim violence and hate speech. Rashid is an Ahmadiyya Muslim, a minority sect that often faces threats of violence and discrimination from Islamist groups, even in the United States.

Pressuring social media companies to engage in censorship has long been part of Muslim Advocates’ agenda. In early November, Muslim Advocates Executive Director Farhana Khera met with Facebook CEO Mark Zuckerberg about the issue, and later celebrated the banning of figures like Laura Loomer and Alex Jones from the platform. The group routinely blames Trump’s social media for anti-Muslim sentiment.

The meeting between Pelosi and the Muslim Advocates-led group represents yet more evidence of the alignment of Islamists as full members of a leftist political resistance to Trump which views him as a fundamentally illegitimate president. Despite having won at the Supreme Court, the administration’s travel ban is treated as de facto evidence for impeachment, and every presidential tweet as a coded message to white supremacists.

Domestic Islamists position themselves as implacable foes of the president and all his policies, but there’s been little evidence that the Trump administration has reciprocated. Having so far declined to fulfill an early campaign promise to establish a Commission on Radical Islam, instead the administration continues to fund and meet with Islamist groups who are overt opponents of such a commission.

The meeting with Pelosi suggests that while the Trump administration may be confused about how committed America’s leading Muslim organizations are to his political defeat, the Democratic leadership has no illusions about whose side the Islamists are on.