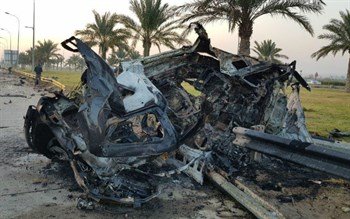 Experts on national security are sharing their insights following a U.S. drone attack that killed the head of Iran’s elite Quds Force, resulting in threats from the Ayatollah Ali Khamenei of Iran that a “harsh retaliation is waiting” for the United States.

President Donald Trump and his team of advisers orchestrated the targeting killing of General Qassem Soleimani early on Friday. The general was the head of Iran’s elite Quds Force, which was designated a Foreign Terrorist Organization (FTO) on April 15, 2019.

Phil Haney is a founding member of the U.S. Department of Homeland Security. He suggests “there must be some pretty awesome intel on the ground in and around Baghdad.” He suspects that the Israel Defense Forces (IDF) could have had some involvement.

“Clearly, someone was following Soleimani’s communications – a Farsi-speaking ally, perhaps,” he suggests, adding that “the next step – the next chess move – will take place in a couple arenas away from Iran itself.”

OneNewsNow spoke to Clare Lopez, vice president of research and analysis for the Center for Security Policy. She expects that after a three-day period of mourning in the Middle East country, the United States might actually experience retaliation – and “Iran has a lot of options,” she states.

“[Iran] has proxy terror forces all over the region of the Middle East,” she warns, noting that the region is home to many U.S. military bases and diplomatic facilities that “have been explicitly targeted – or at least threatened – by the Iranian regime in the past.”

The U.S. military, diplomats, and her allies are on high alert across the Middle East, Lopez notes – “and we need to be mindful that Hezbollah has many operational cells inside the United States,” she points out.

Above image shows the wreckage of an American drone strike that killed Iranian Gen. Qassem Soleimani in Baghdad.