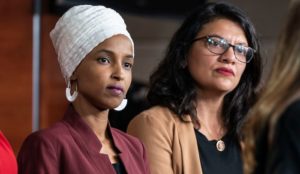 It’s more than just about having three Muslims in Congress. I think symbolically it has great value, but I won’t rest until 2020 we have five more members of Congress; 2022 and 24, we have ten more Muslims in Congress. In 2030 we may have about 30, 35 Muslims in Congress.  Then we’re talking about Madame Chair Rashida. We’re talking about Madame Chair Ilhan. Hell, we could be saying Speaker of the House Ilhan, Speaker of the House Rashida, Senator Rashida, Governor Ilhan, President Fatima, Vice President Aziza, Inshah’ Allah…Each and every one of us has a directive to represent Islam, in all of our imperfections, but to represent Islam and let the world know that Muslims are here to stay, and Muslims are a part of America. And we will, we will have a Muslim caucus that is sizable, that is formidable, and that is there for you.

People in public office at the local, state, and federal levels are required to take an oath of office that requires them to swear, or affirm, to support the U.S. Constitution. This is based on Article 6, Clause 3 of that Constitution (the “Oaths Clause”):

The Senators and Representatives [in Congress] before mentioned, and the Members of the several State Legislatures, and all executive and judicial Officers, both of the United States and of the several States, shall be bound by Oath or Affirmation, to support this Constitution…

This constitutional requirement is binding upon every government official in the United States from state governors and judges to members of city councils, police officers, firefighters or board members of mosquito abatement districts and library boards.[1]

The 2019 elections saw an increase in the number of Muslims re-elected and newly elected to public office across the United States, and as part of their oaths of office they each swear to support the U.S. Constitution. However, as I showed in my latest book Islamic Doctrine versus the U.S. Constitution: The Dilemma for Muslim Public Officials,[2] there are many core tenets of Islam that are in direct conflict with much of that Constitution.

So I decided to put that to the test. In Chapters 10 and 11 of my latest book I provided a number of questions that could be asked of a Muslim public official and that require that official to choose between the Constitution and Islamic Doctrine. I put four of those questions into an e-mail and individually sent that e-mail to eighty Muslim public officials across the United States.

We shall first look at the four questions I used and then examine the variety of responses I received. I then list the Muslim public officials, by State, who did not respond to what, considering their oath of office, should have been simple questions to answer. This is followed by my concluding remarks.

On December 9th and December 16th of 2019 I sent the following e-mail to eighty Muslim public officials across the United States who were either incumbents or who had been newly elected to office in the November 5th elections:

I am interested in your response, as an elected public official who follows the religion of Islam, to the following questions:

No. 4:  According to the words of Allah found in Koran 4:3, Muslim men are allowed, but not required, to be married to up to four wives. Being married to more than one wife in the United States is illegal according to our man-made bigamy laws. Do you agree with Allah that it is legal for a Muslim man in the United States to be married to more than one woman, or do you believe that our man-made laws prohibiting bigamy are true laws and are to be followed instead of this 7th Century command of Allah?

I look forward to your responses.

Support for the U.S. Constitution

Only six Muslim public officials responded by specifically saying that they supported the U.S. Constitution. I emailed each of them and asked if each would be comfortable in being publicly identified in an article I would be writing. Three did not reply and one asked not to be identified, so I have not identified those four. The two that had no problem in being identified for their support of the U.S. Constitution were:

I received various replies from seven other Muslim public officials:

Ilhan Omar – U.S. House of Representatives (MN-5): On December 16th I sent the e-mail to three different e-mail addresses I had for Omar. That same day I received a form response from Connor McNutt, Omar’s Chief of Staff, stating that he was out of the office but would be returning that day. On December 20th I received a form e-mail from Omar that started out:

As your Congresswoman, I do not only want to represent Minnesotans, I want to govern with you…

Omar never responded to the questions I had sent her.

Rashida Tlaib – U.S. House of Representatives (MI-13): On December 16th I received a form response from Tlaib acknowledging receipt of my e-mail.  I have received nothing further from Tlaib.

As an elected official I support uphold [sic] and defend the laws of this nation state and city [sic] where I reside. Islam is completely compatible with the American laws. As president of the local branch of the NAACP and a member of the state Executive committee of the NAACP I support and speak for social justice civil rights and equality for all citizens [sic]. As President of Bridge of Faith an Interfaith group I try to being [sic] understanding of various faiths.

The next day I sent this response to Shabazz:

I have not heard back from Shabazz.

The Inquisition ended in 1834

I replied that same day:

There is no “inquisition” involved. These should be very simple questions to answer because I believe your oath of office included a statement that you would support our U.S. Constitution and laws. Why do you hesitate to support the 1st and 8th Amendments to our Constitution, and our bigamy laws?

Where are you located again? I have taking [sic] that oath three times, It [sic] never says I should answer to bigots who live outside my jurisdiction, I hope your week is going well.

I replied that same day by pointing out that there was nothing bigoted about asking how he resolved fundamental conflicts between doctrines of his faith and the U.S. Constitution, and I asked why he was reluctant to answer.

I don’t think I have to answer you, for one basic reason there is a separation between faith and politics in America. Unless you have another question that is directly connected to my role as an elected official in Portland Maine. [sic] I will not answer any of your racist anti-Muslim questions.

On December 12th I thanked him for his input. Later that same day he responded:

that is what I thought [sic]

I had not further exchanges with Ali.

Please pardon my delayed response, it is neither deliberate nor intentional. Thank you for this timely and necessary discourse. Please feel free to reach out to me at your convenience, I will be happy to answer any questions you my [sic] have.

I replied that same day by pointing out that I looked forward to his responses to the four questions I had sent him. I have not heard back from Brent.

Robert Jackson – State Senate of New York: On December 16th I received a form response from Jackson confirming receipt of my e-mail and stating:

We will review your email and do our best to provide feedback on the matter.

On December 17th I received the same form response again. I have not heard back from Jackson.

These Muslim public officials did not reply:

Ali Saleh – Mayor of the City of Bell

Sara Sadat – Lisle Board of Trustees

Mohamed T. Khairullah – Mayor of the City of Prospect Park

Denise Sanders – Teaneck Board of Education

The fact that 93% of the Muslim public officials that I contacted would not express support for the U.S. Constitution is concerning and lends increased significance to the remarks of Congressman Andre Carson mentioned at the beginning of this article:

Each and every one of us has a directive to represent Islam, in all of our imperfections, but to represent Islam and let the world know that Muslims are here to stay, and Muslims are a part of America. And we will, we will have a Muslim caucus that is sizable, that is formidable, and that is there for you.

It would appear that 93% of the Muslim public officials I contacted give more credence to that directive than to their oath of office.

It is time to start publicly asking Muslim public officials to make a choice between the U.S. Constitution and Islamic Doctrine.

[1] David Shestokas, The US Constitution and Local Government, January 7, 2014, http://www.shestokas.com/constitution-educational-series/the-us-constitution-and-local-government/.

[3] However, according to Islamic Doctrine a Muslim can break an oath with minimal cost, or even negate the oath at the time it is being made. A Muslim can also make an oath but at the same time mean something completely different.  For eye-opening details about this, see Islamic Doctrine versus the U.S. Constitution: The Dilemma for Muslim Public Officials, pp. 13-33.