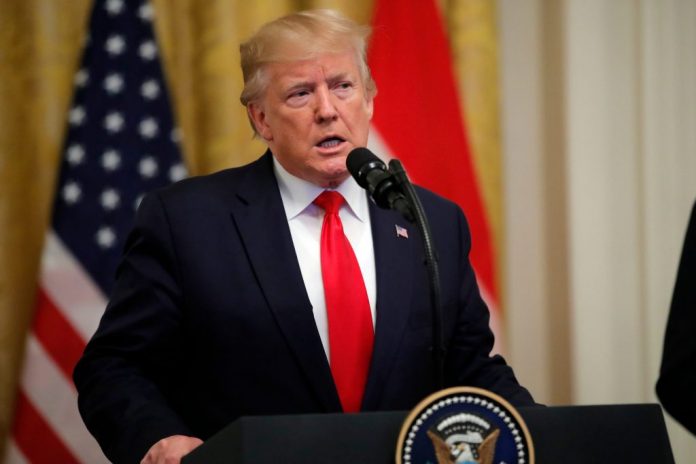 In the wake of President Trump’s decision to eliminate by missile the American-killing Iranian terrorist, General Qasem Soleimani, word now comes that Nancy Pelosi and reactionary democrats are proposing a resolution in Congress to “limit the president’s power” to act against Iran. Perhaps they think that such a resolution, if passed, would bind the president, either legally, constitutionally, or morally, from employing the U.S. military to protect Americans.

If that’s what they think, they can think again.

Congress can pass all the resolutions it wants. But congressional democrats have a problem. And that problem is the separation of powers doctrine in the U.S. Constitution.

First, under our constitutional separation-of-powers, Article 1 Section 8, grants only Congress power to declare war. And yes, only Congress has that power.

Congress has declared war 11 times in American history, against 10 different nations. These declarations were followed by the massive infusion of land, naval and air forces, for the purpose of destroying an enemy nation.

But there is a difference between declaring war, or even waging war, versus limited military strikes, far short of war, designed to defend American lives. Anyone who thinks that a president can only order military action with Congressional approval doesn’t understand the Constitution.

In one role, only Congress may act, to declare war if circumstances so justify a declaration. In the other role, in using the military to protect Americans, the president may act alone, per constitutional mandate, even without Congressional approval under Article II of the Constitution, which makes the President, not Congress, Commander in Chief of the United States military.

Under Article II, Section 2, the “Commander in Chief” clause, the president may clearly give commands to his military, and also to state militias when called into federal service.

A legitimate presidential command to a soldier, might be “pull the trigger.” That’s what military commanders do. They give military commands. And a president is the military’s commander in chief. Another legitimate command might be, “initiate a drone strike against a terrorist who has killed over 500 Americans and plans to kill more Americans.”

Take, for example, the beginning of Barbary Pirates Wars, when in 1801, Thomas Jefferson sent American naval vessels to the Mediterranean to protect U.S. shipping against looting and threats to American mariners by pirate raiders from North Africa.

Congress never declared war against the Barbary states, and did not authorize broad military force until 1802, after the American schooner Enterprise, without congressional approval, had first attacked and defeated the Tripolitan corsair Tripoli in August of 1801 – to deter attacks against Americans.

In 1957, President Dwight Eisenhower, under his constitutional authority as Commander in Chief, without congressional approval, federalized the entire Arkansas National Guard to protect Americans when integrating Arkansas public schools. Eisenhower also dispatched part of the 101st Airborne Division to Arkansas to reinforce the National Guard.

In 1975, President Gerald Ford, under his constitutional authority as Commander in Chief, without congressional approval, sent U.S. Marines to recapture the American ship SS Mayaguez, with instruction to use deadly force to recapture the ship and find and rescue its crew, if possible.

In 1980, President Jimmy Carter, under his constitutional authority as Commander in Chief, without congressional approval, sent U.S. Delta Forces to Iran, in an unsuccessful attempt to free, by military force, 52 Americans being held hostage in the U.S. Embassy.

In 1983, President Ronald Reagan, under his constitutional authority as Commander in Chief, without congressional approval, ordered United States forces into Grenada to protect American medical students threatened by a communist coup on the island.

In 1986, President Ronald Reagan, again under his constitutional authority as Commander in Chief, without congressional approval, ordered devastating airstrikes against Libya in retaliation for a disco bombing in West Berlin, tied to Libya, which killed two Americans and wounded 79 others. U.S. jets there struck directly against Gaddafi’s compound, and even killed a member of his family.

In 1993, President Bill Clinton, under his constitutional authority as Commander in Chief, without congressional approval, ordered limited missile strikes against Iraq in retaliation for an assassination plot against President George H.W. Bush.

Presidents in none of these cases sought advance congressional approval, nor were they either legally or constitutionally required to even consult with the Congress beforehand, because of their Constitutional powers under Article II as commander in chief of the U.S. military.

If under circumstances like this, a president decides that certain members of the congress can’t keep their mouths shut, with American lives on the line, he is justified in refraining from congressional briefings beforehand that might compromise security and American life. In this case, Trump was justified not to brief congress in advance. Briefing Dan Bishop or Ralph Norman? No doubt safe doing that. But can you imagine how foolish, for example, Trump would have been had he briefed AOC in advance? Or Rashida Talib? Or Bernie Sanders or Nancy Peolosi?

Soleimani, by injecting sophisticated IEDs into the Iraq war, had already killed more Americans (at least 500 U.S. soldiers) than had died in any historical case of presidential intervention cited above. By the way, the U.S. did not invade Iran, or strike Iran militarily. But Soleimani took it upon himself to engage in American-killing, nonetheless.

And in addition to attacking an American drone, killing an American contractor, injuring American soldiers in the rocket attack that killed the contractor, and setting fire to an American embassy, now Reuters reports that Soleimani, in October, instructed his top ally in Iraq, Abu Mahdi al-Muhandis, and other Shia militia leaders, to step up attacks against American targets in Iraq “using sophisticated new weapons provided by Iran.”

And the democrats and foolish press members wonder, aloud, if the threat was “imminent?”

When a mastermind terrorist gives an order to kill Americans, how much more “imminent” do the democrats want before Trump acts? More flesh and blood of Americans? Is that “imminent” enough?

Trump acted well within his constitutional authority, in this case, to take out an American-hating terrorist with gallons of American blood dripping from his hands and imminent plans to kill more Americans.

In this case, as democrats Joe Lieberman and as former Obama Homeland Security Secretary Jeh Johnson have opined, the President did the right thing.

Iran has apparently retaliated by firing missiles into the Iraqi sand, and thus, boasted to their populace that they have struck back. Fine. In other words, a face-saving fireworks show, and not much else.

If they really strike back, and mess with Americans, Trump should strike even harder. Let’s hope it doesn’t come to that.

Don Brown, a former U.S. Navy JAG officer, is the author of the book “TRAVESTY OF JUSTICE: The Shocking Prosecution of Lieutenant Clint Lorance.” He is one of four former JAG officers serving on the Lorance legal team.(Lt. Lorance was pardoned by President Trump on November 15, 2019.) Don has also served at the Pentagon, in the United States Attorney’s Office, and has studied International Law at the U.S. Naval War College. He is the author of 14 books about the U.S. military, including the 2015 military exposé CALL SIGN EXTORTION 17: The Shootdown of Seal Team Six.