The liberal mainstream media (MSM) report that our nation is now divided more than any other time in American history, insinuating President Trump is the cause of it. But the President is not the culprit here; it is the Left’s radical departure from traditional American ideals that is to blame.

It was President Obama who stoked racism and class warfare the entire time he was in office, simultaneously shoving a radical leftist agenda on people that wanted no part of it. So, any reports claiming President Trump is responsible for dividing this nation is not just fake news, it’s a lie.

In fact, the Left has gone to great lengths to ensure that we remain divided. Why? Because a united people are harder to subdue. Divide and conquer is more than a well-known cliché, it’s a military strategy whereby wars have been fought and won utilizing it. And now the Left is employing it in their war against the Right. They sow discord and hate, convincing naïve and gullible people that they are victims of some kind. They harp on any and all societal differences as if any distinction is unfair or unjust. They inject poisonous rhetoric into political and public discourse, instigating violence against others. Recall how Maxine Waters openly urged intimidation and violence against Trump officials.

All dissention, rioting and violent behavior the nation has experienced since the 2016 election has come from the Left, instigated by a cabal of powerful extremists within MSM, the democrat congress, academia, the nation ’s top security agencies, and global-minded elitists who have organized and now support leftist groups across the nation aimed at sabotaging Trump.

We’re all familiar with the Left’s unrelenting attacks against the President since his election. First, they accused him of being in cahoots with the Russians, then they created unwarranted angst over a phone conversation he had with the newly elected Ukrainian president, and from that they squeezed out two fake charges that the democrats used to impeach him— which had been their goal since his election. In the meantime, they’ve wasted valuable legislative time and millions of taxpayer dollars on investigations and high-priced, biased, investigative attorneys.

Make no mistake, the Left has every intention of succeeding in their attempts to remove President Trump from office, no matter what it takes. Such unwarranted aggression aimed at removing a duly elected President…the leader of a sovereign nation …goes beyond political dissent; it meets the Constitution ’s definition of treason. The seriousness of this situation calls for charging those within the evil cabal with sedition.

It makes no sense that the Left seeks to destroy someone who so proudly uplifts American values and works to make the nation the best it can be. Unless, of course, they reject those values and have no desire to keep America strong. If that’s the case, then they hate President Trump for the very reasons his supporters love him, and it stands to reason that they hate his supporters, too.

It seems that the Left’s ‘progressivism’ has inoculated them against any sense of American patriotism. They recoil like Dracula to a cross to anything suggestive of traditional American principles and values. They have become irrational, mean-spirited, and divisive.

This being an election year, we will be deluged with campaign ads of politicians making promises and running on issues that they may or may not follow through with. No surprise there. But you can be assured that the philosophy of the party that wins the presidency will be what determines which direction the nation goes. Here’s what’s at stake: 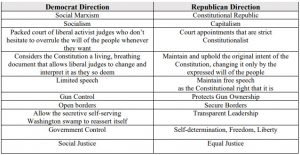 Ideological differences have always existed between the two parties, but the chart above shows how dangerously far the Left has gone. They are now aimed in the opposite direction of all that America has stood for since its founding —which is one reason their aggressive attacks against the President are so alarming. We’ve seen how unscrupulous they are by the evil tactics they ’ve employed against him. Everything they ’ve done has been ‘highly unprecedented’. If they should somehow succeed in removing him from office, there is nothing about their unprincipled behavior that suggests they intend on stopping there. Perhaps their seditious behavior is really aimed at hijacking the nation for themselves.

The Left is clearly out of step with America and the Constitution…not the Right. Liberty-minded, freedom-loving people will naturally be at odds with any radical plan to change America into something the Founders never intended.

If the Left is so radically discontent with America as it is, why stay? There are plenty of socialist nations whose governments they would find far more to their liking. Why not choose a suitable one and go live there?

Those of us on the Right don’t have such options. America is our last best hope.