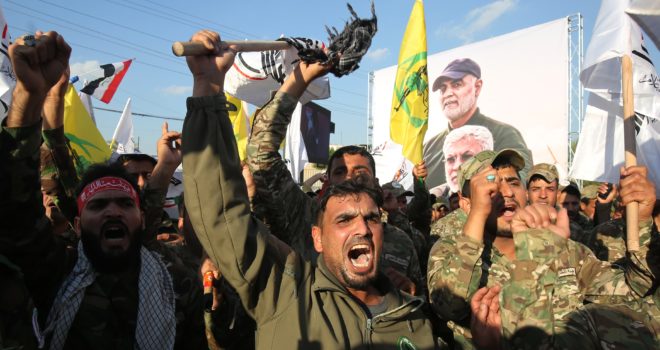 The Trump administration’s decision to kill Iranian general Qasem Soleimani eliminated a longtime opponent of American interests in the Middle East, but also raised questions about how the strike integrates with the United States’ support for religious minorities in the volatile region.

President Donald Trump, Vice President Mike Pence, and Secretary of State Mike Pompeo have prioritized support for Iraq’s religious minorities as part of the administration’s foreign policy. Since 2002, approximately one million Christians have left Iraq, most of them having lived in the northern Nineveh Plains region. In response to ISIS’s genocide of Christians, the administration signed into law the Iraq and Syria Genocide Relief and Accountability Act in 2018 to help humanitarian aid efforts.

But progress has been uneven.

The U.S. has given around $400 million to rebuild northern Iraqi communities belonging to religious minorities, yet almost a million people remain displaced. Late last year, an official with the U.S. Agency for International Development called U.S. efforts only modestly successful.

The main problem is security. In response to ISIS’s rise, militia units consisting mostly of Shia Muslims known as Popular Mobilization Forces emerged. Despite ISIS’s weakening, these groups continue to operate in the Nineveh Plains and other parts of Iraq, mostly unchecked by the Iraqi government and often with the support of Iran. The U.S. has sanctioned some militia leaders, including Rayan al-Kildani and Waad Qado, for human rights violations. These two men have inhibited Christians from returning to the towns of Batnaya and Bartella.

Christians have responded by trying to secure themselves, with a mostly Christian military organization known as the Nineveh Plain Protection Units providing protection for some communities. Reine Hanna, an advocate for northern Iraq’s religious minorities, told a U.S. government commission earlier this year that more Christians are returning to towns secured by the Nineveh Plain Protection Units than to towns not secured by Christians.

Nevertheless, the Iranian-backed Shiite militias remain a persistent threat, and this is where Soleimani comes into play.

Prior to his death, Soleimani commanded the Quds Force, an arm of Iran’s military that oversees proxy militias and terrorist organizations set up to support Iranian interests abroad. According to the State Department, Soleimani was likely responsible for at least 17 percent of American deaths in Iraq between 2003 and 2011.

The Trump administration finally decided Soleimani’s time was up last week, killing him in a drone strike as he left Baghdad’s airport.

Also killed in the strike was the man Soleimani was meeting: Abu Mahdi al-Muhandis, deputy commander of the Popular Mobilization Forces—the same militias impeding Christians trying to return to their homes in northern Iraq.

Their deaths came on the heels of a tumultuous week involving U.S. forces and one of the militias, known as Kata’ib Hezbollah. On December 27, a rocket attack by the militia in northern Iraq killed an American contractor and wounded four soldiers. The U.S. responded with air strikes on facilities used by Kata’ib Hezbollah two days later, which resulted in dozens of fighters being killed or wounded. On New Year’s Eve, supporters of Kata’ib Hezbollah and other Iranian-backed militias surrounded the U.S. Embassy in Baghdad, setting some buildings on fire.

The Defense Department’s announcement of General Soleimani’s death noted his involvement in the incident at the embassy and added that he was “actively developing plans to attack American diplomats and service members in Iraq and throughout the region.” It also linked him to the December 27 rocket attack.

The death of a senior leader in the Popular Mobilization Forces, and the Iranian general who supported him, is not necessarily of benefit to Iraq’s religious minorities.

While it is unclear how Iran will respond to the strike, educated speculation suggests countermeasures could include cyberattacks, assaults on oil infrastructure in the Middle East, or mobilizing proxy groups loyal to the Iranian regime.

Already, the U.S. has turned its attention away from fighting ISIS to strengthening its bases in Iraq and elsewhere in the region. Moreover, there are increasingly loud calls in Iraq itself for U.S. troops to leave the country. As American forces are increasingly preoccupied with Iran, northern Iraq’s religious minorities are at risk of an ISIS resurgence or efforts by Popular Mobilization militias to assert more power in the country.

The bottom line is that instability and uncertainty leave Christian communities vulnerable. Fear of a war between the U.S. and Iran with Iraq as the battlefield will deter Christians thinking about returning home.

My colleague Peter Burns, director of policy at the nonprofit In Defense of Christians, told Catholic News Agency that instability would lead to an “increased probability of counterattacks on religious minorities.” He also observed that “Soleimani and his Quds Force wreaked havoc on Christians and others in Iraq, Iran, Lebanon, and Syria for decades.”

The deaths of Soleimani and al-Muhandis struck at the heart of two forces that have threatened Iraq’s Christians. But their demise does not mean Christians are safe. On the contrary, for the Trump administration to ensure its support for religious freedom in Iraq is not in vain, it must incorporate protection for the country’s religious minorities into its plans to mitigate Iranian retaliation.