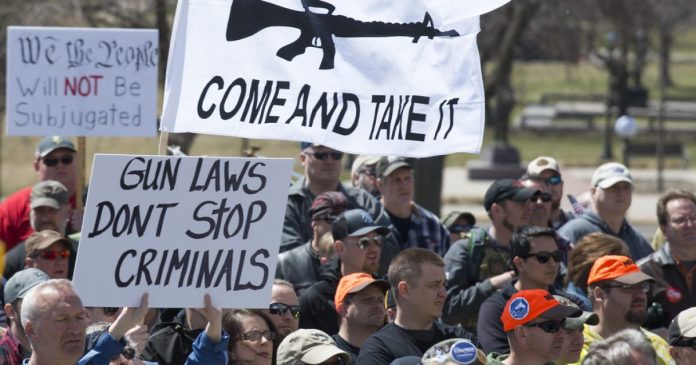 Although the 2nd Amendment sanctuary movement did not begin in the state of Virginia, the incredible grassroots resistance to Governor Blackface Northam’s draconian gun control attempts has caused the movement to spread like wildfire across the country.

Several counties in Kentucky are pushing resolutions to create 2nd Amendment sanctuaries within their jurisdictions. Their efforts are being buoyed by newly-elected Democrat Governor Andy Beshear’s public support of unconstitutional red flag laws.

“We don’t feel like that law-abiding citizens should be infringed upon. They have this right as guaranteed by the Constitution of this country,” said Judge-Executive Dan Mosley of Harlan County, where a pro-2nd Amendment resolution was passed unanimously.

The movement is also building in North Carolina. One county was forced to move their meeting about the issue to a bigger venue just to accommodate all of the people who showed up to support the sanctuary resolution.

“A 2nd Amendment sanctuary refers to a county’s commitment not to impede a citizen’s rights as granted to them by the constitution and the Bill of Rights that many have fought and died for,” said Donnie Holden, who is leading the charge in Macon County. The counties of McDowell and Davidson have already passed resolutions.

In Michigan, the movement has grown exponentially as evidenced by the “Michigan for 2A Sanctuary Counties” Facebook group. In about three weeks, the group has gained 80,000 members, and there is a resolution drive in virtually every county throughout the state. The movement has gained support from state legislators and candidates running for Congress.

“Every county is a Second Amendment sanctuary county. The county sheriff has the right to defend and uphold the constitution of the state of Michigan and Article 1, Section 6 says everybody has the right to bear arms,” state representative Beau LaFave said.

“The Second Amendment is still extremely popular, and the Democrats are in for a real rude awakening if they think they’re going to weaken it,” said congressional candidate Thomas Norton, who is hoping to unseat Justin Amash in the 3rd district.

Norton will be a keynote speaker at a large rally outside of the Michigan state Capitol on Monday, Jan. 20. Patriots in Michigan will be issuing a show of solidarity with the people of Virginia, who are rallying in the midst of unprecedented pushback from the governor.

“On January 20th, we will be a keynote speaker at the Michigan solidarity event in Lansing, supporting our fellow American patriots and their fight to protect the 2nd Amendment in Virginia,” Norton told Big League Politics.

The petty tyrant Gov. Coonman may have done a favor to American patriots with his futile attempted power grab. The constitutional resistance within the Right has not had this much momentum since the heyday of the tea party movement.