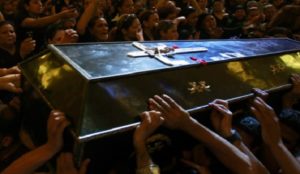 “Islamic extremism is a primary driver of Christian persecution in eight out of the ten most dangerous places for Christians to live, Open Doors revealed Wednesday in its World Watch List 2020.”

This is nothing new. The suffering endured by Christians because of Islamic supremacist bigotry and hate is unfathomable to most Westerners. Jihad Watch has referred to Open Door USA stats about Islamic persecution of Christians for years, as has reported extensively on the genocide being committed against them in Africa and the Middle East that is mostly ignored by the mainstream media while even fake accusations of “Islamophobia” are plastered on front pages. Fake anti-Muslim hate crimes have become an epidemic, while the media ignores the routine slaughter of Christian families and other minority populations by jihadists.

To be politically correct, most media consistently refer to “radical Islam” as the culprit, but what they consider radical Islam is normative Islam. These countries are among the top 20 states where “Islamic oppression” is listed by Open Doors as being the source of Christian persecution (in order of severity): Afghanistan, Somalia, Libya, Pakistan, Eritrea, Sudan, Yemen, Iran, Syria, Nigeria, Saudi Arabia, Maldives, Iraq, Egypt, Algeria, Uzbekistan, Myanmar and Laos.

These countries are not “radical” Islamic states. They are members of the Organization of Islamic Cooperation, which is closely aligned with the United Nations. Despite the evidence about the role of normative Islam in the persecution of and intolerance toward minorities, Islam is still being pushed as a religion of peace. Such thinking justifies open-door immigration, enabling Islamic supremacist attitudes to be imported into Western countries.

Islamic extremism is a primary driver of Christian persecution in eight out of the ten most dangerous places for Christians to live, Open Doors revealed Wednesday in its World Watch List 2020.

In Somalia, for instance, number three on the list of the 50 countries where Christians face the most serious persecution, the violent Islamist group, al-Shabaab “has repeatedly expressed its desire to eradicate Christians from the country,” Open Doors noted.

Some 99 percent of Somali citizens are Muslims, and being exposed as a convert to Christianity results in life-threatening peril, “often leading to on-the-spot execution,” the report observed. “As a result, most Somali Christians keep their faith completely secret.”

The situation has only gotten worse over recent years, the report stated, and Christians in Somalia are so vulnerable to attacks by Islamic militants that “in the interests of security,” Open Doors decided not to publish specific examples of persecution for fear of inciting further violence.

In Libya, on the other hand, various Islamic militant groups have gained control over parts of the country and “Libyan converts to Christianity face abuse and violence for their decision to follow Christ,” Open Doors said.

“Christians are at risk all over the country, but especially vulnerable in areas where radical Islamic groups are present,” the report states. “ISIS still maintains a presence in the wider region around Sirte. Other groups, like those connected to the Islamic Dawn coalition control areas around Tripoli and some parts of Tripoli itself. In the East, radical groups are at least present in Benghazi.”

In the fifth worst country for Christians, the Islamic Republic of Pakistan, Christians live under the constant threat of mob attacks, Open Doors revealed.

As a tiny minority of the heavily Muslim population, all Christians “suffer from institutionalized discrimination, illustrated by the fact that occupations seen as low, dirty and derogatory are reserved for religious minorities like Christians by the authorities,” the report said.

Even the few Christians belonging to the middle class are not exempted “from being marginalized or persecuted in an Islamic culture,” the report said, and “believers are always at risk because of the country’s notorious blasphemy laws.”

Christian women often suffer most, being “targeted for both their faith and their gender,” Open Doors said. “An estimated 700 girls and women abducted each year are raped and then forcefully married to Muslim men in the community, usually resulting in forced conversions.”….