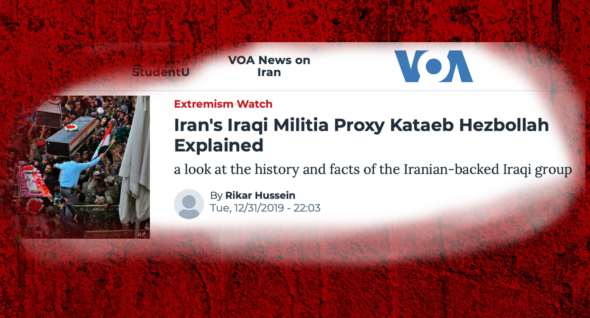 The Voice of America asked the Center for Security Policy’s Clare Lopez for insights immediately after the Iranian-backed attack that killed a US civilian contractor in Iraq, but before President Trump retaliated.

“Clare Lopez, a former CIA career operations officer and an analyst at the Center for Security Policy, said that by responding to the attack in Kirkuk, the US wanted to convey to Iran and its proxies that it is willing to respond should its interests be targeted in the region,” the Voice of America reported on December 31.

“The Iraqi people know that Washington has always supported Baghdad’s government and provided with them the security and military aid they asked for,” Lopez told VOA. “The US strikes on Kataeb Hezbollah should not be construed as a violation of the Iraqi people’s rights or an insult to them, but as a proper response to Iran’s bullying via its proxies in Iraq.”