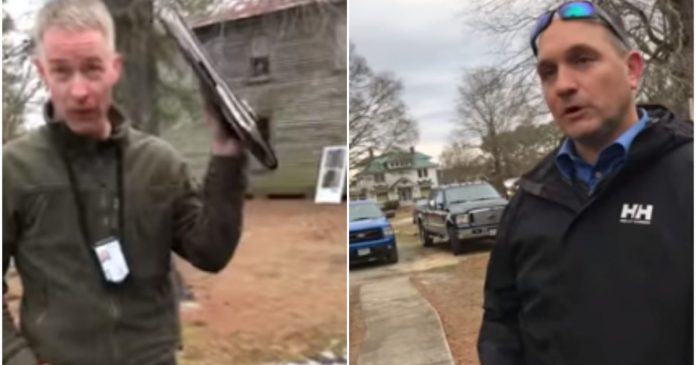 The tyranny in Virginia out of control.

A patriot who plans to attend tomorrow’s gun rights rally in Virginia was stalked and harassed by law enforcement at his own home in Pennsylvania on Saturday morning.

The patriot, identified by his wife as George Wagner, became a person of interest to the armed thugs after he visited the Virginia Capitol to gauge the situation as it was unfolding. His wife posted the video on her Facebook account.

“The two officers had their hand on their weapons when my husband stepped out the door to greet them,” she added.

Wagner had a tense encounter with law enforcement, and he did not take kindly to their show of intimidation against him.

“I am a citizen of the United States, and I understand that we have an unconstitutional 2nd Amendment a**hole governor who is taking away our rights,” the patriot explained to the thugs who showed up at his door.

“So the reason that we are here is we got a tip that somebody was coming down to the Capitol, and there was video footage of you at the Capitol walking around the Capitol which appeared to be checking into structures… and just getting a general surrounding of the Capitol and seeing what’s going on,” the armed thug explained.

The patriot laughed in his face, and defended his position. They implied he was a violent threat because he knocked on pillars near the Capitol.

He explained: “I walked the Capitol as a free citizen and a free man because I am going to attend the rally and because I wanted for my safety to know the surroundings. You two are a fine representative of what’s going on right now. You have driven over 100 miles to harass a citizen on his front porch in north Northumberland County based on a tip, which is exactly why the red laws are so bad, these red flag laws.”

The thugs accused the patriot of conducting “pre-operational planning,” which implies that the constitutional patriot is an ISIS-style terrorist. They confirmed that he was being watched and profiled by law enforcement as he traveled about the Capitol.

“What they saw was an intelligent American citizen who is situationally aware of the piss poor job that y’all will do with my security. You are disarming me. You are putting me behind a gate, and yet still as a free man I am going to come stand. Do you know what’s in my backpack? My backpack will have first aid supplies… so I can help my fellow citizens when you b*stards start spraying us,” he said.

“You are the problem!” he exclaimed at the thugs.

The entire video can be seen here:

“No weapons will be allowed on Capitol grounds,” Northam said last week as he made the announcement. “Everything from sticks and bats to chains and projectiles…. The list also includes firearms. It makes no sense to ban every other weapon but allow firearms when intelligence shows that armed militia groups plan to storm the Capitol.”

Law enforcement has been told that white supremacists, neo-Nazis and anti-government militias are planning to besiege the Capitol tomorrow, and they are apparently buying the propaganda hook, line and sinker.