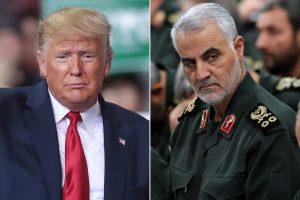 Both narratives reject reality as the basis for foreign policy decision-making in favor of delusion. Over the past two months, President Donald Trump has rejected and disavowed them both. His opponents are apoplectic.

As far as Iran is concerned, as journalist Lee Smith explained in Tablet online magazine this week, when Iranian “students” seized the US Embassy in Tehran in November 1979 and held 52 Americans hostage for 444 days, they placed the Carter administration in a dilemma: If President Jimmy Carter acknowledged that the “students” weren’t students, but soldiers of Iran’s dictator Ayatollah Khomeini, the US would be compelled to fight back. And Carter and his advisers didn’t want to do that.

So rather than admit the truth, Carter accepted the absurd fiction spun by the regime that Khomeini was an innocent bystander who, try as he might, couldn’t get a bunch of “students” in central Tehran to free the hostages.

At the base of their decision to prefer fantasy to reality in regards to Iran was the hope that Khomeini and his “students” would be satisfied with a pound or two of American flesh and wouldn’t cause Washington too many other problems.

So too, as Smith noted, the Carter administration was propelled by guilt. The worldviews of many members of the administration had been shaped on radical university campuses in the 1960s. They agreed with the Iranian revolutionaries who cursed Americans as imperialists. They perceived Khomeini and his followers as “authentic” Third World actors who were giving the Americans their comeuppance.

Khomeini and his “Death to America” shouting followers got the message. They understood that Washington had given them a green light to attack Americans in moderate and, as Smith put it, “plausibly deniable” doses. it. For the next 40 years, Iran maintained its aggression against America. And from Ronald Reagan to Barack Obama, every president since Carter accepted and kept faith with Carter’s decision not to hold the Iranian regime responsible for the acts of aggression and war it carried out against America through proxies.

During the Iraq War from 2003-2011, Iran’s aggression reached new heights. Iran organized the Shiite militias that waged war against the US forces in Iraq. It also supported Al-Qaida in Iraq which organized in Iran and used Iran as its logistical base for operations.

More than six hundred American forces were killed and thousands were wounded in attacks carried out with Iranian-made improvised explosive devices, (IADs). Yet rather than confront Iran for its aggression and take action against it, the Bush administration tried to make a deal with the mullahs.

Under Obama, reaching an accord with Iran was the singular goal of US foreign policy. Every other goal was subordinated to Obama’s burning desire to appease Iran at the expense of Israel and the US’s Sunni Arab allies.

This then brings us to President Trump. Trump’s decision to kill Qassem Soleimani – who as commander of the Iranian Revolutionary Guards Corps’ Quds Force was the head of all of Iran’s regional and global terror apparatuses – destroyed the Carter administration’s Iran narrative.

Soleimani was killed in Baghdad along with Abu Mahdi al-Muhandis, the commander of one of the Soleimani-controlled Shiite militias in Iraq. Iraqi protesters, who have been demonstrating against Iran’s control over their government since last October claim that Soleimani was the one who ordered al-Muhandis to kill the demonstrators. More than 500 demonstrators have been killed by those forces in Iraq over the past three months.

By killing the two together, the Americans exposed the big lie at the root of 40 years of American deliberate blindness to the reality of Iranian culpability and responsibility for the acts of terror and aggression its surrogates have carried out against America and its allies.

By killing Soleimani, Trump made clear that the blank check for aggression the previous six presidents gave Tehran is now canceled. From now on, the regime will be held responsible for its actions. From now on US policy towards Iran will be based on reality and not on escapism.

The second false narrative that has formed the basis of US Middle East policy since Carter is that Israel and the so-called “occupation” are responsible for the absence of peace in the Middle East. Moved largely by Carter’s hostility towards the Jewish state, his administration was the first to call Israel’s control over Judea and Samaria an “occupation.” It determined, through a 1978 memo authored by Herbert Hansell, the State Department’s legal adviser, that the mere existence of Israeli communities in Judea and Samaria constituted a breach of international law.

Because the Hansell memo was based on a wholly specious interpretation of the Fourth Geneva Convention from 1949, and had no basis in actual international law, the Reagan administration refused to adopt it. But that didn’t stop Ronald Reagan from adopting the anti-Israel substance of Carter’s policy narrative. Just as Reagan turned a blind eye to Iran’s responsibility for the terror attacks its proxies carried out against the United States – including the bombing of the US Embassy in Beirut in April 1983, and the bombing of the Marine barracks in Beirut in November 1983 – so he substantively accepted Carter’s anti-Israel narrative which blamed Israel for the absence of Middle East peace. Reagan appointed veteran diplomat Philip Habib to serve as his special envoy for Middle East peace. Habib put together a “peace plan” predicated on the notion of Israeli guilt.

The fact that the Carter narrative was self-evidently ridiculous and destabilizing made no impression on these successive administrations. PLO aggression and refusal to either disavow terrorism or accept Israel’s right to exist in any borders were brushed aside as irrelevant and unwelcome information.

Israel’s profound concessions for peace were pocketed, poo-pooed and forgotten.

Last November, the Trump administration put paid the phony narrative of Israeli avarice with Secretary of State Mike Pompeo’s announcement that the administration was disavowing the Hansell memo and replacing it with an accurate international law-based assessment that Israeli communities in Judea and Samaria are not inherently illegal.

Wednesday, while the world was awaiting Trump’s response to Iran’s failed missile attack against Iraqi bases housing US forces, the Kohelet Policy Forum held a conference on the legal and diplomatic significance of Pompeo’s announcement. In a pre-recorded message for the conference, Pompeo briefly explained why he decided to disavow the Hansell memo. His explanation could be equally applied to the Trump administration’s policy towards Iran.

In Pompeo’s words, “It is important that we speak the truth when the facts lead us to it. And that’s what we’ve done.”

For the American foreign policy establishment, Trump’s refusal to continue their forty-year marriage of policy to delusion is an unforgivable transgression, and a threat. Not only has he committed the crime of rejecting their collective “wisdom,” his reality-based policies might actually be working. The threat to them is obvious.

If Trump’s reality-based policies succeed, he will dismantle their foreign policy legacy. All their protestations of wisdom, all their fancy resumes and titles as former senior officials will lose their allure and market value.

Since Pompeo’s statement regarding the Israeli communities in Judea and Samaria related to an issue which, while critical, is less in the headlines today than it was under Obama, aside from a few peremptory condemnations, the foreign policy aristocrats ignored it. As they saw it, once they return to power and start working with an Israeli government led by someone other than Benjamin Netanyahu, the anti-Israel phony narrative will be restored to its rightful place as the foundation of US policy.

The Iran story is different. Days before the drone strike that killed him, Soleimani tried to re-enact the 1979 “student” takeover of the US Embassy in Tehran with “protesters” in Baghdad. But this time it didn’t work. And Soleimani paid with his life for his failure. Iran’s half-hearted, failed missile attack against US forces in Iraq showed that the Iranian regime is terrified of Trump and their reversal of fortune.

Trump’s policies expose the mendacity and rank insanity of his predecessors’ policies towards Iran and Israel. Since Obama’s policies were particularly radical, divorced from reality and devastating, Trump has reasonably singled them out for particular rebuke and condemnation. Among other things, Trump rightly said the missiles Iran shot at US forces in Iraq were paid for by the 150 billion dollars in sanctions relief and 1.8 billion dollars in cash that flowed to the coffers of the IRGC through the 2015 nuclear agreement.

Rather than keep quiet as their signature policy was exposed as a strategic disaster, Obama administration officials and their supporters in Congress and the media went into very public paroxysms of rage. Ben Rhodes, Obama’s deputy national security adviser and chief propagandist, who sold the nuclear deal to a credulous and eager media, said Trump’s move would lead to war. House Speaker Nancy Pelosi said that the US strike against Soleimani was “disproportionate,” hinting it was a war crime to kill the terrorist who had just ordered the seizure of a US Embassy. She scheduled a Congressional session to curb Trump’s power to confront Iranian aggression and nuclear proliferation.

On cue, a group of psychiatrists wrote an open letter to Congress insisting that Trump is crazy and must be restrained. (The same group has written several nearly identical letters since Trump took office.)

To protect and preserve their 40-year old delusion-based policy, Trump’s domestic opponents are effectively supporting the Iranian regime against the United States. And as they see it, they have no choice. They are in a race against time. The more successful Trump’s reality-based policies towards Iran on the one hand and Israel on the other are, the harder it will be for the foreign policy establishment to restore their delusion-based policies when he leaves power. Given the stakes, we can assume that their attempts to clip Trump’s wings and debase him will increase in intensity, churlishness and irrationality as time goes by and as his successes mount.