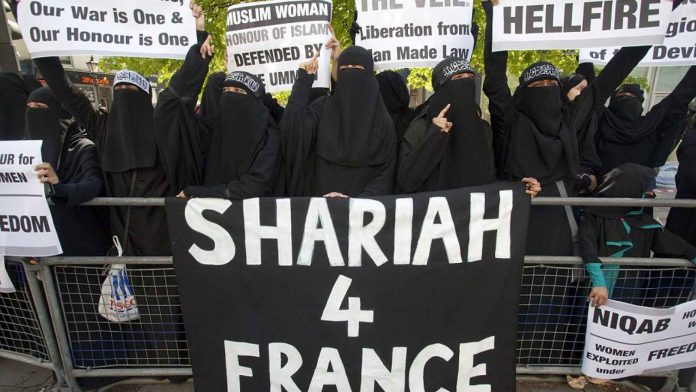 The wall of silence is cracking.

Five years ago, Mayor Anne Hidalgo, the socialist boss of Paris, threatened to sue FOX News for reporting on the existence of no-go zones: territories in France under Islamist control.

There was no lawsuit, but FOX News issued repeated apologies, with hosts “correcting” experts like Steve Emerson and Jessie Jane Duff who actually knew what they were talking about.

The media had mocked Emerson and Geller as Americans who didn’t know anything about France.

But the wall of silence on no-go zones has been coming down. And it is indeed a wall of silence. The existence of a classified report by the General Directorate for Internal Security (DGSI) identifying 150 areas in France under Islamist control has leaked. That leak comes just as the DGSI busted 7 Muslims for plotting a terrorist attack. The perpetrators were just another of the 400,000 on the Fiche S watch list.

These 150 neighborhoods that are held by Islamists not only overlap many of the territories that had been previously listed as no-go zones, but point to a problem that has is expanding across France. Beyond the suburbs of Paris, Lyon and Marseille, the report identifies areas of concern in Maubeuge, Roubaix, Denain, Haute-Savoie, Annemasse, Bourg-en-Bresse, Bourgoin-Jallieu, and Nogent-le-Rotrou.

Why did a report listing the existence of 150 no-go zones have to be classified? The inciting incident behind the secret report was a mass stabbing by a Muslim terrorist in early January. While the media insisted, once again, that the terrorist, who had shouted, “Allahu Akbar”, was suffering from mental illness, behind the scenes the wheels had begun to turn leading to the creation of the secret report.

Despite the cloak of secrecy, there isn’t likely to be anything new in the report for anyone in France.

Bernard Rougier’s The Conquered Territories of Islamism is making waves with its rigorously researched examination of Islamist takeovers of working-class areas. Rougier, an academic expert on Islam, combines blunt rhetoric, “Islamism is a machine to destroy France”, with careful analysis and fieldwork. The most provocative sections document the intersections of the red-green alliance, the collaboration of Communists with Islamists, that covertly built up the political influence of Islamists.

While France with its laïcité secularism is resistant to religious political parties, leftist political parties have acted as front groups for Islamists, securing power and privileges for them under a red flag.

The core of Rougier’s thesis is that Islamism is Communism’s heir both territorially and politically.

A methodical work documenting Islamist takeovers that was written by a director of the Center for Arab and Oriental Studies in the university of a major American city would be inconceivable. As is Rougier’s focus on mosques as a focal point for the transformation of entire areas from secular to Islamist. But France is inescapably falling into a desperate state of war with its growing Islamist population.

In 2015, after the American and French media had gotten through mocking the existence of no-go zones, the French government declared a state of emergency and put soldiers on the street. Two years later, while the media was attacking Geller, the state of emergency was still underway.

While officially the state of emergency ended that year, in practice it became a permanent measure. French cops are now able to carry out raids without a warrant, stop-and-frisk anyone across entire areas, put suspected terrorists under house arrest and shut down mosques. Soldiers can still be deployed in major cities and the state of emergency is now an ordinary feature of life.

But somehow the idea of no-go zones was ridiculous even while soldiers patrolled the streets.

The General Directorate for Internal Security doesn’t use the term no-go zones. Instead its report describes the emergence of “microterritoires” or microterritories. These “microterritoires” controlled by Salafists emerge in improbable zones. One example listed is Nogent-le-Rotrou, the medieval agricultural town with a sizable military presence, which would be a potentially devastating Islamist target.

The French military, like armies everywhere, was in need of recruits from poor neighborhoods with few prospects. And it found them in some of the same banlieues that the Islamists find their recruits, and didn’t ask too many questions, or often any questions at all. The secularism that pervades much of French society is all but absent in the military. Some Muslim soldiers have refused to fight Muslim terrorists in places like Afghanistan for religious reasons. They’re far more likely to reject orders.

Islamists setting up shop near a military base would be a perfect opportunity for recruiting the troops. France’s permanent state of emergency uses the military, but it may already be fatally flawed.

The worries are understandable and so is the secrecy. Successive governments have gotten the country deeper into trouble and waited for the next government to act because the situation was already too bad. The DGSI report is just the latest in a list of classified reports on how bad things really are.

Unlike most of those reports, this one leaked even though it was for the Interior Minister’s eyes only.

While the authorities lie to the people, the paper trail shows that they know what’s going on. It’s not a case of ignorance, but of cowardice. Socialist parties depend on Muslim votes. Everyone else knows that they don’t have an answer and discussing a problem without an answer is political suicide. The efforts to enforce secularism through burka bans isn’t enough. Integration has become an outdated cliché.

President Emmanuel Macron has described the problem as communitarianism. “Political Islam wants to secede from our republic,” he warned. “We are talking about people who, in the name of a religion, pursue a political project.”

Islam is a political project. It’s communitarian only in its embryonic stages. French Islamists don’t seek separatism, but totalitarianism. Their goal is not to secede from the republic, but to eliminate it.

The DGSI report was meant to provide the Interior Minister with data for yet another set of proposals for battling sectarianism by defining the problem as narrowly as possible while concealing its scope from the general public. The leaking of the broad conclusions of the report, the 150 Islamist territories, makes that impossible. It also makes it untenable to deny the existence of Islamist no-go zones in France.

But the media won’t stop denying their existence or libeling those who tell the truth as Islamophobes.

Future media fact checks will focus on the semantic differences between no-go zones and the microterritories held by Islamists of the DGSI report. Or, more likely, they will ignore the report.

And Rougier’s work explains why. While the DGSI report documents the scope of the problem, The Conquered Territories of Islamism documents the complicity of the Left in the Islamist takeover.

French Communists had built their post-war reputation on being among the few in France not to collaborate with the Nazi occupiers. But the new collaborationnistes are largely members of the Left. Many are Communists. The DGSI report is an overview of a new occupation. Rougier’s book is an indictment of the collaborators with the occupation. Together they form a truly damning picture.

The French Resistance was a series of myths and lies meant to protect Nazi collaborators. The reaction to the Islamist invasion has resurrected the lies and the hypocrisies that underlay the occupation.

France is at war.  Hundreds are dead. There are soldiers in the streets. 150 occupied territories held by Islamists have been documented. And the collaborators will go on pretending that the whole thing is a massive outbreak of mental illness while urging everyone to pay no attention to the Islamophobes.

Couple says they were booted off US flight for refusing to...