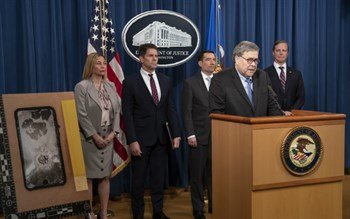 A security and counter-terrorism expert asserts the investigation into the act of terrorism committed in Pensacola, Florida, last month leaves a number of questions unanswered.

After concluding the December 6 shooting attack carried out at Naval Air Station Pensacola was an “act of terrorism,” Attorney General William Barr announced on Monday the expulsion of 21 Saudi national trainees from the military training program.

According to Barr, the deceased terrorist – 2nd Lt. Mohammed Saeed Alshamrani of the Royal Saudi Air Force – was “motivated by jihadist ideology” when he killed three servicemen and wounded eight others. Other trainees at NAS Pensacola also exhibited signs of extremism and criminal activity.

OneNewsNow spoke to Ryan Mauro, Clarion Project‘s director of intelligence, about the incident. While the governments of the United States and Saudi Arabia cooperate in many areas, including on counter-terrorism, Mauro argues, “[the U.S.] can’t expect a government based on puritanical Wahhabist rule to do a thorough vetting process to identify and stop extremists, [as the] the government [of Saudi Arabia] itself follows an extremist ideology.”

The counter-extremism consultant observes that terrorists such as Al-Qaeda, ISIS, and other Iranian-backed terrorists “want to overthrow the Saudi government, so [as a result] there is some good cooperation [between the Saudis and the United States].”

Nonetheless, Mauro admits that a few “key indicators of extremism, like anti-Semitism or a belief in theocracy,” are likely to be missed as the investigation of the attack moves forward.

“There is also a serious problem where sexual abuse of children – such as underage marriages – is part of ultra-conservative Islamic teachings,” he discloses. In fact, most of the expelled 21 Saudi military trainees were found to be in possession of child pornography.

The Clarion Project intel director offers a number of questions which have yet to be answered in public.

“What were the extremist connections that were discovered with the 21 Saudi trainees who are being expelled, [and] what material or activity is flying under the radar?” he asks. “And how many of their fellow trainees knew about the extremism and/or child pornography and failed to report it?

The national security analyst points out that “Jihadists want to end U.S.-Saudi cooperation – and the Pensacola shooter was certainly hoping that his attack would undermine that relationship.”

And while he contends that the U.S. needs to “tougher” on the Saudis – specifically, “stricter with vetting and expelling extremists and unsavory characters” – Mauro recognizes that plays into the hands of some of America’s enemies.

“Severing U.S.-Saudi military cooperation is one of the objectives of those targeting both countries,” he explains.

And how about Apple?

Mauro suggests a lot of unanswered questions remain about the refusal of Apple to unlock the phone used by the shooter, which could be impeding the investigation.

“How often do we hear about tech companies like Apple intruding on our privacy and collecting our own data for the sake of profit?” he asks.

“We have a known terrorist who isn’t even alive and therefore has no rights,” the consultant says, referring to Alshamrani. “And [yet] Apple is refusing to fully cooperate with the feds by unlocking the phones and sharing the data so Americans, including many Apple customers, can be better protected.”