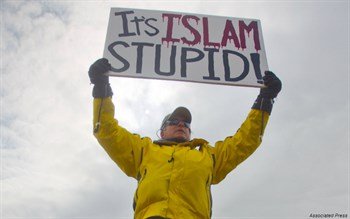 A nefarious organization with ties to America and South Asia is using a proxy to conduct its activities on U.S. soil, and the government continues to legitimize it through funding. That concerns Sam Westrop.

OneNewsNow spoke with the director of Islamist Watch, a project of the Middle East Forum. The London-born expert, Sam Westrop, expressed his concern about the Islamic Circle of North America (ICNA), which he describes as “a leading community organization in the United States for American Muslims.”

On the one hand, Westrop explains that ICNA provides a number of services, including “running mosques, welfare services, international aid charities, women’s shelters, and youth groups all around the country.” He adds: “ICNA seeks to be a complete service for the Muslim community.”

On the other hand, Westrop is quick to point out that ICNA is “a proxy for a South Asian Islamist movement called Jamaat-e-Islami (JeI),” adding that “its provision of all these cultural, welfare, and religious services for American Muslims is part of the large-scale effort to impose JeI’s ideology on America’s Islam.” JeI is a Deobandi-linked organization.

“Jamaat-e-Islami and ICNA have a very clear political allegiance when it comes down to South Asian politics,” the Islamist Watch director continues. He notes both are generally supportive of the Pakistani government and Prime Minister Imran Khan.

Thus, it isn’t surprising, he says, that “JeI and ICNA have long been tied to militancy and terrorism in Kashmir” against the Indians. “They also oppose the Modi government,” Westrop adds. Narenda Modi has been the prime minister of India since 2014.

Interestingly, the region of Kashmir has been the subject of a dispute and conflict between India, Pakistan, and China since 1947. When violent protests in Kashmir began to escalate in recent years, Westrop discloses “ICNA – as a Jamaat-e-Islami proxy – was quick to get itself involved with protests, lobbying, and various other actions across the United States.”

In line with his previous statement, Westrop argues “[these actions] were designed to denigrate and delegitimize India’s plans, and support the idea of Pakistani and Kashmir victimhood.”

ICNA is an Islamist organization that “supports theocratic ideas [which] are antithetical to everything that America stands for,” Westrop contends. Not only does he consider Sharia law antithetical, but Westrop particularly stresses “the dogma of a hardline, radicalized powerful force within American Islam which seeks to slowly encroach on the liberties and ideas of America [as ICNA has set out to accomplish].”

“A more short-term logistical point,” he says, “is the fact that for decades everyone on the right has been obsessing over a group called the Muslim Brotherhood.” And this is not without reason, he explains: “The Muslim Brotherhood is as dangerous, as threatening, as problematic as JeI and ICNA.”

Westrop attests, “things have gotten absolutely worse under the Trump administration, as far as financing goes.” Federal government agencies have provided over $47 million to at least 60 Islamic institutions since 2007 in the form of more than 400 grants and contracts.

“Ten million dollars went to ICNA in the belief that somehow they can provide a charitable service. This is the federal government legitimizing Islamists,” asserts the Middle East Forum affiliate.

In early 2019, Rep. Jim Banks (R-Indiana) introduced H.Res.160 in an attempt to address part of the problem. This House resolution “calls upon the governments of Bangladesh and Pakistan to stop Jamaat-e-Islami from threatening regional stability and urges U.S. agencies to end partnerships with groups affiliated with Jamaat-e-Islami.”

As a non-American, Westrop says “[he can] see Americans doing exactly what Europe did 10 years ago – and they’re regretting it.” It is unfortunate that the United States is not learning “the lessons that Europe learned so painfully,” he assesses.

Westrop acknowledges that “the British, French and German governments have all said they made a terrible decision funding Islamists to fight Islamism.” Outside of the attempt at attaining a House resolution, it is apparent most Americans haven’t spent much time thinking about this, he observes.

“They’ve never really looked to see why Europe is having so much trouble,” he concludes, “and then realize that part of the problem is the government giving power and funds to the very people who radicalize and sow extremism.”