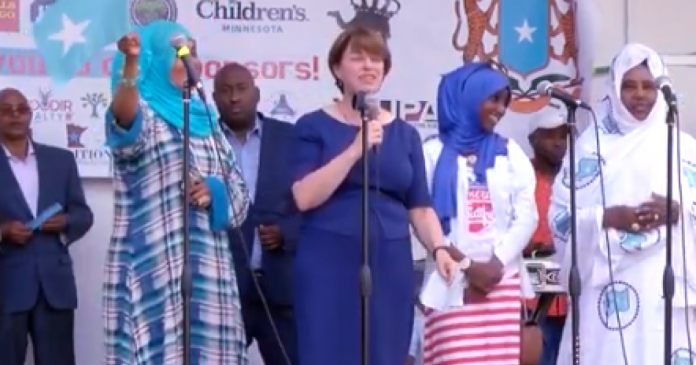 Sen. Amy Klobuchar (D-MN) has emerged as an unexpected top tier Democrat contender for the presidential nomination after surprisingly strong showings in the Iowa caucus and the New Hampshire primary.

She has presented herself as a moderate amidst a field of candidates who are trending in a more radical direction to pander to the growing contingent of extremists in the Democrat base. Her strategic plan has paid off and given her a greal deal of momentum with two contests down, and 48 to go.

“It is easy to go after Washington because that’s a popular thing to do,” Klobuchar said. “[It] makes you look like a cool newcomer. I don’t think that’s what people want right now. We have a newcomer in the White House, and look where it got us. I think having some experience is a good thing.”

However, Klobuchar is anything but a moderate, and her past record has been atrocious, particularly pertaining to her support of the Somali invasion in her home state of Minnesota.

“I am so proud to work with this community, and I am so proud that so many of your children are in our schools, and I have learned that your graduation rate is improving,” Klobuchar said.

“I mostly want to thank you for being such a part of Minnesota. When people ask me what is Minnesota, I say: this is Minnesota!” she concluded, pointing to all the Somalis at the event.

Her entire groveling speech can be seen here:

It is because of the policies supported by Klobuchar that Minneapolis has become the top hub for Islamic terrorism in the entire United States:

More men and boys from a Somali American community in Minneapolis have joined – or attempted to join – a foreign terrorist organization over the last 12 years than any other jurisdiction in the country.

FBI stats show 45 Somalis left to join the ranks of either the Somalia-based Islamic insurgency al-Shabab, or the Iraq- and Syria-based ISIS combined. And as of 2018, a dozen more had been arrested with the intention of leaving to support ISIS. Both numbers are far higher than those of alleged terrorist wannabes who left or attempted to leave the country from other areas in the country where Muslim refugees have been resettled…

“For over a decade, Islamist terror groups have been able to recruit from Minnesota. This is, in part, because Minnesota has a large Muslim population compared to other parts of the U.S,” said Robin Simcox, a terrorism and national security expert at The Heritage Foundation. “However, it is also because there have been small segments of the Somali community there that have struggled to integrate into the U.S. Al-Shabaab and ISIS have exploited this – upon religious, political cultural and identity issues to offer a compelling alternative to Western democracy.”

Josh Lipowsky, Senior Research Analyst at the Counter Extremism Project concurred the immigrant community in Minnesota has proven to be ripe for targeting in recent years by specifically playing into the card of being something of an outsider and that “society has shunned them.”

Local authorities contend it has been challenging for them to penetrate the Somali-American community in Minneapolis, who remain a unique immigrant population that hasn’t actively assimilated with the neighboring township. In the neighborhood of Cedar-Riverside, for example, it’s possible to go about day-to-day business without ever interacting with a non-Somali.

Klobuchar’s dangerous record pertaining to Somali migrants shows that she is as extreme as anyone in the Democratic field running for president this year.