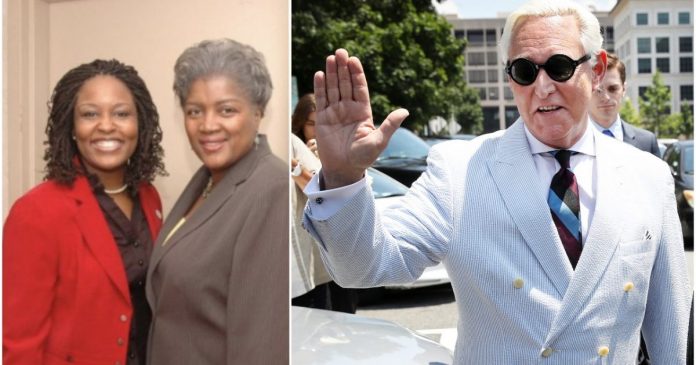 Conflict of interest much?

One juror in the case against long-time Trump associate Roger Stone has been revealed as a member of the Trump-hating resistance by her social media profile.

Self-help author Mike Cernovich noted that Tomeka Hart was one of the jurors on the case, and she has bashed President Trump incessantly on her Twitter account.

Cernovich pointed out the fact that this Democrat activist and anti-Trump resistance member was even allowed on the jury shows a stunning level of misconduct by the judge who presided over the case.

“How did a federal court judge ever allow a far left wing activist to sit on a case where a close Trump associate faced trial?” Cernovich asked.

“The Roger Stone prosecution is a disgrace, it’s lawless, and it was rigged from the beginning,” he added.

President Trump has recently made his opinion very clear regarding the railroading of his former confidant. He feels it is a serious miscarriage of justice that prosecutors initially recommended nine years in prison for Stone.

“The fact is Roger Stone was treated horribly…Roger Stone for doing – nobody even knows what he did,” Trump said on Wednesday.

“We have killers, we have murderers all over the place nothing happens and then they put a man in jail they destroy his life, his family, his wife, his children. Nine years in jail. It’s a disgrace. In the meantime, Comey walks around making book deals–the people that launched the scam investigation and what they did was a disgrace. And hopefully it will be treated fairly everything else will be treated fairly,” he added.

Attorney General Bill Barr has stepped in to address the cruel and unusual measures taken against Stone, scrapping the proposed nine-year prison sentence, and four prosecutors have removed themselves from the case in the fall-out from their shameful actions.

“The American people must have confidence that justice in this country is dispensed impartially,” Senate Minority Leader Chuck Schumer (D-NY) wrote to inspector general Michael Horowitz. “That confidence cannot be sustained if the president or his political appointees are permitted to interfere in prosecution and sentencing recommendations in order to protect their friends and associates.”

Although President Trump has not yet committed to pardoning Stone, that may be what he has to do in order to push back against the deep state’s illicit stranglehold over the court system.