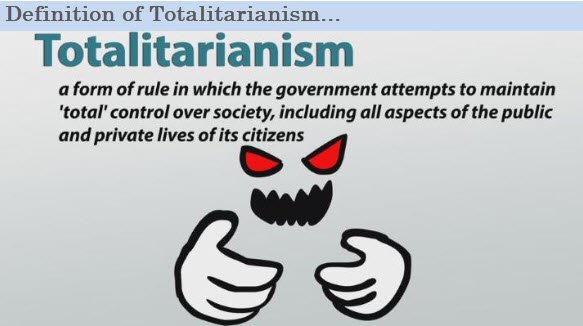 To describe Canada as a totalitarian state-in-progress sounds like a gross and indeed absurd exaggeration. Yet many premonitory signs are present. In the words of political philosopher William Gairdner, author of The Book of Absolutes, The Great Divide and The Trouble with Canada, Canada “has just crossed the red line between soft-socialism and soft-totalitarianism.”

Gairdner has assembled a virtual mountain of evidence for his claim: Bill C-25 seeking to impose “diversity” on all corporations; financial penalties against organizations that do not comply with government programs; a teeming brigade of government surveillance “Inspectors,” that is, spies — wage spies, speech spies, feminist spies, pay-equity spies, Human Rights spies; paralegal bodies known as Human Rights Tribunals with the power to levy crippling fines, bankrupt families and shut down businesses, to impose prison time for contempt of court, and to compel conformity via “re-education.”

The list goes on. Bill C-16 prohibits discrimination on the basis of gender identity and gender expression, which sounds unexceptionable except for the obvious fact that “discrimination” is in the eye of the offended beholder and the government enforcer. The bill effectively mandates that citizens must address others by their preferred pronouns and transgender fantasies — or else! It’s “zir,” “ze,” “zem” or “zeir” or you’re done for. It’s Emily, not Brian, or your job’s in peril. The Ontario Human Rights Code stipulates that “refusing to refer to a trans person by their chosen name and a personal pronoun that matches their gender identity… will likely be discrimination” in social areas like employment, housing, education and so on. As Queen’s University law professor Bruce Pardy writes, “human rights have become a weapon to normalize social justice values and delegitimize competing beliefs.” There are other laws on the books, bills such as C-59,  C-75 and C-76 that reduce and even criminalize freedom of expression, infringe on privacy rights, compromise due process and render government transparency a thing of the past.

The assault against normalcy, common sense, civil rights and charter freedoms gives no indication of relenting. Bill S-202, an act to amend the Criminal Code now before Parliament, would outlaw what the government misleadingly calls “Conversion Therapy,” that is, by criminalizing parents, lawyers, physicians and church leaders who object to state-compelled sex-reassignment procedures, the bill would effectively prevent minor children undergoing forced transgender operations, surgical and hormonal, from receiving the help they need. “This whole agenda to sterilize and mutilate children,” write the editors of Action4Canada “is pure evil and in violation of…the Charter of Rights and Freedoms, the Universal Declaration of Human Rights, The International Covenant on Civil and Political Rights, as well as a physician’s ethical commitment promising to ‘First, do no harm.’”

In an article for the National Post, columnist Rex Murphy, one of that rare breed of truth-telling Canadian journalists, writes: “This government, or the agencies of this government, are establishing a pattern of misusing the authority of the law.” Among other instances of official malfeasance, Murphy skewers the Liberal government’s fraudulent case against Rebel News founder Ezra Levant for publishing and promoting a book critical of Prime Minister Justin Trudeau, The Librano$, during the October 2019 election without “registering” the book with a government agency. “Can anybody name any other book, ever,” Murphy asks, “which has been the subject of an investigation by the Commissioner of Canada elections?…Will PEN Canada, defender of authors and journalists, take up the banner for Mr. Levant?” Rhetorical questions, obviously.