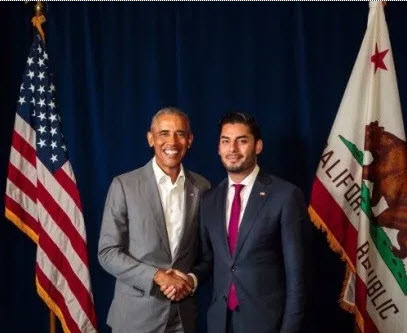 Ammar Campa-Najjar, the grandson of a muslim terrorist, has advanced to California’s 50th Congressional District general election after winning the March 3rd primary election. He will face Republican Darrell Issa on November 3rd 2020.

Ammar is the grandson of the mastermind of the Munich massacre. Ammar’s grandfather, Muhammad Yusuf al-Najjar also known as Abu Youssef, was a member of the Palestinian terrorist group Black September, which took eleven Israeli Olympic team members hostage and killed them in 1972. Muhammad Yusuf al-Najjar helped mastermind the terror attack, known as the Munich massacre. Al-Najjar was assassinated for his involvement in the massacre.

Ammar once referred to his grandfather as a legend on social media.

It seems his grandfather is not the only terrorist connection that Ammar has. Ammar attended the same mosque as three of the terrorist that carried out September 11th terror attacks in 2001.

In 2012, Ammar served as Deputy Regional Field Director for Obama’s re-election campaign. After the election, he worked in the Obama administration as an official at the Labor Department. Ammar was endorsed by Obama during the 2018 election.

Ammar also ran for Congress in 2018 but thankfully he was defeated. Let’s hope he’s defeated in November 2020 as well!

FACT CHECK: DID CONGRESS HIDE LANGUAGE THAT ‘NULLIFIES’ THE INSURRECTION ACT IN THE COVID RELIEF AND GOVERNMENT SPENDING PACKAGE?

Rashida Tlaib: ‘Allah’ Has Given Opportunity to Show ‘Power of Muslims in Georgia’