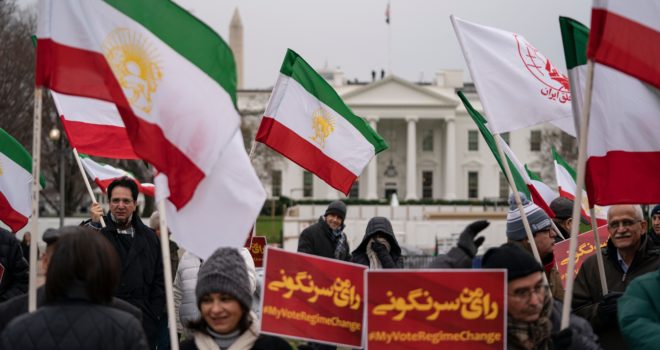 Suppose the Muslim world were to lose faith in Islam. Suppose that Muslims ignored the Koran, stopped going to mosque and dismissed Muhammad as a blood thirsty warlord and slave trader. How would the Catholic Church respond? Would Church leaders greet the news enthusiastically, and declare their solidarity with the newly emancipated Iranians, Saudis, and Egyptians? Would they declare their esteem for the millions who had finally thrown off the yoke imposed by a false prophet 1400 years ago?

That’s what one might expect, but don’t be too sure. Given certain Church leaders’ recent enthusiasm for Islam and their campaigns against “Islamophobia,” one can’t help but wonder. Could it be that Church leaders might even be disappointed that Muslims had abandoned their Abrahamic faith?

At first glance, these may seem to be purely academic questions. One could argue that there’s no chance that Muslims are going to abandon Islam. So, why speculate? But, in fact, there are good reasons to entertain them.

One reason to raise the possibility of a loss of faith among Muslims is that it’s happened before and, from a historical perspective, not that long ago. The Muslim world didn’t suffer a total loss of faith in Islam, but its faith was severely weakened.

Some historians say that doubts about Islam began with Napoleon’s conquest of Egypt, and then increased with the downfall of the Ottoman Empire after World War I and Turkey’s subsequent transformation to a secular state under Kemal Atatürk. By the middle of the twentieth century, much of the Muslim world had begun a process of Westernization and secularization. Islam was still practiced, though more out of habit than conviction.

Not everyone was happy with this “Islam Lite,” however. As early as the 1930’s, Islamic groups such as the Muslim Brotherhood began plotting to restore pure Mohammedan Islam to its rightful place. Then, in 1979, the slow drift away from Islam was reversed. In the wake of the Iranian Revolution, a revived and expansionist fundamentalism quickly spread through the Middle East. A good account of what happened can be found in BBC reporter Kim Ghattas’ new book Black Wave. Ms. Ghattas describes how, following the clerics’g rise to power in Iran, the eponymous “black wave” of dark hijabs, chadors, and abayas soon engulfed much of the Muslim World.

Yet Ms. Ghattas sees signs that the black wave may be receding as more and more people “rise against the forces of darkness that have impoverished the region…” She’s particularly hopeful that Iranians will throw off their clerical oppressors. Yet another reason to question the viability of Islam in the Middle East. Her hope finds confirmation in a quote from an Iranian Christian leader in the 2019 documentary film, Sheep Among Wolves, Volume II. “Islam is dead,” he declares. The “mosques are empty,” and “no one follows Islam inside of Iran.”

That’s undoubtedly a large exaggeration, but there is a good deal of anecdotal evidence that a turnaround may be underway in Iran. The mission research organization, Operation World, named Iran’s as the fastest-growing evangelical Church in the world. Mohabat News, the country’s Christian news agency, reported that “Christianity has been growing at an exponential rate.” Meanwhile, Open Doors USA reported that there may be up to a million secret believers. And Iran’s Intelligence Minister has admitted that mass conversions are “happening right under our eyes.”

Much of this growth can be attributed to disillusionment with the hardline government. According to a pastor in Sheep Among Wolves, “The best evangelist for Jesus was the Ayatollah Khomeini.” Why so? Because “the ayatollahs brought the true face of Islam to light and people discovered it was a lie.”

The rapid spread of the COVID-19 in Iran has also added fuel to the fire of discontent. The fact that clerics in the city of Qom have refused to close the busy pilgrimage sites despite the demands of public health officials has resulted in increased skepticism about the mullahs.

In 2018, the director of Elam ministries argued that “Iranians have become the most open people to the Gospel.” That may be so, but the conversion of the whole country to Christianity is probably not on the immediate horizon. Still, the possibility that Iran may be moving in that direction brings us back to our original question: How would the Church respond?

Ironically, there are indications that the response might not be enthusiastic. In the first place, many of those who are turning away from Islam are turning to secularism and even to atheism; most of the Iranian converts to Christianity are converting to Evangelical and Pentecostal sects. In the second place, the Vatican has been a rather solid supporter not only of the Iranian regime, but of Islam in general.

In a 2018 Crux article, John Allen wrote: “There are few diplomatic relationships in which the Vatican has invested greater efforts in recent years than the one with Tehran, seeing it as fundamental not only to a series of thorny situations around the world… but also to a broader quest to avoid a much-feared ‘clash of civilizations.’ ”

Likewise, the Iranian regime is heavily invested in its relationship with Rome—as indicated by the fact that Iran has more diplomats accredited to its Vatican Embassy than any other country except the Dominican Republic. Perhaps the most important sign of alignment with the Tehran regime was the Vatican endorsement of the Iranian nuclear agreement—an endorsement that was strongly seconded by the American bishops.

But it’s not just the regime that Iranian protesters object to. Many are also protesting against the religious ideology that the clerics use to justify their power. During the mass protests in 2018, one popular slogan was, “The people are paupers, while the mullahs live like gods.” During the January 2020 protests following the downing of a Ukraine passenger jet, videos showed students chanting: “We don’t want Islamic Republic.” This, one assumes, does not mean that they are opposed to the idea of a republic, but that they are opposed to one that is based on the religion of Islam.

Unfortunately, in recent decades, those certain Church leaders have positioned themselves as defenders of the Islamic faith. They have repeatedly declared their solidarity with Islam and, despite acres of evidence to the contrary, they continue to maintain that Islam is a religion of peace that has “nothing to do with terrorism.” Not only has Church leadership come to the defense of Islam: it has, arguably, become an enabler of Islam. The spread of Islam into Europe was made possible in part by the European bishops’ lobbying campaign in favor of Muslim migration, and their frequent reminders that Catholics have an obligation to welcome the stranger.

More than that, many Church leaders have committed themselves to the proposition that Islam and Christianity are close cousins—two faiths that share both a common Abrahamic heritage and common theological ground. After all, as Nostra Aetate reminds us, Muslims “revere” Jesus, “honor Mary,” and “value the moral life.”

So, it’s quite possible that instead of standing by oppressed Muslims, Church leadership may adopt a stand-by-your-imam attitude. They have invested heavily in the idea that Christians share a common faith with Islam, and it will be difficult to let go of that idea. On top of that, recent Church documents seem to suggest that “people of the book”—i.e., Muslims and Jews—are not really in need of evangelization. Conceivably, Church leaders might even criticize Protestant evangelicals for alienating Muslims from their authentic faith tradition.

If all of this is difficult to credit, remember that, in recent years, the Vatican entered into a power-sharing agreement with the Communist Party of China. It’s not unthinkable that, if push comes to shove, it would stand with the ayatollahs in Iran rather than with Iranian Christians or disaffected Muslims. In turn, Muslims who are trying to throw off the yoke of Islam might come to see the Catholic Church as simply another oppressive faith—a twin brother of Islam. At a time when Islam is being rejected by more and more Muslims, Catholic leaders should think twice about identifying the Church too closely with Islam.

In the middle of the last century it looked like supremacist Islam was dying a natural death. Then, a relatively small number of true believers managed to fan the dying embers back to life. It would be ironic if, in the twenty-first century, Islam entered into a similar period of decline, and ill-advised Catholics strove to keep it alive.