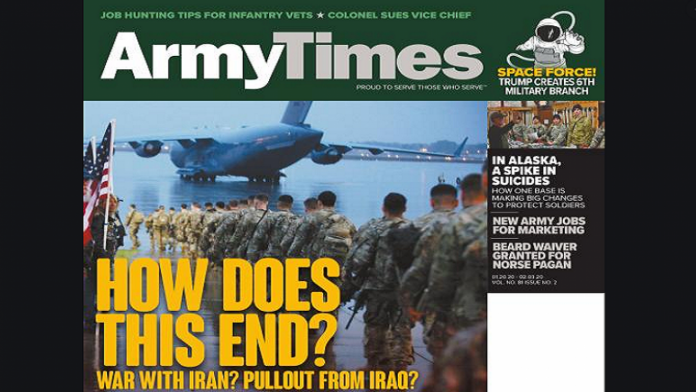 Prior to my February 26 US Army War College talk, the Council on American-Islamic Relations (“CAIR”), Linda Sarsour, and their leftist allies began another round of press releases and petitions, referring to me as an “infamous Islamophobe” and urging the War College to cancel my lecture on Sword and Scimitar, which CAIR insisted would be “hypocritical, ahistorical and hateful.”

In the midst of all this, Kyle Rempfer, a reporter from the Army Times, widely regarded as the preeminent publication for military men and veterans, contacted me.  Along with answering his questions, I made it a point to stress that CAIR is an “unindicted co-conspirator” of terrorist Hamas, and that US allies such as the UAE designate CAIR, by name, as a “terrorist organization”—right up there with ISIS, al-Qaeda, and the Muslim Brotherhood.

When the report, “Muslim-American advocates protest upcoming Army War College speaker,”  came out, I was not surprised to discover that Rempfer had quoted, at great length, CAIR’s false claims and criticisms against me—amplified by his own independent research: he had told me beforehand that he meant to be absolutely transparent, and did, to his credit, quote some of my defenses.

That said, and considering his supposed premium on “transparency,” I was a little surprised to see that he did not deem it relevant to inform Army Times’ readership that CAIR is a designated co-conspirator in the largest terrorist funding case in US history—even though I had sent him ample documentation, including this US Justice Dept. letter and other court evidence that makes clear what CAIR’s “work in America” is all about.  To quote from the “explanatory memorandum” of the Muslim Brotherhood (CAIR’s parent organization):

The Ikhwan [The Brotherhood and its offshoots] must understand that their work in America is a kind of grand Jihad in eliminating and destroying the Western civilization from within and “sabotaging” its miserable house by their hands and the hands of the believers so that it is eliminated and Allah’s religion is made victorious over all other religions.

Why no “transparency” concerning these court documented facts?  Could it be they raise serious questions about CAIR’s motives, so that, instead of appearing as concerned “Muslim-American activists” trying to prevent “hate” and “bigotry,” the truth will become apparent—that CAIR’s only motive was to shield America’s military leadership from a presentation that unequivocally demonstrated that Islamic terrorism is not an aberration but a perfect continuation of Islamic history vis-à-vis the West?

Similarly, while presenting one of my defenses, the report did so in mangled form, indicating that I had been “attacked” by my “own readers and Jihad Watch’s director, Robert Spencer, for insisting critics of Islam use words like ‘Islamist,’ instead of ‘Muslim.’”

For the record, Spencer never “attacked” me, nor does he insist on the word “Muslim.”  Rather, what I had in mind was a 2012 exchange, which ended with me supporting the use of words “like Islamist” and Spencer supporting the word “Islamic supremacist.”  A purely semantic disagreement, though in the aforementioned quote Spencer appears to have been conflated with those angry readers who did/do insist on using “Muslim” in every circumstance (which leads to counterproductive confusions).

Due to these issues, I made it a point to call Rempfer.  He had no response as to why he failed to mention—that is, failed to be transparent about—CAIR’s well documented terror ties; when pressed on the issue, he said that it was his editor’s decision not to include this information and that I should take it up with her.  He also refused to revise the mistake concerning Spencer, even though I later emphasized in an email that, “as that sentence currently stands, your own readers will walk away with a demonstrably false impression [concerning Spencer’s views]; as such, it seems in all our interest to fix it.”  He replied that that’s how I had worded it, to which I replied, even so, I’m telling you now that it’s wrong and should be fixed. To this he said it was too late to make any changes to his report, since it had already been published.

When I looked at the report and noticed that they actually had re-opened it and made changes after publication—but only to add more fuel against me, by quoting Georgetown professor emeritus John Voll, who “does not agree with Ibrahim’s view”—I knew there was more afoot.

All it took was a few seconds online to make sense of everything—including Rempfer’s constant fallback, that everything was up to his editor, who refused to budge.

As the Daily Caller reports, on January 10, “The Army Times appointed as its top editor a 28-year-old feminist from Brooklyn who has repeatedly tweeted that she hates President Donald Trump.”  Sarah Sicard’s other “credentials” include “interning for several Democrats …, contemplating art school,” and writing “for a marijuana publication called the Bluntness.”  Here are some of this supposedly “objective” editor-in-chief’s tweets:

In January 2019, she said in a tweet that it was “SAD” that she had lost followers because of “all my callouts of @POTUS.”

Indeed, it seems that the Army Times has also been “losing followers” since Sicard took over—as evidenced by the fact that most of the comments on the report in question are critical of CAIR, if not the Army Times for shielding them.

“You a-holes need to change your name to Taliban Times,” writes Tyler Johnston. “What an embarrassment you are to this country. Your use of the word Army in your title is taking a big on the people who made it great. You low life’s make me sick.” Robert Sterling comments: “Nothing says ‘freedom’ like kowtowing to a known terrorist supporting mouthpiece of the Muslim Brotherhood and oppressing any viewpoint they don’t like. Viva AWC.”

The leftists corrupt everything they touch. They can never just leave well enough alone. Now their grubby claws have managed to gain control of yet another American icon, the Army Times. The Army Times was started in 1940 by Mel Ryder, just in time for World War II. For over 8 decades and 6 major conflicts, including the Cold War, it has provided news and other objective information to the members of the United States Army…at least until now….

After highlighting some of Sicard’s unprofessionalism, Red State concludes:

This is yet one more example of hatred for Donald Trump being used as an excuse to defy journalistic standards and place a highly biased, leftist hack in what was once a well regarded news source for members of the United States Army.

Indeed; and it also explains the Army Times’ pro-leftist bias and unethical tactics in defense of a notorious Islamic terror-linked organization, CAIR.