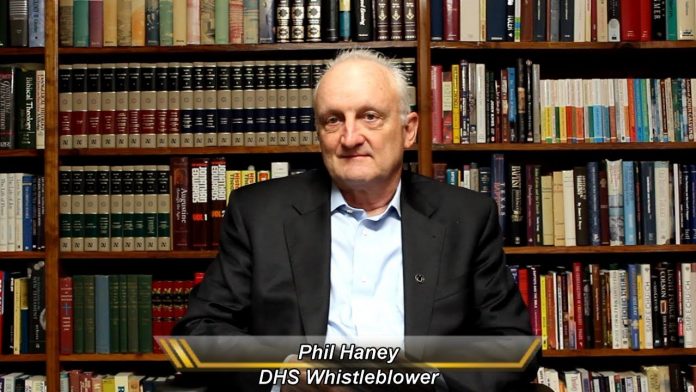 Since former Department of Homeland Security (DHS) staffer Philip Haney, who blew the whistle on the Obama administration allegedly scrubbing the intelligence on radical Islamists in the United States, was found dead from a shotgun wound to the chest, those who knew him are convinced he was murdered.

Rep. Steve King (R-IA), told Breitbart News that Haney was a good friend who had confided in him that he had enemies who wanted to stop his revelations before the Senate Judiciary Committee in 2016, and that his upcoming book, See Something, Say Nothing: A Homeland Security Officer Exposes the Government’s Submission to Jihad, would “name names.”

King said the first time he met Haney he was wearing a thumb drive on a lanyard around his neck that King believes contained the data that was scrubbed from his DHS hard drive.

“I would bet the farm on that,” King told Breitbart News.

Haney also told King that he had archived the data in several places to protect it from disappearing, and had already made public in his testimony and book Obama’s policy on radical Islam.

“My recollection is that it was about 800 individuals whose records were expunged by DHS at the direction of the Obama administration — that would be 800 potential radical Islamists that are roaming around this country, perhaps plotting against the safety and security of the United States of America,” King said.

“And Phil did say that he did believe that there were two of those mass murders that could have, and perhaps would have, been prevented,” King said, referring to the mass terror attacks by radical Islamists at the Pulse nightclub in Florida and in San Bernardino, California.

“So I think people need to know that — that Americans died at the hands of evil, radical Islamists that may be alive today if the records that Phil was keeping would not have been expunged at the direction of the Obama administration,” King said.

“People just need to know that and then understand what an honorable man Phil was,” King said.

Those who knew Haney, who died at 66, stand behind him as a man who deeply abided by his Christian faith and want justice to be served in his death, King said.

“Those of us that knew Phil — and I’ve talked to a good number of his friends since then. It’s universal,” King said. “I haven’t had anyone who knew Phil say, ‘You know there might be some truth — he could have’ — not one.”

“You don’t take your own life at the first challenge and Phil met many, many challenges,” King said. “He wasn’t facing the worst challenges of his life — he’d already said goodbye to his wife just a year ago. And he was close to completing his second book and that would have driven him.”

“Even if there had been some bad health information as some have said, it would had accelerated Phil’s effort to complete his life’s work,” King said. “It wouldn’t have caused him to end his life’s work.”

“A man that is dedicated to a life’s work doesn’t commit suicide,” King said.

King told Breitbart News that he hopes investigators start with the premise that Haney did not take his own life.

“I do believe the investigation starts with the assumption that it’s homicide and then works from there,” said King, and added that his supporters will demand answers.

“Every forensic question that one can devise had better be answered with precision, with data and lab samples to back it up,” King said. “And that includes any powder burns on his hands, on his chest on his shirt.”

“Anything that has to do with blood on the ground. The ballistics on the gun — whose gun was it?” King said.

The Ledger Dispatch, a local newspaper in the California county where Haney was living and where he died, reported on the investigation that is underway:

The ACSO [Amador County Sheriff’s Office] scheduled a forensic autopsy to be performed by forensic pathologists from the Sacramento County Coroner’s Office. Additionally, they have reached out to law enforcement partners in the Federal Bureau of Investigation (FBI) to assist in analyzing documents, phone records and a laptop that were recovered from the scene and from Haney’s RV. The ACSO is currently in possession of Haney’s vehicle, the firearm located at the scene, and Haney’s RV and the ACSO will be requesting evidence processing assistance from the FBI on these items as well.

ACSO investigators conducted a neighborhood canvas and interviewed the RV park neighbors where Haney’s RV was located on the day of the incident, along with checking key areas for any video surveillance that may exist from that time. The investigators are continuing to follow-up with the overwhelming number of persons calling the ACSO office from throughout the United States asking for detailed information on the investigation.

It is unclear whether the thumb drive that King and others have described was among the recovered items.

The ACSO has called the early reporting that Haney’s death was a suicide “misinformation,” according to a statement it issued:

Unfortunately, there was misinformation immediately being put out that we have determined Mr. Haney’s death to be a suicide. This is not the case. We are currently in the beginning phase of our investigation and any final determination as to the cause and manner of Mr. Haney’s death would be extremely premature and inappropriate. No determination will be made until all evidence is examined and analyzed.

The investigation is active and will be ongoing. No further details will be provided at this time.

Haney’s fiancé, Denice Gary-Pandol, a podcast and radio show host in Bakersfield, was reached by the Ledger Dispatch for comment and said she did not believe that Haney had killed himself, that he had been happy and looking forward to planning the couple’s wedding in April.

In fact, at a town hall in California in 2016, Haney spoke about a meeting with his attorney, Joseph Schmitz, who warned him about the danger he faced as a whistleblower. At the time, Haney was in still living in Washington, DC.

“Joe Schmitz taps his forehead, looks right at me and says, ‘The things you have in your head; the things you know people will kill you for,’” Haney said. “And he wasn’t talking about Jihadis from Yemen. He was talking about people within a square mile from where we were standing — right in view of the Rayburn [House Office] building.”

King and Rep. Louie Gohmert (R-TX), who also counted Haney as a friend, have both spoken on the House floor about his death.

“I’m standing on the floor here saying, Madame Speaker, I don’t believe that Phil Haney committed suicide,” King said on February 28. “I expect that we’re going to get a thorough investigation. The evidence that is coming to me indicates that he was murdered.”

“Philip Haney — he was one of the finest, most patriotic, competent people I’ve ever met in my life,” Gohmert said in his House floor speech, and noted that Haney was one of the “founding members” of DHS when it was formed after the 911 terror attacks.

“A man of absolute honesty, complete integrity who cared deeply about the future of this country,” Gohmert said. “He was also a Christian brother and that certainly affected so much of what he did.”

Gohmert said he and Haney had made an agreement on their fates.

“I’d been concerned about his safety, with all the information he knew and people who could’ve gotten in trouble.” Gohmert said on February 26. “We had a mutual pact. It said: Either one of us ended up committing suicide, then the other is going to make sure that the truth wins out.”

King told Breitbart News that beyond praising Haney, he hopes his supporters can help get the truth he had yet to reveal and cement this legacy.

“A better way to remember him is find the data, help finish his book, get it published, and make sure America knows that which Phil worked so hard to give us the opportunity to know,” King said.