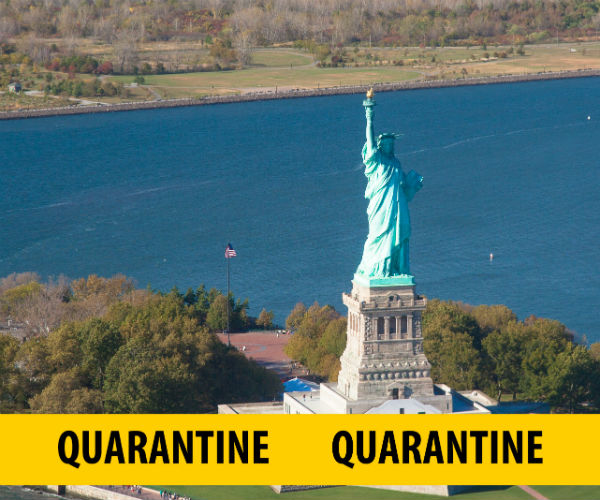 The temptation to turn to government in times of crises is natural.

So is the willingness to allow government to follow its natural inclination to seize ever more power for itself. But in that way lies a slippery slope to socialism — a half-step away from communism/Marxism.

That is not the direction a free people wants to go in.

We have the example of Communist China before us.

To begin with, the Chinese Communist Party (CCP) itself may well be to blame for unleashing this new coronavirus on the entire world, via the offensive biological weapons (BW) work known to take place in China’s Wuhan Virology Institute.

But that aside, Xi Jinping’s regime responded to the outbreak as an utterly ruthless, totalitarian authority: with brutal coercion, deliberate deception, and the censorship, detention, and disappearance of brave medical personnel who tried to sound the alarm.

Civil liberties are not among the priorities of a communist dictatorship.

And that’s just the way Beijing treats its own citizens.

Now, China is spearheading a global disinformation campaign intended to deny all responsibility for the pandemic and shift blame to the United States.

Regime media outlets like the Global Times have gone even further, carrying open threats to use EMP (Electromagnetic Pulse) attacks against U.S. Navy ships, use financial tools to attack the U.S. and global financial system, and even to withhold shipment of pharmaceutical products we have been so foolish as to allow the Chinese to manufacture.

The most recent piece of CCP’s campaign to shut down truthful reporting was its March 17 2020 decision to expel around a dozen U.S. journalists working for The New York Times, The Wall Street Journal, and The Washington Post.

Let’s contrast that sort of tyrannical behavior with the response elsewhere in the free world.

U.S. President Trump and the administration’s White House Coronavirus Task Forceheaded by Vice President Mike Pence have assembled and launched a massive public-private partnership harnessing the resources of the federal government together with the incredible capacity of our free-market capitalist system.

That team stands daily, for one hour or more at the White House podium, delivering updates and taking questions from the media. They apprise us of the advances being made with medical and medical supplies production, while openly admitting the shortfalls which still exist. The White House Coronavirus Task Force honestly acknowledges that the worst is yet to come, but then offer Americans unflagging encouragement that we will get through this together.

That is leadership. That is how to instill confidence — and calm fears.

And yet, a word of caution.

We need our government’s help in many ways right now, but government is not the solution. It’s there to help, not to take advantage of this crisis to grow the federal, state, or local bureaucracy even larger.

After a century of relentless growth, progressives would like to see this behemoth become even more vast, more complex — and less accountable. We must not surrender our own individual liberty so much that Bolshevik Bernie loses the race for president, but that we lose the Republic.

—When we see the Democratic/Marxist Mayor of New Orleans, LaToya Cantrell, sign an order banning the sale and/or transportation of firearms in New Orleans, we must know this is an unconstitutional act.

—When the Mayor of Champaign, Illinois Mayor Deborah Frank Feinen signs an Executive Order banning all public assembly as well as the sale or purchase of any guns or ammunition, and claiming the right to seize private property, we must know this is a direct violation of the U.S. Constitution.

—When New York City Mayor Bill de Blasio declares the Wuhan coronavirus pandemic is reason for the federal government to nationalize “crucial factories and industries,” we must know we are looking down the barrel of fascism.

“You never want to let a serious crisis go to waste,” was the war cry of Rahm Emanuel, another socialist progressive. This is an echo of Saul Alinsky’s “Rules for Radicals,” which is about the collapse of society and seizure of power. Now, no serious American thinks that President Trump intends to unleash the liberty-crushing arrest, detention, social-credit, or surveillance measures wielded by China. But as we have been warned (by Thomas Jefferson?) “The price of liberty is eternal vigilance.”

So, as Andrew McCarthy wrote recently, “It is not sustainable for government to combat the disease by ordering communal and commercial activity to cease, then trying to compensate increasingly destitute citizens by borrowing and printing money to throw at them.”

If we must live under “shelter in place”measures for a time to defeat this virus, so be it.

Those who lose jobs and businesses may welcome federal financial assistance.

Cutting regulations to speed solutions to market is most always a good thing.

But, as we confront this crisis, let us be mindful of just how much authority we are ceding to a centralized government authority. We are a free society. If we relinquish that in a moment of fear, we may not get it back.Progressivism, socialism, and communism await those who neglect that “eternal vigilance.”

Clare M. Lopez is the Founder/President of Lopez Liberty LLC. She formerly served as Vice President for Research & Analysis at the Center for Security Policy and was a career CIA operations officer. To read more reports by Clare M. Lopez, Click Here!