The High Court ruling that Speaker Edelstein must put his job up for a vote appeared to have stalled what many saw as an attempted coup by Likud. Relief may prove premature

Last Wednesday, the speaker of the Knesset, Likud’s Yuli Edelstein, shuttered the plenum in order to prevent a vote that would likely have seen him replaced by a candidate from the rival Blue and White party.

His move prompted an extraordinary phone call to Edelstein from Israel’s President, Reuven Rivlin, who warned him of the harm to Israeli democracy caused by the shuttering of parliament — especially at a time of global and national emergency when Israel is battling the coronavirus pandemic.

Because the Knesset was out of action, crucial parliamentary committees were not established. Most dramatically in the context of the fight against the virus, the government that same day utilized emergency regulations to introduce, without parliamentary oversight, the digital monitoring of the movements of all Israelis, in order to alert them if they have been in unwitting contact with virus carriers and need to self-quarantine. 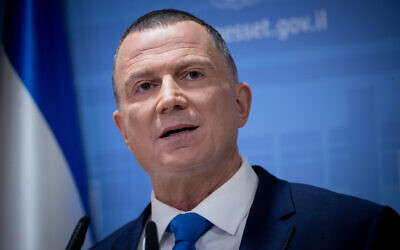 A parliament suspended by a speaker whose job would have gone to the newly elected majority? (Blue and White’s Benny Gantz was tasked last Monday with building the next coalition government because 61 of 120 Knesset members recommended him to Rivlin for the post.) A government introducing drastic surveillance over all citizens with no Knesset supervision? A judiciary already ordered onto a reduced, emergency footing amid the crisis, on the orders of another Likud politician, interim Justice Minister Amir Ohana?

And all of this overseen by a prime minister who has been leading a transitional government having failed to win a Knesset majority in three elections inside a year?

While Rivlin did not specify to Edelstein that his actions might be construed as preventing the proper representation of the will of the electorate, and thus be seen as an attempted political coup, plenty of others have seen in the events of the past few days precisely such an attempt by Netanyahu, Edelstein, Likud and its right-Orthodox bloc to illicitly retain central channels of power.

Some 600,000 Israelis are reported to have participated in a virtual “save our democracy” protest online on Saturday night, which was addressed by former security chiefs and by the former deputy president of the Supreme Court, Elyakim Rubinstein. Hundreds demonstrated outside the Knesset last Thursday, their concern that democracy was imperiled only exacerbated by police efforts to prevent their convoy from Tel Aviv reaching Jerusalem, ostensibly because it was breaching the virus-related regulations on social distancing — which it was not. 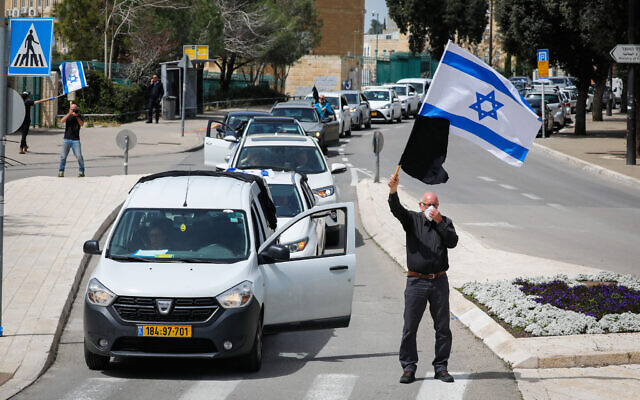 Israelis take part in a demonstration “to save Israel’s democracy” outside the Knesset in Jerusalem, March 23, 2020. (Olivier Fitoussi/Flash90)

As Edelstein consented to reopen parliament on Monday, an estimated 2,000 demonstrators congregated outside, demanding his resignation.

Concern over the challenge to democracy is hugely intensified by widespread mistrust of Netanyahu, who has spent two years battering away at Israel’s law enforcement establishments, strategically discrediting the police and the state prosecution for investigating and ultimately indicting him in three corruption cases. His trial, which was slated to begin last Tuesday, has now been postponed until May amid the virus emergency.

Moreover Netanyahu, since failing to win March 2’s election outright, has sought to claim a kind of victory nonetheless, by branding the 15 MKs from the mainly Arab Joint List who back Gantz for prime minister as “supporters of terrorism” who are not part of the “equation” when it comes to parliamentary arithmetic of majorities and minorities.

With the separation of powers still just about functioning, the Supreme Court on Sunday decided to put aside for the time being petitions demanding that Edelstein reopen parliament — since the speaker himself had already promised to do so on Monday. But it did rule Monday morning on a petition demanding that he allow the vote on his own job to go ahead — requiring him to hold that ballot by Wednesday.

And thus, for a few hours, it appeared that if Israel had been threatened by some kind of attempted political coup, our fractious democracy as usual had now been restored.

In the course of Monday, however, and as I write these lines, a growing chorus of voices in Netanyahu’s right-wing bloc — including Justice Minister Ohana and his predecessor Ayelet Shaked — are encouraging Edelstein to defy the court order, and continue to block a vote on the speaker’s post. Some of them are citing parliament’s exclusive right to determine when it convenes, when it votes, and on what; some are invoking Knesset bylaws that say a new speaker need not be chosen until a new government is approved; some are accusing the court of seeking to establish a “judicial dictatorship.”

And thus Israel’s democratic crisis — playing out in parallel to the coronavirus battle — far from being resolved, appears to be deepening.