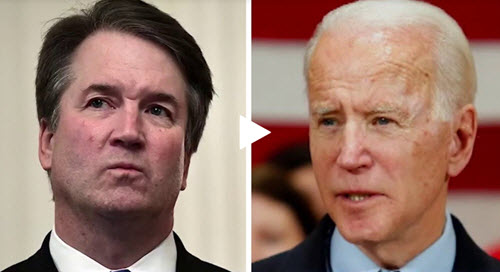 Former Vice President Joe Biden has made limited public appearances ever since the coronavirus outbreak has sent virtually the entire country into quarantine, but in the several interviews he has done for various television networks, he has yet to be asked about the sexual assault allegation made by his former staffer Tara Reade.

On March 25, Reade came forward in a podcast interview with progressive commentator Katie Halper about the alleged 1993 assault after having made previous claims last year about Biden’s pattern of inappropriate touching. While his campaign has denied that the assault occurred, Biden himself has yet to address it.

Since Reade’s first interview, Biden has done ten TV interviews, all of them dominated with questions about the coronavirus outbreak, the Trump administration’s handling of the pandemic, and his ongoing presidential campaign. None were about the allegation.

He appeared on a CNN town hall with Anderson Cooper on March 27, NBC’s “Meet the Press” with Chuck Todd on March 29, MSNBC with Yasmine Vossoughian on March 30, CNN with Brooke Baldwin and MSNBC with Brian Williams on March 31, ABC’s “This Week” with George Stephanopoulos on April 5, NBC’s “Today” with Craig Melvin on April 7, another one on MSNBC with Nicolle Wallace on April 11, and on MSNBC’s “Morning Joe” with Joe Scarborough and Mika Brzezinski, where he was accompanied by his wife, Dr. Jill Biden, as well as another CNN town hall with Cooper on April 16.

In fact, Sen. Bernie Sanders, I-Vt., who suspended his presidential campaign last week and officially endorsed Biden on Monday, was asked about Reade’s allegation before Biden himself during a CBS News interview on Thursday morning.

“I think it’s relevant and to talk about anything. And I think any woman who feels that she was assaulted has every right in the world to stand up and make her claims,” Sanders said on “CBS This Morning.” “I think that she has the right to make her claims and get a public hearing and the public will make their own conclusions about it. I just don’t know enough about it to comment further.”