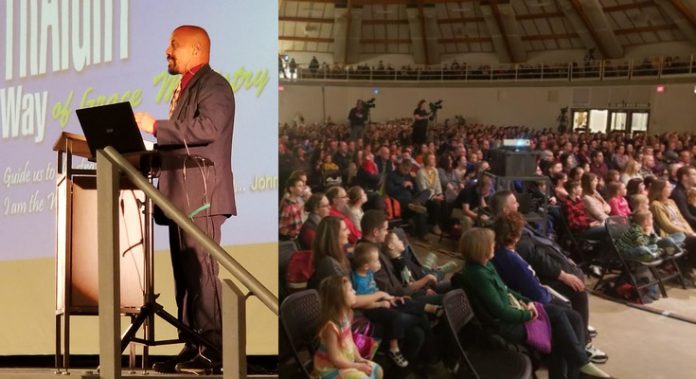 Usama noted that when you examine the early Muslim believers, they told Mohammed, ‘We believe!’  Mohammed’s answer was, ‘Do not say we believe but we submit/surrender.’

This point is critical to Usama’s presentation as he contrasted the beliefs of Islam with those of the Christian faith.  He began by examining…

The six pillars of Islam:

–The Shahada (That there is no god but Allah and Mohammed is his messenger.)

–Prayer 5 times a day in the Arabic language.

–Jihad for the sake of Allah.

As this program moved along Usama explained:

–Why Mohammed is not a prophet.

–What the Qur’an teaches about the Bible and God.

–Allah, the god of Islam vs. Allah for Arabic speaking Christians.

–The verse of the Qur’an that has Mohammed denying the crucifixion of Christ.

–Forgiveness and good works in Islam.

–The fate of all men and who controls it.