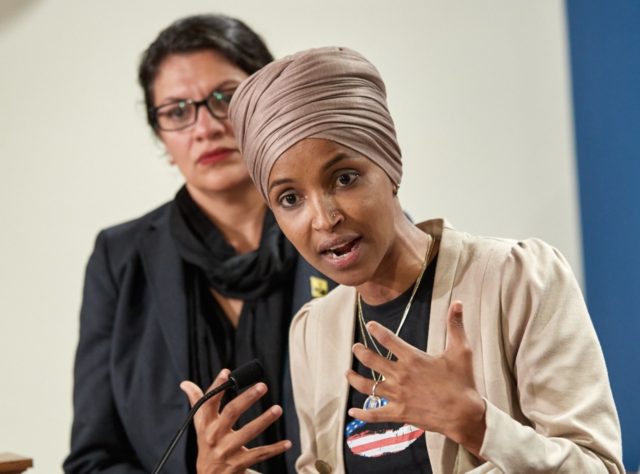 President Donald Trump criticized Democrats for their recent turn toward the anti-Israel left on Saturday, during a White House press briefing on the coronavirus pandemic.

Trump was asked about his retweet, earlier in the day, of a tweet by investigative reporter Paul Sperry challenging state and local authorities to treat mosques as they did churches:

State and local officials — primarily Democrats — have cracked down on drive-thru churches in recent weeks, including on Easter Sunday, and even when they have observed the federal government’s strict social distancing guidelines.

Trump argued that he did not believe there should be strict enforcement in mosques, but that he was pointing out the poor way that Christians were being treated in the U.S., to which he linked Democrats’ turn towards an anti-Israel foreign policy:

Trump: I would like to see that. And I just spoke with leaders, and people that love mosques. They love mosques, and I’m all in favor of that. But I would say that there could be a difference, and we’ll have to see what will happen, because I’ve seen a great disparity, in this country. I’ve seen a great disparity. I mean I’ve seen a very strong anti-Israel bent in Congress, with Democrats. It was unthinkable seven or eight or ten years ago, and now they’re into a whole different thing, between [Rep. Ilhan] Omar, and AOC. I say AOC plus three, add them on. You have, I mean, the things that they say about Israel are so bad. And I can’t believe it. Now — Just a minute. So I would be interested to see that, because they go after Christian churches, but they don’t tend to go after mosques. And I don’t want them to go after mosques, but I do want to see what their bent is.

Trump: No, I think that — I just had a call with imams, I just had a call with ministers, rabbis. We had a tremendous call with the faith leaders. No, I don’t think that at all. I am somebody that believes in faith. And it matters not what your faith is, but our politicians seem to treat different faiths very differently, and they seem to think, and I don’t know what happened with our country, but the Christian faith is treated much differently than it was, and I think it’s treated very unfairly.

Former Vice President Joe Biden embraced the endorsement Friday of the radical left-wing group J Street, which opposes Israel on most issues, and opposes most pro-Israel measures taken by the U.S., such as moving the embassy to Jerusalem.

Joel B. Pollak is Senior Editor-at-Large at Breitbart News and the host of Breitbart News Sunday on Sirius XM Patriot on Sunday evenings from 7 p.m. to 10 p.m. ET (4 p.m. to 7 p.m. PT). His new book, RED NOVEMBER, is available for pre-order. He is a winner of the 2018 Robert Novak Journalism Alumni Fellowship. Follow him on Twitter at @joelpollak.