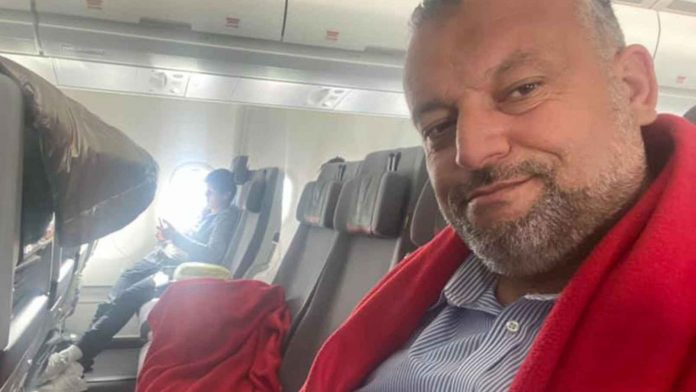 On February 15th, Hatem Fariz and his brother Hazem found themselves in Lisbon, Portugal, en route to Israel. It had been nearly 14 years since Fariz’s conviction for providing material support to Palestinian Islamic Jihad (PIJ), of which he was a member. He would go on to spend two weeks traveling to various locations inside the Jewish state, including the grave of one of his former alleged PIJ co-conspirators. Fariz was also pulled out of a plane by authorities, on his way home to the States. Question: Why would Israel allow such an individual – a convicted terrorist – into her country, especially when Israel had just warred with PIJ?

Hatem Naji Fariz is the Managing Director of the al-Qassam Mosque a.k.a. Islamic Community of Tampa (ICT), located in Temple Terrace, Florida. The mosque was named after Izz ad-Din al-Qassam, the man who was the inspiration for the founding of Palestinian Islamic Jihad. The individual responsible for the mosque, Sami al-Arian, was a PIJ co-founder who used the Tampa, Florida-area to create a terrorist network for the group, which included a children’s school, American Youth Academy (AYA), that is also still in existence.

In July 2006, Fariz pled guilty in federal court to providing services to associates of PIJ and received a 37-month prison sentence. According to the indictment against him, al-Arian and six others, Fariz “was a PIJ member” and did “conspire… to commit offenses against the United States… by making and receiving contributions of funds, goods, and services to or for the benefit of the Palestinian Islamic Jihad.”

The indictment further stated that Fariz and al-Arian were part of a PIJ enterprise and that “the enterprise members would and did commit acts of violence, intimidation, and threats against Israel, its inhabitants and others, including murders and suicide bombings, and solicit and cause others to do so, with the intent to drive Israel out of the territory from the Jordan River to the Mediterranean Sea and to end any influence of the United States in the Middle East.”

Last month, Fariz and his brother, Hazem, showed up in Israel, the two taking a tour through many parts of the country, including the Palestinian territories. Hazem, the brother, has referred to masked PIJ terrorists as “Gaza heroes.” Fariz recorded onto video much of the tour and uploaded it to Facebook.

From February 15-19, Fariz made posts about his time spent in Ramallah, including a visit to Masjid Abu Bakir Asadeek in the Turmus Ayya section of Ramallah.

On February 20th, Fariz posted on his Facebook page a note recognizing the 17-year anniversary of when agents from the FBI and Joint Terrorism Task Force (JTTF), guns drawn, rounded up Fariz and his alleged PIJ co-conspirators, during early morning raids. He wrote: “02-20-2003 @5am. And today is 02-20-2020. 17 years!!!”

On February 21st, Fariz was inside the Dome of the Rock, in Jerusalem. He did not post anything else for the next four days, until the 25th when he was back in Ramallah, having lunch with someone he refered to as “symbol of Palestinian resistance.” What is chilling is that from February 23-24, PIJ reportedly attacked Israel with over 110 rockets. Could Fariz have been in contact with the attackers?

From February 25-27, Fariz travelled through and took footage of Jerusalem, Bethlehem, Hebron, Kafr Qasim, Netanya, Mount Carmel, Haifa, Acre, Nazareth, Tulkarm and Jenin. During that time, he visited both the tomb of Izz ad-Din al-Qassam and the gravesite of Fariz’s alleged PIJ co-conspirator Sameeh Hammoudeh. Hammoudeh had co-founded the PIJ mosque and children’s school in Temple Terrace. Under Fariz’s Facebook photos at the cemetery, another of his alleged PIJ co-conspirators, Ghassan Ballut, wrote a message of blessing, which Fariz clicked ‘like’ on.

Following this lengthy trip, it seems someone finally took notice of Fariz and his background. On February 28th, Fariz boarded a plane in Lisbon, planning to head back to the States. However, he was thrown off the plane, before it could take off. Fariz described the situation, writing, “When the USA does not allow you to enter your own country of birth (highest level of stupidity and no organization in security). Just got pulled out of the plane in Lisbon Portugal no security clearance to enter the country lol. Spending the night here any recommendations for good places to visit? Of course all accommodations covered with your tax money.”

Question: Why would the Israelis, with all their enhanced security, allow a convicted member of Palestinian Islamic Jihad into her country, giving him full access to what seems to be all areas and repeated mobility between Israel proper and the Palestinian territories? This question is especially important, given the fact that Israel had warred with PIJ only a few months earlier.

Besides being the Managing Director of his mosque, Fariz is, as well, the group leader of what appears to be his mosque’s travel agency, the Adam Travel Tampa Hajj Group. Could Fariz have fooled the Israelis into believing that he was some kind of legitimate travel agent, on a group trip to the Holy Land?

Permitting Hatem Fariz into Israel is a danger to Israel and her surrounding areas. The fact that Fariz visited the tomb of PIJ’s inspiration, Izz ad-Din al-Qassam, is proof that Fariz refuses to give up his violent ideology against the Jewish state.

Both US and Israeli security services should be scrutinizing Fariz’s trip and investigate how such a major security breach could have been allowed to take place. Fariz ought to be placed on a ‘no fly’ list and be banned from ever entering Israel again.