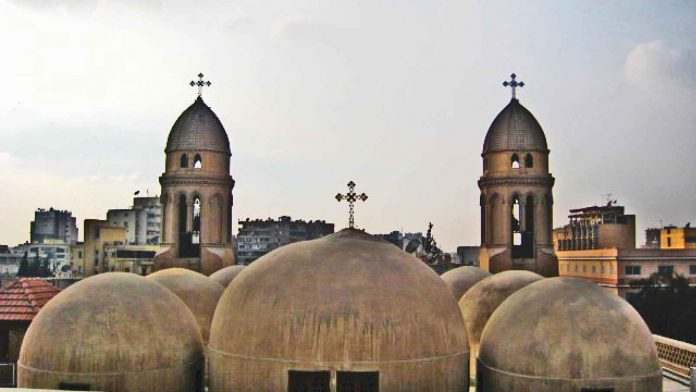 Raymond Ibrahim is a Shillman Fellow.  This article originally appeared on Coptic Solidarity

At a time when the lives of the people of Egypt have been, like the lives of most people around the world, disrupted by coronavirus; at a time when Egyptians, like others, are wearing masks, staying indoors and social distancing—a group of undeterred Islamic terrorists were preparing to launch a major terror strike on Egypt’s Coptic Orthodox churches during their holiest day of worship, this past Sunday, April 19, 2020.

On Tuesday, April 14, Egyptian security forces were involved in an hours-long gunfight with an Islamic terror cell ensconced in an apartment building in Cairo’s Amiriyah district, which is known for holding a large Christian population and several churches.  Some television stations aired footage of the firefight; many gunshots could be heard in the background.  In the end, seven would-be terrorists and one police officer were killed in the shootout.  Several ammunitions and automatic weapons were found and seized from their apartment.

Initial news reports presented the cell as takfiri—a reference to Muslim extremists who accuse, attack, and sometimes kill other Muslims for not being Islamic enough.  Others protested that the cell’s primary if not exclusive purpose was to murder Christians in their churches.

The Egyptian ministry has now confirmed that “the suspects were planning attacks on the country’s Coptic Christians during the Holy Week and Easter Sunday. Egypt’s Coptic Orthodox Christians, one the world’s oldest Christian communities, would celebrate Easter on April 19.”

Earlier, in a live phone call, a Coptic activist insisted that the terrorist cell’s “target was to kill Christians and bomb churches around their holy days, which, of course, we are accustomed to every year.”

Most notoriously, on April 9, 2017—Palm Sunday, which starts the holy week of Easter—two Christian churches were bombed during mass in Egypt; at least 50 worshippers were killed and 130 injured and/or mutilated (graphic images/video of aftermath here). Two days later, another terror attack targeting a Coptic Christian monastery was thwarted.

While there are many other such attacks, those that fail to claim lives are seldom reported in Western media.  For example, on April 12, 2015, Easter Sunday, two explosions targeting two separate churches took place in Egypt. Although no casualties were reported—hence only Coptic Solidarity reported it from Arabic media—large numbers could have resulted.   Similarly, on Sunday, April 5, 2015, as Christians were celebrating Palm Sunday, yet another church was attacked in Alexandria; gunmen in a vehicle opened fire on the church during the night injuring a police officer and two civilians.

It should be noted that other Christian holidays, especially Christmas, are also prime targets.  Thus a Cairo church was bombed leaving 27 dead around Christmas 2016.  On New Year’s Day, 2011—which Orthodox Christians usher in at church—another church was bombed, leaving 23 dead.

Why jihadists target churches around Easter and Christmas is obvious: not only do attacks on Christians during their most important holy days make a symbolic point; but because churches are often packed then, they also offer the greatest harvest in deaths.

Which leads to the great irony of this most recent but botched attempt on Christians during their holiest day: due to coronavirus, churches in Egypt, like mosques, are closed, including this on Easter Sunday.  Yet even this did not deter the seven now slain Islamic terrorists. So consumed by blind hate, they either overlooked this fact, or else had moved on to “plan B”—opening fire on and massacring Christians on sight, in the streets and/or perhaps through their homes’ windows, during Resurrection Sunday.