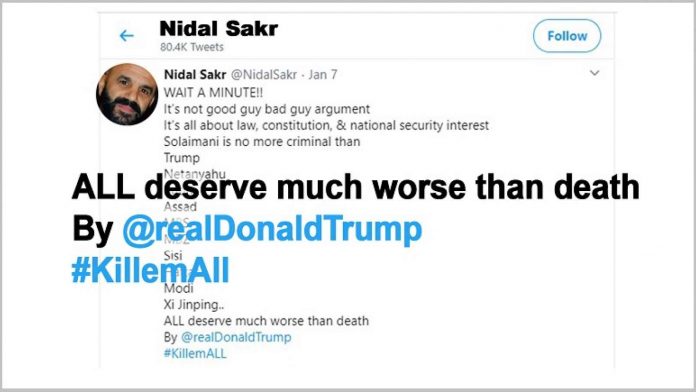 Joe Kaufman, a Shillman Journalism Fellow at the David Horowitz Freedom Center, is Chairman of the Joe Kaufman Security Initiative and the 2014, 2016 and 2018 Republican Nominee for U.S. House of Representatives (Florida-CD23).

Since Muslim Brotherhood operative and Chairman of The March for Justice Nidal Sakr arrived at the US border, in March 2014, after fleeing his home in Egypt, he has been obsessed with President Donald Trump, at one point calling for President Trump’s execution. This past January, he once again spewed his venom at Trump, saying that the President along with certain other world leaders “deserve much worse than death” and telling the President to “kill ‘em all.” At what point do federal authorities consider the unhinged Sakr a threat and send him off to face justice?

Nidal Mohamed Sakr’s entire life has been built around radical Islam, beginning with his childhood, growing up with a mother who carried weapons and ammunition for the Muslim Brotherhood. Around 1970, Sakr joined a Brotherhood terrorist cell in Jordan that was conducting paramilitary operations against Israel. He was recruited into the cell by Abdullah Azzam, the future mentor of Osama bin Laden and co-founder of al-Qaeda. Sakr has said that he personally knew bin Laden. Four decades later, Sakr would find himself organizing Brotherhood rallies in Egypt and advising Brotherhood leaders, during the Arab Spring.

When Abdel Fattah el-Sisi came to power, Sakr fled Egypt, and days after being detained and handcuffed at America’s border, Sakr was sentenced to death in Egypt for the murder of an Egyptian police officer. Sakr, who was born in Providence, Rhode Island, has since stayed in the US, moving between Miami, Florida and Huntington Beach, California, where his The March for Justice organization, which uses a Brotherhood Rabia sign for its Twitter profile photo, is now incorporated (It was previously in Miami). While in America, Sakr has obsessively targeted President Trump, whom he has referred to as an “enemy of God.”

In February 2017, Sakr warned President Trump on Facebook, “U come to ISLAM Or ISLAM WILL COME TO YOU.” In September 2017, Sakr wrote on Facebook: “FACTS ARE FACTS. Patriotic Americans Will Keep After SOB Donald Trump Until We Nail His ass. YOU WATCH!!” And on October 30, 2017, Sakr tweeted, “EXECUTE SOB TRAITOR Donald Trump” and “Donald Trump, You Are TOAST… I GUARANTEE IT.”

Sakr then targeted the US, herself, which he has referred to as “evil America” and the “largest Global Terrorist.” In August 2018, he wrote, “LET ME BE CLEAR. Like it or Not, America MUST/WILL PAY 4 War Crimes/Crimes Against Humanity/Support of Dictators/Terror Creation.” In November 2018, he tweeted (in Arabic), “Jihad will topple all American dogs.” And in December 2018, he tweeted “Down with America!!!”

It is now 2020, and Sakr began the year with a new round of vile messages for President Trump. Following the January 3rd US assassination of Iran Quds Force Commander Qassem Soleimani, who had been responsible for the deaths of hundreds of American troops, Sakr tweeted, “Dear Donald Trump… With all due respect… YOU’RE FU&#@ED… BIG TIME!!!!!!” Days later, he used the Soleimani killing to target Trump and a number of world leaders, providing the President with a ‘kill list’ for them.

It wasn’t the first time Sakr had wished death upon foreign heads of state. Indeed, he had previously posted photos on his social media of President Sisi’s head in a noose and Prime Minister Netanyahu being beheaded. As well, he regularly has called for violence against any Arab leader, whom he considers to be against the Palestinian and/or Egyptian Muslim Brotherhood cause.

And though it may seem strange to see someone offer a ‘kill list’ to someone else, while including that someone else’s name on the list – in this case, President Trump –  with regard to Nidal Sakr, it is not strange at all. When discussing Sakr, we are talking about an extremely pathological individual, whose thoughts at times are unhinged and uncontrollable.

Sakr also spent the beginning of 2020 promoting terrorists. On February 1st, he tweeted praise for Leila Khaled, a member of the Popular Front for the Liberation of Palestine (PFLP), best known for her role in the 1969 hijacking of TWA Flight 840. He posted (in Arabic), “[M]ore than 40 years ago, a Palestinian woman hijacked a plane and commanded operations… and you still want to sell Palestine. When your men become like our women, we will try to hear your point.”

On February 2nd, Sakr tweeted a video from the Palestine Information Center, the Hamas-affiliated media group, showing all of Israel’s cities being deleted in favor of a singular Dome of the Rock with the caption (in Arabic), “Palestine will remain Arab and Islamic and the [Trump] Deal of the Century will fall.” In March, he as well posted material from the Hamas-affiliated Shehab News Agency, and on March 29th, Sakr retweeted a post vilifying Israel made by Senior Hamas official Bassem Naim. In April 2018, Sakr, himself, wrote, “So called ‘israeli CANCER’ MUST BE OBLITERATED AND IT WILL BE.”

An individual, 1. who was recruited into a terrorist cell by the future co-founder of al-Qaeda, 2. who knew Osama bin Laden personally, 3. who is wanted for murder in Egypt, 4. who calls for a US President’s execution, which is a jailable offense, 5. who tweets, “Down with America!” 6. who sends a ‘kill list’ to the President containing the names of numerous world leaders, and 7. who posts praise for a terrorist plane hijacker and states that Israel will be “obliterated,” must be considered a credible threat. To think otherwise and downplay the threat would be criminally negligent and inconceivable.

It has been six years since Sakr was allowed to enter the US, after fleeing his ancestral home in Egypt (His mother was Egyptian). Had he not been born in the US, his terrorist interactions would have been enough grounds to deny him entry. Now that he is here, he must be recognized for the threat that he is. It is only a matter of time before he (or someone else) acts on his incitement. Why is he allowed to move about the United States freely? Why is he not behind bars or been extradited to Egypt to serve out his murder sentence? Demanding he account for his threats against the President would be a start.