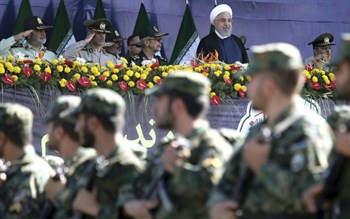 An expert on national security reports that American military commanders are planning to destroy an Iraqi militia responsible for a number of deadly attacks against U.S. forces.

OneNewsNow spoke to Clare Lopez, former vice president of research and analysis for the Center for Security Policy, about the developing campaign underway at the Pentagon. As the current founder/president of Lopez Liberty, her past experiences help provide invaluable insight into the “whom” Washington is holding responsible for persistent attacks against the U.S. and coalition partners in Iraq.

“In the wake of the takedown of Quds Force Commander Qassem Soleimani on January 3, 2020, Iran has been trying to figure out how to respond [in retaliation against the U.S.],” Lopez explains. Abu Mahdi al-Muhandis, deputy commander of Kata’ib Hezbollah, was also killed in the targeted strike against Soleimani.

As a result of their deaths, says Lopez, “[the Iranian regime has] always been clear from their pronouncements and their activities that they absolutely would respond [to the U.S. strike].”

And according to Lopez, they typically strike back through their Shiite terror proxy militias. Since U.S. forces and coalition personnel remain in Iraq, there have been ample opportunities for Iran’s proxies to attack bases where they are positioned. Since January, Lopez recalls “a steady drumbeat of at least 15 attacks” that have been reported publicly. These attacks have resulted in injury and death.

Kata’ib Hezbollah has been the leading Iraqi Shiite terror militia in the region, according to Lopez. While the name sounds similar to Lebanese Hezbollah, they are not one in the same. Lopez identifies Lebanese Hezbollah as “Iran’s first and primary Iranian Shiite terror proxy” after the 1979 revolution, and asserts that the terror group is responsible for training many of the Iraqi militias.

“The overall collection of Shiite terror militias in Iraq are called Hashd-e Shaabi, or you might see the name in English: Popular Mobilization Units or PMUs,” the national security expert explains. These militias date back to 2014 when volunteers were called upon to come together to fight against the Islamic State’s deep advance into Iraq. “[Kata’ib Hezbollah] was one of these militias formed when ISIS was rampaging across Iraq and defeating the Iraqi military,” she adds.

The deaths of Soleimani and al-Muhandis have rattled the proxy network for a number of months, leaving them “trying to recover, to find new leadership, to find a way to overcome the divisions and rivalries among their own numbers,” Lopez states – adding that “[they are trying] to unify to better counter us, the United States and our coalition personnel.”

Thus, a new unified resistance movement is developing, called the Iraqi Resistance Front – and according to Lopez, it’s an alliance.

“It’s a very informal alliance of militia proxies [that doesn’t] play well with others, [as there are] a lot of rivalries among them,” she tells OneNewsNow.

Nevertheless, they are trying to unify – and within the Iraqi Resistance Front, Lopez points out a new militia group called Usbat al-Thairen (Leagues of Revolutionaries).

Esmail Ghaani, Soleimani’s successor, is currently positioned as commander of the Iranian Quds Force. In turn, he commands the Iraqi Shiite terror militias, which include Kata’ib Hezbollah and Usbat al-Thairen.

The latest development regarding these groups includes U.S. intelligence uncovering information that the resistance network – specifically comprising Kata’ib Hezbollah and Usbat al-Thairen – was planning an imminent attack against U.S. forces and coalition forces in Iraq.

“It was apparently set to launch in the current timeframe, perhaps this month of April,” she offers, concluding that “[uncovering the plot and publicizing the threat] has likely thrown a monkey wrench into their planning.”

“[Even so],” Lopez contends, “the U.S. and coalition partners in Iraq probably can expect a number of additional escalating and intentionally lethal attacks against U.S. forces, the bases where our forces are posted.” And these attacks, she predicts, will commence under the command of the Iranian regime, specifically the Quds Force.

According to Lopez, the U.S. is prepared for the mounting tension, as “the Pentagon is announcing that it’s drafting plans for a large-scale campaign to actually destroy Kata’ib Hezbollah [and by default], Usbat al-Thairen.”