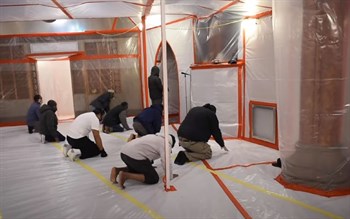 An expert on Islam sees a disparity in the enforcement of the rules pertaining to the coronavirus pandemic upon Christian and Muslim worship centers across the country – especially in New York.

A place of worship in Syracuse, New York, that had been a Roman Catholic church for over a century became a mosque almost six years ago – the Mosque of Jesus, Son of Mary to be exact. As the coronavirus pandemic still looms and places of business begin to reopen around the country, a number of innovative measures reportedly have been taken to keep the mosque’s doors open for daily Muslim prayers during this month of Ramadan (April 23 to May 23) – and Syracuse.com commends them for doing such.

Meanwhile, churches and synagogues across the country have been forced to close their doors, despite equally creative measures to avoid mandatory shutdowns. These measures include social distancing, even to the extent of holding a drive-in prayer service in a parking lot like that of Temple Baptist Church in Greenville, Mississippi. Rather than observing a call to prayer and worship, everyone attending the Temple service was issued a $500 fine. In another striking example from Kentucky, churchgoers were met with nails preventing entry into the parking lot of Marysville Baptist Church for an Easter service.

And in an extreme case last month, churches and synagogues in New York City were threatened with permanent closure if they violated Mayor Bill de Blasio’s stay-at-home mandate.

So, as to the application of government directives to Christian, Catholic, or Muslim houses of worship, does one stay-at-home order or supposed “nonessential” gathering outweigh the other? Not according to Robert Spencer, director of Jihad Watch. He tells OneNewsNow “the impulse to worship is universal among human beings,” arguing that “even professed atheists worship something.”

“[And] to disallow this is to cut against human nature in ways governments should never dare to do,” he adds.

Restricting religious gatherings in the United States is a clear violation of the First Amendment, Spencer explains, especially when “elementary precautions can be taken for worship services to proceed.”

Still, the Jihad Watch director expects government officials to “tiptoe” around Muslim gatherings, making it less likely to enforce coronavirus restrictions when it pertains to the location of their acts of worship.

“This,” he says, “is likely because they know that if they move to restrict Muslim gatherings, they will be denounced as ‘racist’ and ‘Islamophobic,’ and raked over the coals by a compliant media establishment.”

While protecting their personal and professional lives, “[government officials find it] easier to let Muslims do as they wish and pick on the Christians only,” the Shillman Fellow at the David Horowitz Freedom Center contends.

Spencer argues that, on the one hand, Christians make every effort to abide by the law when it doesn’t infringe on their fundamental, God-given rights. But on the other hand, when it pertains to protecting their rights, “[Muslims] are highly skilled at claiming victim status – which is more valuable than gold in today’s society.”