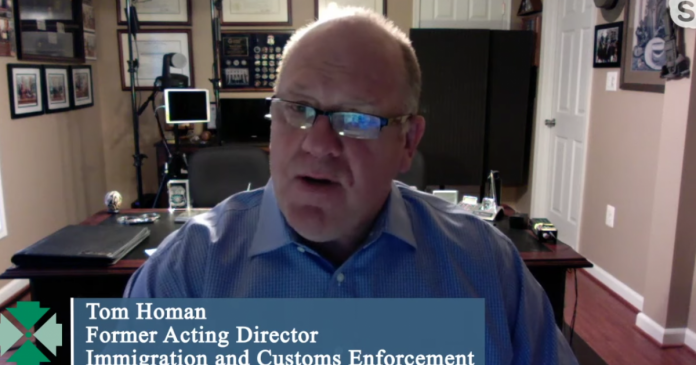 Former Immigration and Customs Enforcement Acting Director Tom Homan broke down the consequences of a potential Joe Biden presidency on border security during an online event with the Center for Immigration Studies, explaining that a Biden administration would jeopardize all of the progress President Donald Trump has made in securing the southern border within the last three years.

“All the success President Trump has made, 80% decline on the southern border, goes away, Day One, if he doesn’t retain the presidency,” said Homan of the prospect of Biden defeating Trump in the 2020 election and winning the presidency.

Homan went on to warn that large groups of illegal immigrants would seek to infiltrate the United States on an immediate basis in the event of a Biden presidency, citing similar attempts at mass illegal immigration that have followed legal developments such as the temporary suspension of President Trump’s “Stay in Mexico” asylum regulation.

“The day they said we’re going to stop the remain in Mexico program, hundreds, hundreds of illegal aliens in Mexico were lining up to come across the border. It was within hours of that decision that we were looking at another surge. It’s proven itself.”

Homan has decades of experience in immigration law enforcement, starting as a border patrol agent in 1986. He was appointed the acting director of ICE in 2017 by President Donald Trump, retiring from the agency in 2018.

Homan also predicted that a Biden presidency would bring an immediate end to the construction of new border wall, of which 170 miles is currently being implemented.

Watch the full interview with Homan, in which he discusses his upcoming book “Defend the Border & Save Lives” here. Homan was speaking with Mark Krikorian, the executive director of the Center for Immigration Studies.