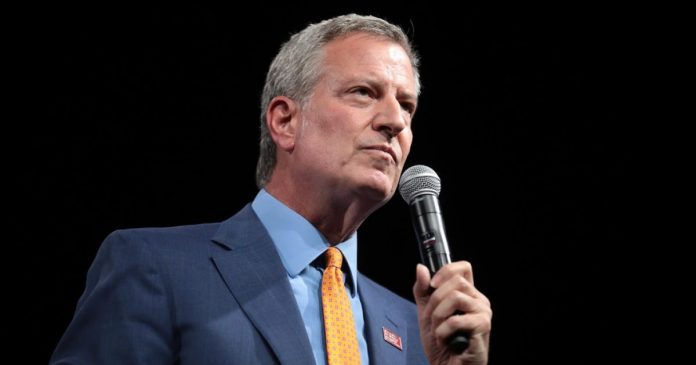 Interesting imagery of a certain infamous leader pops into mind when reading this tweet. (And Twitter followers were quick to point out that imagery, mocking him with memes and such.)

More importantly, this isn’t the first time he’s openly targeted a particular group of religious people during this pandemic.

De Blasio was on camera just a couple weeks ago saying that he would shut down churches permanently, if they didn’t comply with his draconian orders.

A small number of religious communities, specific churches, specific synagogues are unfortunately not paying attention to this guidance [to close] even though it’s been so widespread…. If you go to your synagogue, if you go to your church and attempt to hold services after having been told so often not to, our enforcement agents will have no choice but to shut down those services….

The NYPD, Fire Department, Buildings Department, and everyone has been instructed that if they see worship services going on…they’ll inform them they need to stop the services and disperse. If that does not happen, they will take additional action up to the point of fines and potentially closing the building permanently.

It’s clear there is a bias here.

De Blasio celebrates those Muslims who are being good little boys and obeying daddy government. The focus is on how they are doing great and are just a wonderful group of people.

Out of the same mouth, De Blasio deals with Christians and Jews by threatening them for not doing exactly what he demands.

Maybe Muslims are just that much better at following the rules. That is possible, I guess.

But considering the regularity with which Democrats have shown bias in favor of Muslims over the years, that’s not likely the case. It’s far more probable that this is just more of the same intentional bullying of the “religious right” for political purposes.

Bill de Blasio is doing exactly what the Left constantly claims to be a mortal sin. He is discriminating against certain groups and giving a pass or privileges to others.
Share Our Work