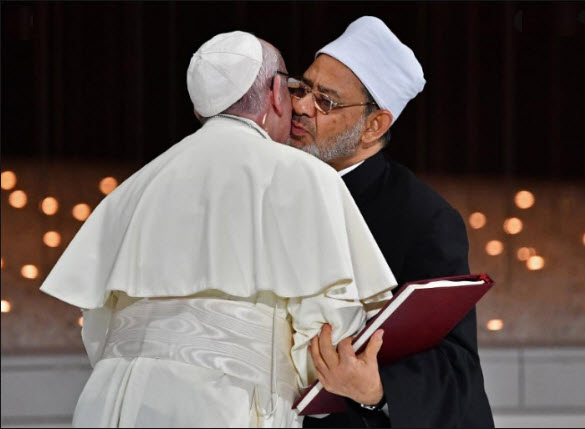 Some Church leaders are slowly waking up to the fact that the Chinese Communist Party is no friend to the Church.  When will they realize that the same is true of Islam?

The Church has adopted a see-no-evil approach to Islam which has had the effect of lending legitimacy to tyrannical Islamic States, while fostering a sense of complacency about Islam on the part of ordinary Catholics.

Catholic educators bear much of the responsibility for this complacency.  You’ve heard the saying, “a little learning is a dangerous thing.”  Well, a “little learning” is precisely what Catholic students get:  enough to let them think they understand Islam, but not enough to allow them to think critically about the subject.

A “little learning” is especially dangerous if it’s used to indoctrinate instead of educate.  And it’s difficult to see how the positive, one-sided view of Islam presented in Catholic schools is anything but indoctrination.

Take the Five Pillars of Islam.  Catholic educators never cease to talk about them because they give the impression that the two faiths—Islam and Catholicism—are similar.  The Five Pillars are:  profession of faith, prayer, charity (alms giving), fasting, and pilgrimage.  Sounds fairly Catholic doesn’t it?  But the educators don’t tell the full story.  Let’s look at the fine print that accompanies three of the pillars.

How about prayer?  Catholic assume that we should pray for whoever is in need of prayer.  But that’s not the case in Islam.  When prayers were asked for the victims of terrorist attacks in France, a group of Belgium Imams responded by saying that it’s forbidden to pray for the souls of non-Muslims.  The truth is, Islam is built on a sharp distinction between Muslims and non-Muslims.  Which becomes evident when we look at another of the pillars—charity.

Charity?  In Muslim Pakistan, several incidents have been reported of Hindus and Christians being denied government food aid during the coronavirus crisis.  Why?  Because sharia law states that “It is not permissible to give zakat [alms] to a non-Muslim.”

Pilgrimage?  Muslims are required to make a pilgrimage to Mecca at least once in their lifetime if able.  Can Catholics also visit the Grand Mosque in Mecca—the holiest site in Islam?  Sorry. Non-Muslims are not even allowed to enter the city of Mecca, let alone the Grand Mosque.  Maybe Islam and Catholicism are not so similar after all.

Catholic students are being misled about the true nature of Islam.  Which means that they will be ill-prepared when they encounter the other side of Islam—the side that was withheld from them by their teachers. And ignorance of Islam carries far more serious consequences than being denied entry into Mecca.

At the Turning Point Project, we try to present a fuller picture of Islam.  We believe that Catholics should not be content with just a little learning about one of the most consequential issues of our times.  Please help us to continue this work.  It’s an uphill battle, but we fight this battle so that our children and grandchildren won’t have to. This is the final day of our appeal. So, if you’re able, please make a contribution to support this work.  Prayers are also appreciated.