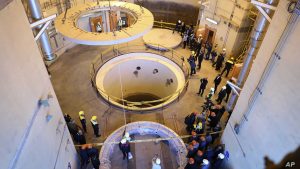 There is a growing chance that by October, the nuclear deal with Iran, otherwise known as the Joint Comprehensive Plan of Action (JCPOA) will be dead. Under the deal with the U.S. China, Russia, Germany, Britain and France, Iran purported to accept limitations on its nuclear program. These limitations included capping its low enriched uranium stockpiles at 300 kg, restraining its enrichment activities and accepting the UN’s International Atomic Energy Agency’s right to inspect its declared and undeclared nuclear sites.

In exchange, the five permanent members of the UN Security Council and Germany agreed to cancel the Security Council sanctions resolutions that had been imposed on Iran due to its illicit nuclear activities over the previous decade.

The JCPOA, which was never formally signed, was anchored in UN Security Council Resolution 2231, which was passed immediately after the JCPOA was concluded.

At the time, the JCPOA was vociferously opposed by U.S. lawmakers from both sides of the partisan divide. Their opposition owed to the fact that even if Iran abided by the restrictions on its nuclear activities prescribed by the JCPOA, it would still be able to develop a full-blown nuclear arsenal within ten to fifteen years.

To placate the deal’s opponents, and secure its approval in the Senate, the Obama administration added two safeguards to Resolution 2231. The first imposed a five-year embargo on conventional weapons sales to Iran.

Now both of these safeguards are being tested.

In May 2018, due to incontrovertible evidence of Iranian bad faith both during the negotiations process and following the implementation of the JCPOA, President Donald Trump announced that the United States was washing its hands of the nuclear deal. Secretary of State Mike Pompeo set out the U.S.’s new “maximum pressure campaign” that replaced the JCPOA as the central element of the U.S.’s policy towards Iran.

The strategy of maximum pressure involves applying harsh U.S. economic sanctions against Iran’s oil, financial and shipping sectors in particular. The goal is to weaken the Iranian economy in order to destabilize the regime and minimize its financial capacity to fund its nuclear operations and its terror proxies in Iraq, Syria, Lebanon, Gaza and beyond.

The other parties to the JCPOA did not follow America’s lead. To the contrary, they sought to undermine U.S. sanctions. Led by Germany, the EU clung every more tightly to the nuclear deal. Germany, France and Britain attempted to create a financial mechanism that would enable Iran to bust U.S. sanctions. They also continued to develop Iran’s heavy water reactor at Fordo.

The Russians, maintained and intensified their alliance with Iran in Syria. China breached the U.S. sanctions and continued importing Iranian oil and gas. Currently, China is working closely with Iran in Afghanistan on behalf of the Taliban.

The Europeans, Russians and Chinese have all been playing for time in the hope that Trump loses the presidential election in November. The presumptive Democratic presidential candidate, former vice president Joe Biden has pledged that if elected, he will return the U.S. to the nuclear deal and end U.S. economic sanctions against Iran.

The problem for all of these parties is that time and the facts aren’t on their side. The Iranian regime which they are so keen to keep afloat is not playing along with them. Instead, it is systematically and openly breaching all of its commitments under the JCPOA. In March the UN’s International Atomic Energy Agency revealed that between November 2019 and March 2020, Iran increased its store of low-enriched uranium from 373 kg. to 1050 – more than three times the quantity permitted under the agreement.

The IAEA also reported that Iran had increased the number of advanced centrifuges capable of enriching uranium to prohibited levels in operation by approximately twenty percent since last November.

Earlier this month, the head of Iran’s Atomic Energy Organization Ali Akbar Salehi announced that Iran was building two more nuclear reactors at Bushehr. He added that “A new generation of centrifuges would soon come online at the Natanz fuel enrichment plant.”

Salehi explained that Iran is now in full breach of the JCPOA. “Nuclear activities, as well as research and development on the nuclear fuel cycle, uranium conversion, and enrichment (including production and storage, are being carried out without any restrictions.”

Iran’s apparent race to develop the ability to build a nuclear arsenal on demand – or what has been dubbed, “breakout capacity” – is happening in the context of the quickly approaching deadline for the conventional arms embargo imposed under Resolution 2231. The embargo will expire on October 23.

Over the past six months, Pompeo has stated repeatedly that the U.S. will not permit the embargo to be lifted. According to U.S. intelligence agencies, Russian defense firms have already concluded deals to sell Iran advanced aircraft, tanks and air defense systems the moment the embargo is lifted.

In a press briefing on Wednesday, Pompeo set out how the administration intends to prevent it from being lifted. Pompeo explained that the administration is pressuring the Europeans to put forward a Security Council resolution calling for the arms embargo to be extended even as Russia has vowed to veto any such resolution.

In light of the Russian position, the only way to extend the arms embargo is to cancel the JCPOA entirely by triggering 2231’s snapback sanctions clause, which no side can veto.

To prevent the Americans from triggering the snapback clause, since May 2018, the Europeans, Iranians, Russians and Obama administration officials have claimed Trump’s decision to withdraw from the agreement cancelled America’s standing as a party to the JCPOA and so abrogated the U.S.’s right to trigger the snapback sanctions.

Last year, the State Department’s legal department published a brief rejecting this position. The U.S. action did not abrogate Security Council Resolution 2231, and Article 10 of the resolution clearly names the U.S. as a party to the agreement.

Pompeo added, “We’re going to…makes sure that come October of this year, the Iranians aren’t able to buy conventional weapons that they would be given what President Obama and Vice President Biden delivered to the world in that terrible deal.”

As the sides set up for a confrontation, the fact is that the administration will come out on top under all circumstances. This is true for three reasons.

First and foremost, the U.S. will benefit if the administration invokes the snapback sanctions articles because it is the right thing to do. As the IAEA reported and Salehi acknowledged, the Iranians are comprehensively breaching all of their commitments under the JCPOA. There is no substantive justification for maintaining the fiction that the deal is still salvageable. There is clearly no substantive justification for selling Iran conventional weapons.

This brings us to Iran’s defenders, and particularly the EU and the Democrats.

If the U.S. triggers the snapback sanctions the move will critically harm the European Union which, under German leadership has consistently advanced a harshly anti-American foreign policy. If the EU responds to a U.S. move to trigger the snapback sanctions by insisting the U.S. has no authority to act, the position will boomerang.

Even before the appearance of the coronavirus pandemic, many EU member nations were rejecting the EU’s authority to dictate a unified anti-American, pro-Iranian foreign policy.

In February 2019, Poland co-hosted a summit on Iran in Warsaw with the U.S. Then EU foreign policy commissioner Federica Mogherini refused to participate in the conference that bought more than a dozen key EU states along with Israel, Saudi Arabia and the UAE together to discuss the threat Iran poses to global security.

The EU’s utter failure to manage the coronavirus pandemic, has struck a massive blow to the EU. Its incompetence has convinced millions of Europeans who had previously supported the EU that they have nothing to gain from it. Their national governments are the only instruments to protect their lives and liberty.

The EU’s weakened position was given expression earlier this month when several EU member states angrily rejected an attempt by current EU foreign policy commissioner Josep Borrell to pass a resolution condemning the Trump Middle East peace plan and Israel’s intention to apply its law to parts of Judea and Samaria in the framework of the Trump plan.

If the EU subverts a U.S. effort to restore UN sanctions on Iran, its action is liable to destroy whatever is left of Brussel’s power to dictate a unified EU foreign policy.

Perhaps to block this prospect, and perhaps due to Iran’s reduced economic prospects after two years of U.S. sanctions, Thursday Germany announced is finally outlawing Hezbollah’s “political” wing and blocking its operation in Germany. To date, Germany blocked the EU from recognizing Hezbollah’s military wing as a terrorist organization and so enabled the Iranian proxy army to raise funds and draft operatives throughout Europe. Germany’s action Thursday indicates that aware of the dangers to the EU, Germany may support a U.S. move to impose the snapback sanctions and end the JCPOA.

Then there is Biden. If the administration moves to implement the snapback sanctions and so end the ill-begotten JCPOA, which was the centerpiece of U.S. foreign policy in Obama’s second term, Biden and the Democrats will be harmed no matter how the move plays out. If the UN blocks the U.S. move, the Trump administration will claim – rightly — that Obama and Biden deliberately lied to the American people when they said the snapback sanctions provision would ensure Iran could not get away with breaching the JCPOA.

If the administration is successful, and snapback sanctions are imposed scuppering the JCPOA, its success will expose the madness at the heart of Biden’s pro-Iranian Middle East policy. It will demonstrate that the key component of the Obama-Biden foreign policy was to provide the U.S.’s most dangerous enemy in the Middle East with the ability to develop a nuclear arsenal while building itself into a regional hegemon.

It isn’t clear how events will transpire in the coming weeks and months. But as things now stand, the Trump administration seems to recognize that there is no downside to triggering the snapback sanction articles in Resolution 2231 and ending the JCPOA by October.