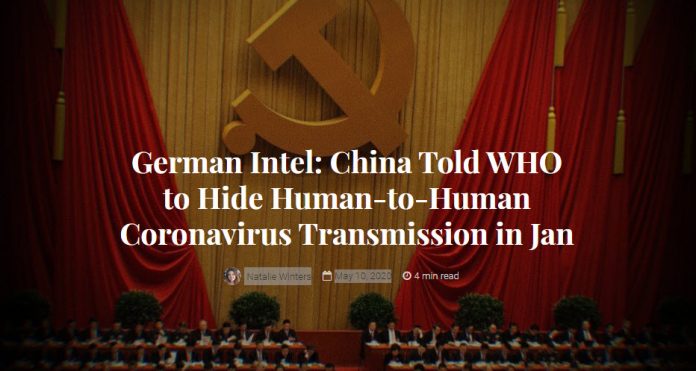 The Chinese Communist Party forced the World Health Organization (WHO) to refrain from notifying the world about human-to-human transmission of the novel coronavirus, causing a “four to six-week delay in fighting” the virus, according to Germany’s Federal Intelligence Service.

The recently-released report corroborates the Trump administration’s narrative that China purposely withheld this critical information, delaying the world’s ability to respond: “According to the BND, China has urged the World Health Organization (WHO) to delay a global warning after the outbreak of the virus at the highest level. On January 21, China’s leader Xi Jinping asked WHO chief Tedros Adhanom Ghebreyesus to hold back information about a human-to-human transmission and to delay a pandemic warning.”

This follows the Department of Homeland Security alleging the CCP’s intentional delay in notifying authorities of the outbreak was to stockpile medical supplies now in a global shortage.

It’s also the latest proof of WHO’s subservience to the CCP, sacrificing global health by acquiescing to Beijing’s demands.

Roughly one week after WHO assisted in the CCP-led cover up, they praised China’s “transparency” in a now-debunked statement from the body’s director, Dr. Tedros Adhanom Ghebreyesus:

“We appreciate the seriousness with which China is taking this outbreak, especially the commitment from top leadership, and the transparency they have demonstrated, including sharing data and genetic sequence of the virus. WHO is working closely with the government on measures to understand the virus and limit transmission. WHO will keep working side-by-side with China and all other countries to protect health and keep people safe.”

And Dr. Tedros is a repeat offender when it comes to covering up infectious disease outbreaks.

Even The New York Times wrote in 2017 that he helped with “covering up three cholera epidemics in his home country, Ethiopia, when he was health minister — a charge that could seriously undermine his campaign to run the agency.”

His actions were straight from Beijing’s playbook: “China denied for months in 2003 that it had a serious outbreak of lethal respiratory disease in its southern cities. That outbreak ultimately became known as SARS, for severe acute respiratory syndrome, and spread to several other countries, including Canada,” the article also noted.

While establishment media outlets have covered Germany’s findings, they’ve willfully ignored this incriminating discovery. Unsurprisingly, they’ve amplified the only portion of the report that conflicts with the US intelligence, the theory that coronavirus originated in a Wuhan laboratory.

Not only did the CCP botch its own coronavirus response, silencing doctors who alerted co-workers about the virus, but its calculated cover up impaired the ability of other governments to respond accurately, costing thousands of lives and taking an immeasurable economic toll.

It proves that holding the CCP accountable for coronavirus is not merely a talking point; it’s a justified response to the virus it spawned, spread, and lied about.